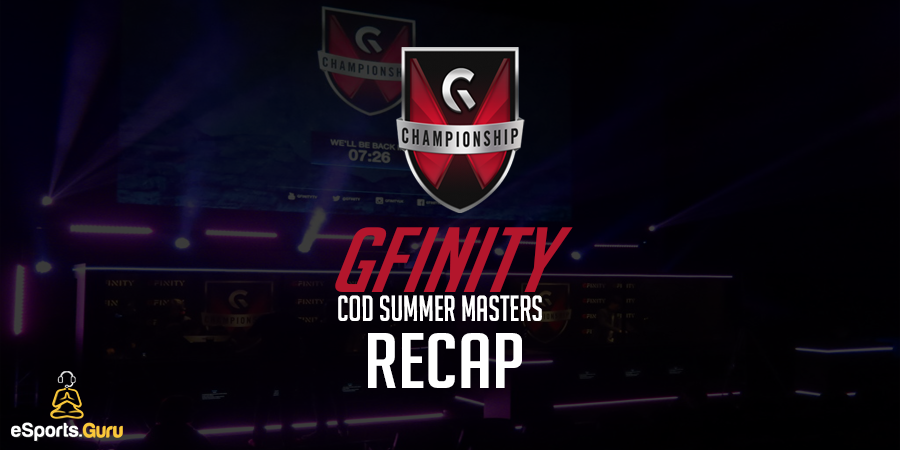 16 of the best European and North American Call of Duty: Advanced Warfare teams competed this past weekend in London at the Gfinity Summer Championship. In case you missed it, here is a recap of the event and the main storylines to take away from it. We’ll start from the end.

Unsurprisingly to many, FaZe Clan took the championship over OpTic Gaming. Taking a look at their road to the finals and starting in Pool Play, FaZe defeated Liquid Gaming and Team Infused 3-0 each. Neither team seemed to threaten FaZe in the slightest way, and they moved on to Bracket Play with the 1-seed in their group. Once there, FaZe took down Team EnVy 3-1 and beat Team Infused once again in the semifinals, this time by a score of 3-1.

OpTic’s road to the finals was a bit more interesting, as they faced a very tough test in Pool Play. Sweeping VwS Gaming 3-0, OpTic would have to beat Team EnVy to win their group. The match went to a Game 5, as the two teams were neck and neck the entire series, but OpTic took the 3-2 win. In their quarterfinal series against Team Vitality Storm, OpTic once again faced a tough task. Each game besides the first came down to the wire, but Vitality fell 3-1. In the battle of the OpTics, OpTic Gaming easily reigned victorious with a 3-0 sweep of OpTic Nation in their semifinals match.

So, the Grand Finals that everyone was waiting for: OpTic Gaming vs FaZe Clan. Would OpTic prove that UMG Dallas, where FaZe swept them in the Grand Final, was a fluke? Or would FaZe prove that they were as dominant as they looked? Just something to note, this Grand Final was a best-of-seven instead of the usual best-of-five, so a team would need to win four maps to win it all. OpTic came out to a quick 2-0 lead in the series, easily winning both maps and sweeping the Search and Destroy 6-0, but FaZe would not go down without a fight.

In Comeback Uplink, a game mode and map combination that once meant an automatic win for OpTic, FaZe showed their worth and got their first win of the series to make the map count 2-1 in OpTic’s favor. Then came Retreat Hardpoint, OpTic’s current automatic win. The OpTic squad did everything they were supposed to do, and made the map count 3-1 in their favor. One map away from winning the tournament, everyone thought it was over. Well, everyone except FaZe that is.

Clayster and company won the next three maps in nail-biting fashion, with stellar performances from everyone on the team. The FaZe squad won the series 4-3 and were crowned champions of the event.

I already went over this, but it is still a big deal. OpTic Gaming have been the powerhouse team for all of Advanced Warfare, and FaZe beating them in the past two events is huge. We’re seeing complaints and excuses from their players that we never expected to see, and their mentality is not looking good. Meanwhile, the guys on FaZe are looking extremely impressive. Winning the last two events and having an overall map count of 40-7, FaZe is looking scary.

A European team places top four, but it isn’t who you think

Vitality Storm and Epsilon eSports.EU both had fantastic tournaments no doubt, but neither of these stories European giants placed top four at the event. Instead, it was Team Infused. With the new addition of MarkyB, their roster that already consisted of QwiKer, LXT, and Urban was completed. The team surprised many people by defeating Team Kaliber in Pool Play and they kept it going by taking down Team eLevate in bracket play to advance to the semifinals. Their run was sadly ended by FaZe.

It’s worth noting now that Vitality have released Joshh and Watson, and picked up LXT and Urban. This leaves Infused looking for two, and Joshh and Watson without a home. Let’s not forget the Swanny has left Epsilon.NA and moved back to Europe for personal reasons.

Did any teams surprise you? How did your favorite team do? Let us know in the comments below, on our Twitter @eSports_Guru or on my Twitter @esn_DeeGee. Be sure to follow us to keep up with all things eSports.