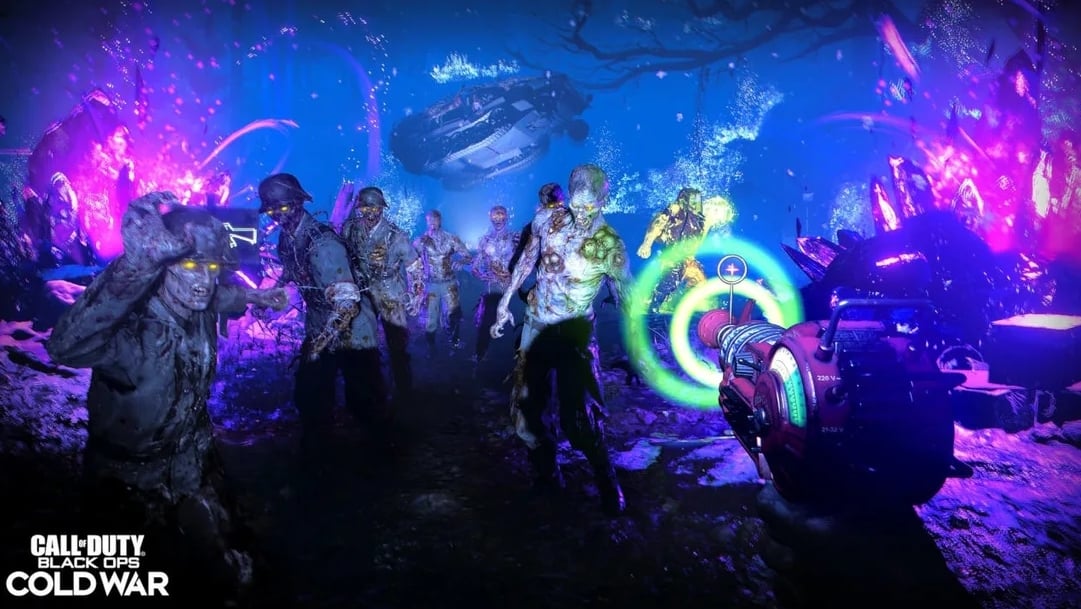 The smell of rotting flesh and the sound of screaming groans fill the air once again—Call of Duty: Black Ops Cold War’s Zombies mode has been revealed.

Treyarch pulled back the curtain on an all-new Zombies experience, revealing what players can expect when the game launches on Nov. 13. And there’s a lot to be excited about.

Half the fun of Zombies is discovering things for yourself, so Activision didn’t reveal too much. But there’s still plenty of new information about the co-op mode.

Here’s what has been revealed so far.

Nacht der Untoten is back, with a twist

The first map, Die Maschine, is set in the same building as Nacht der Untoten, the very first Zombies map in Call of Duty: World at War. But the area is expanded, allowing players to explore its depths to find a new story and secrets beneath.

The story in Black Ops Cold War’s Zombies is a continuation of the story that came to a conclusion in Black Ops 4. This time, it’s set in the early 1980s and things are new and different in exciting ways.

Here’s the full teaser of Black Ops Cold War’s Zombies story. The rest will be left up to the players to discover on their own.

As part of Requiem, a CIA-backed international response team led by Grigori Weaver from the original Black Ops story, operatives explore a World War II bunker that hasn’t only been ravaged by time…

While fighting to suppress the unnatural phenomena at this graffiti-skinned, boarded-up bunker, Requiem team members investigate what lies beneath this structure that’s been left to crumble after decades of disservice. Should they succeed, Requiem may uncover a cache of decades-old secrets that upend the global order.

At the same time, a Soviet-led division and rival to Requiem, the Omega Group, enters the fray. The Omega Group also has a keen interest in studying and harnessing the unexplained events and anomalies manifesting around the globe.

Between Requiem and Omega Group, there are plenty of characters who may aid or hinder your journey, while others have separate, unknown agendas that will be up to players to discover. Among this cast, there is one particular contact – Sam – who seems eager to share intel discovered from deep within the KGB.

Bolstered by various pieces of intel that players can track in-game, this incredible Zombies story will start to unfold in mysterious and unexpected ways…

Instead of having specific characters, Black Ops Cold War’s Zombies mode will let you play as Operators from multiplayer. This includes characters like Frank Woods, Lawrence Sims, Russell Adler, and many more.

This time around, Zombies will include the battle pass. This means that experience gained in Zombies will count toward battle pass progression. The Zombies mode will also use loadouts, so players can craft their own weaponry and equip them before heading into a round.

Kind of like Warzone, Zombies weapons will now include rarity, meaning that the rarer a gun is, the stronger it’ll be. Rarer weapons will have higher damage output and more equipped attachments

Weapon rarities include Common/Loadout, Uncommon, Rare, Epic, and Legendary. Loadout weapons will all be Common rarity, but they can be upgraded via random Wall Buys and the Mystery Box.

“Charge them up by killing zombies, then deploy them in times of desperate need,” Activision said. “From offensive buffs to abilities that aid in evasion or healing and reviving, these Field Upgrades are made to fit numerous playstyles and situations.”

Classic perks return “with a reimagined Cold War aesthetic.” Activision has confirmed Juggernog and Speed Cola so far. But now there’s no longer a limit to how many perks can be consumed, so your loadouts might get pretty crazy.

Perks at launch include:

Support items will occasionally pop up out of the Mystery Box, as will Scorestreaks like the Chopper Gunner.

Support items at launch include:

A new option in the Zombies experience is Exfil. Black Ops Cold War adds the ability to escape if you’re becoming overrun by the undead hordes. If you try to leave, zombie spawn rate will increase, but “you should expect to earn some rewards” if you’re able to escape with your life.

Treyarch confirmed that all post-launch content will be free in Black Ops Cold War Zombies. The co-op mode will also feature cross-platform play, cross-gen, and cross-progression.

With a good amount of new Zombies information to digest, it’s now left to the players to hunt down every Easter egg, secret, ending, and weapon when Call of Duty: Black Ops Cold War releases on Nov. 13