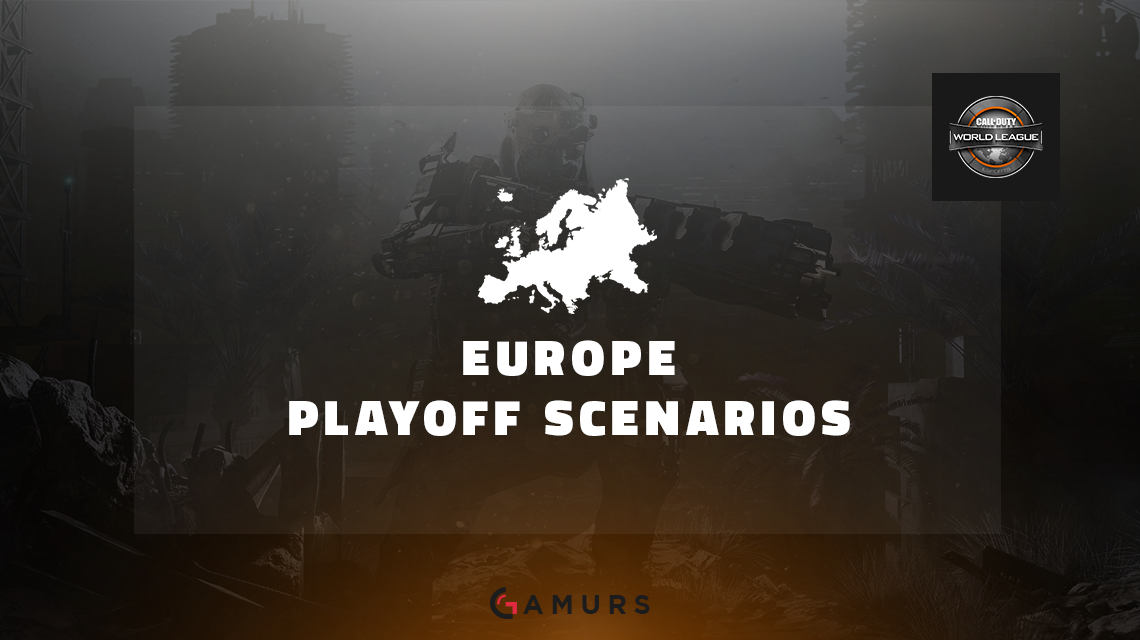 6/21/16 – Only two days and eight matches remain in the European Call of Duty World League. As usual, several teams are fighting for their spot in the playoffs as it comes down to the wire. Who will make it and who won’t? Before we look at the teams that still have an uncertain future, let’s see who are already in the playoffs and who do not even have a shot.

HyperGames (clinched) – Secured the #1 seed in the playoffs. Last match vs. Infused is just for bragging rights.

Infused (clinched) – Will finish at either #2 or #3. Matches vs. HyperGames and Supremacy.

Splyce (clinched) – Have secured a spot in the playoffs that may be as high as #2. Matches vs. Millenium and Epsilon give Splyce the opportunity to break some hearts if other scenarios play out correctly.

Giants (eliminated) –  Their last match vs. Epsilon can help ruin their playoff hopes.

LDLC (eliminated) – Pointless match vs. Vitality to finish the season.

Vitality (eliminated) – Were eliminated from playoff contention weeks ago (0-16). Last matches vs. LDLC and Supremacy, giving Vitality two final chances to earn a win in Stage 2.

This leaves four teams whose futures are still uncertain. When it comes down to making it to the playoffs, there is one match that determines the fate for everyone involved.

Exertus (8W-9L, 1 match left)-  Exertus NEED to defeat Supremacy. On top of that, they then need Supremacy to lose their other two remaining matches. Otherwise, a tiebreaker will go into effect. If Exertus lose this match, the other three teams still on the line will make it to the playoffs. Their match vs. Supremacy might as well be the match of the week.

Supremacy (8W-7L, 3 matches left) – The match vs. Exertus is important and their match vs. Vitality is a sure-win. As long as they win one, Supremacy will at least be in a tiebreaker scenario. Defeating Exertus is preferable and ensures a spot in the playoffs, but wins over both Infused and Vitality will also do the trick.

Epsilon (9W-7L, 2 matches left) – With the best record of the teams in contention, Epsilon qualify with a win vs. either Splyce or Giants. Losing both matches will land them, at the very least, in a tiebreaker scenario. With wins over both Splyce and Giants, Epsilon could go to the playoffs as the 3rd seed if Splyce also lose their match vs. Millenium.

Millenium (9W-8L, 1 match left) – After winning the Stage 1 Finals, Millenium have had a falling out this season. They haven’t reached the bottom of the barrel yet though. After nearly securing their playoff spot in a nail-biter vs. Infused, Millenium need to defeat Splyce to ensure their place in the playoffs. They can also hope for an Exertus loss or three losses from Supremacy.

The remaining matches can go either way and will be exciting to watch! Seeding for the playoffs is a whole other story, however, with the only seed locked down being HyperGames as number one. Catch the rest of the European Call of Duty World League action on twitch.tv/callofduty and let us know how you think the rest of the matches will play out in the comments below or on Twitter @GAMURScom.