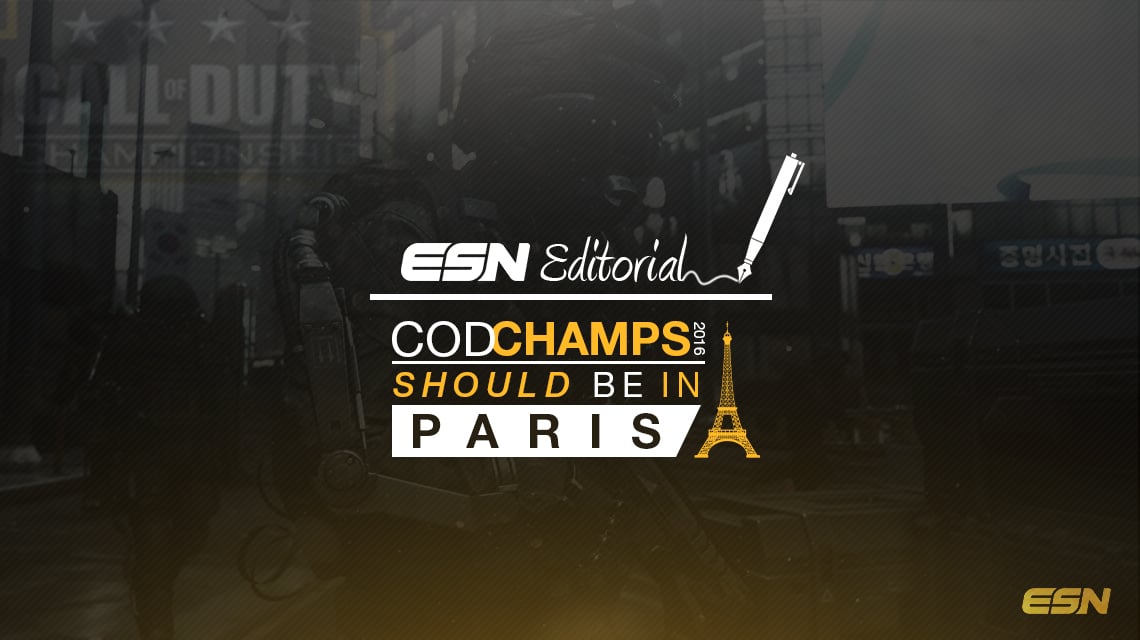 The annual Call of Duty World Championship has been held in Los Angeles for three consecutive years now. It’s an excellent location because it’s home to one of the most accessible international airports in the world and some of the largest global entertainment industries. There are many benefits and reasons why the event should continue to be held in Los Angeles, but I believe it’s time for a change.

This past weekend, the Electronic Sports World Cup hosted it’s annual CoD tournament in Paris, another very prominent location for international travel. They rented out a local concert hall called Zénith de Paris. The venue can hold about 7,000 people, and ESWC filled it to capacity with some of the most enthusiastic fans of CoD eSports you will ever see.

Just by viewing some of the photos from Day One at the event, you can tell the crowd was incredible.

Now this isn’t a stab at the crowd for the 2015 World Championship this past March. I was there, I was very impressed by the fans in attendance. However, there were times when the stands were completely empty during some of the most important matchups of the tournament. Once OpTic Gaming was knocked out early, the venue was pretty much empty until the finals.

Many of the players from America participating in the ESWC event went to Twitter to express their admiration for the fans in Paris. It seemed that everyone was overwhelmingly impressed and many said there was a certain feel to the event that has never been experienced before.

In addition to the atmosphere in Paris this past weekend, it would be a huge step forward in getting the rest of the world heavily involved in CoD eSports. It’s no secret that this game is dominated by North America. The majority of teams, fans, and profit all come from the United States. In my opinion, this is one of the reasons CoD eSports can’t reach the level of CS:GO and other worldwide phenomenons.

If Activision were to move the location of the World Championship to Paris, or any other major city in Europe, they could enter into an underdeveloped demographic. eSports in general is more prominent in regions outside of the United States. The fact that CoD eSports hasn’t progressed and gotten more popular in European countries is alarming for the future of the business.

From a public relations and promotion standpoint, Activision and co. can also benefit from just a general change in scenery. Not much has changed during the event these past few years. Getting some more media attention by introducing new elements to the venue could spark an increase in viewership and attendance.

Something needs to change in order for CoD eSports to progress to the level of other prevalent eSports titles. I believe that the World Championship event should be moved to Europe. The crowd at ESWC proves that there are people in that region that care about the game and want to be a part of it. We have neglected to give Europe the attention they deserve in our efforts to promote CoD eSports, now’s our chance.

I propose that we also increase the significance of the US National Championships. In 2014, there was no prize money for the event. This year the prize money was irrelevant, only at $10,000. In addition to the qualification purpose of the regional events, there should be a substantial prize factor and more prestige for winning it. It would set the stage for one crazy World Championship in Europe, and give new meaning to the terminology presented at the events leading up to it.

There are a lot of things that would help propel CoD eSports to the next level, such as microtransactions toward prize pools, more roster restrictions, more developer support, and more worldwide events. Moving the event to Europe has a lot of upside and not a lot of downside. It would be nice to see at least one of them done.