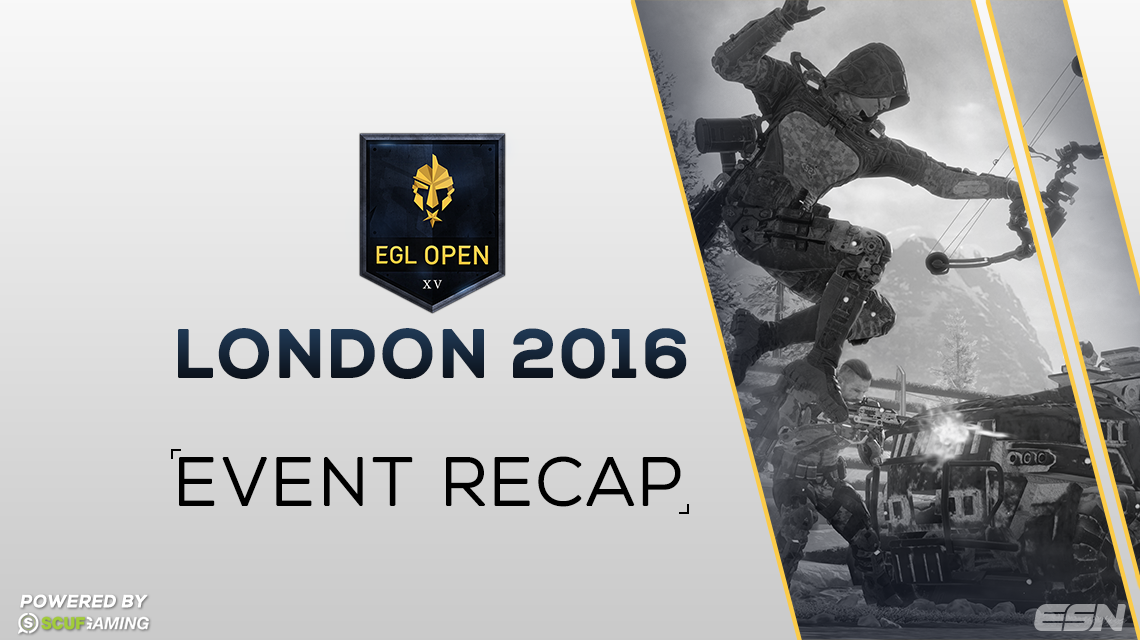 The European Gaming League Open – London 2016 has completed, and the European scene is looking relatively easy to predict. The $25,000 tournament had little-to-no surprises, but it was still packed with fierce competition and strong games.

Before we get into the main storylines from the tournament, let’s jump straight into the Grand Final results:

Team Infused win the EGL Open – London 3-2 over Epsilon eSports. Congratulations to Infused, as they came into this tournament regarded as the best European team by most players and fans, and walked out with a cemented title. With consistently strong play from all of the top teams, Infused stayed on top.

Only a few questions are in the air right now surrounding the European scene after these first few events have been completed and the Call of Duty World League is coming into its final week of play. The landscape isn’t hard to survey, as the skill gap between the upper echelon and, well, everyone else, is large.

The best teams in Europe had no problems in the group stage, each not dropping a single map by the time bracket play began.

From there, Infused dropped one map on the road to the finals, including a 3-0 victory over fellow top-four team Splyce . Epsilon eSports and Millenium only dropped one map on their separate ways to the semi-finals, but playing against each other proved to be a bit more of a challenge. Going the distance, Epsilon took the series 3-2. Infused, Epsilon and Millenium are the upper echelon and it will be very difficult for any other teams, even Splyce, to catch them.

Challenger teams don’t have a whole lot to be happy about for this event, but a couple of the squads performed slightly above expectations.

A Challenger team made up of relatively unknown amatuer players and former professional player Josh “ Watson ” Watson, Exertus eSports managed to take down World League squad Team Vitality 3-2, and took a map off of Epsilon before falling 1-3. It seems even the underdog win just wasn’t enough for the team though.

Whether Watson is more annoyed with his team or himself is yet to become clear, but he leaves the weekend on a sour note. In a strange situation, TCM Gaming opted not to play the consolation match against Exertus for a 5-6th placing, so Exertus was given the win.

Originally known simply as Team Tempo, Rampage Tempo is a top-tier Challenger team taking the European scene by storm. Placing well in every online Challenger event they have taken part in, this event was their first LAN together and they did not disappoint. This team of unknowns is one of the few shining lights outside of the World League in Europe.

At the EGL Open – London, Tempo took second place in their group under TCM and advanced to bracket play. From there, they pulled off the only other upset in bracket play besides the Exertus win over Vitality. Even if it was over the bottom-dwellers of Team-LDLC , Tempo defeated a World League team 3-2 before falling 0-3 to Infused. Because TCM opted not to play the consolation match against Exertus, rather than put Tempo at a disadvantage in the Challenger division points system, exceL eSports agreed to give Tempo the win.

The Tempo players are, understandably, all thrilled with their final placing.

The only question left: can their success carry over into World League qualifiers?

*The consolation match for 3rd place was not played or the score was not reported, so this placing is not confirmed.

What did you think of Infused’s win at the EGL Open – London this weekend? Did any teams perform better or worse than you expected? Let us know in the comments below, or on our Twitter @eSportsNation and be sure to follow us for all of your eSports needs.