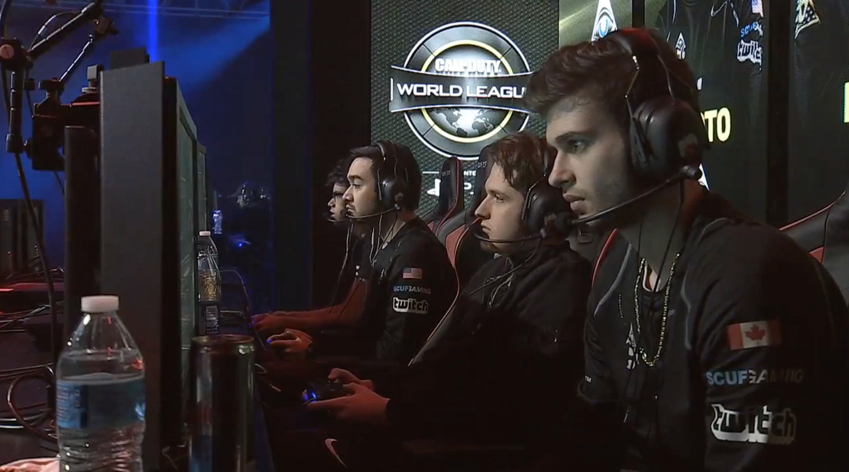 The first day of Group Blue action in Stage Two of the Call of Duty World League Global Pro League was full of great matches and dominating performances—and day two was no different.

Ghost Gaming continued their impressive win streak, while Enigma6 pulled off an improbable reverse sweep against FaZe Clan on Saturday.

Day two began with FaZe sweeping Elevate. The Europeans have struggled mightily so far in the second season of the CWL Global Pro League, and their troubles continued on Saturday. FaZe took Scorch Hardpoint 250-229, Crusher Search and Destroy 6-2, and Throwback Uplink 10-3 to earn their second series victory of the weekend.

But the undisputed match of the day came in the final series of the night between FaZe and Enigma6. FaZe Clan started out hot with wins on Throwback Hardpoint and Retaliation Search and Destroy.

Then the series shifted to Throwback Uplink.

Enigma6 was up 5-4 with mere seconds remaining in the game—until FaZe’s Dillon “Attach” Price scored a miraculous buzzer beater to force overtime. FaZe actually scored in 2:12 on the first side, but E6 responded with a one-point throw in 54 seconds, securing the map three victory.

On Retaliation Hardpoint, Enigma6 made an insane comeback to win the map 250-224 and push the series to a game five—the first winner-take-all map of the weekend.

The final map was Crusher Search and Destroy, and FaZe actually jumped out to an early 3-0 round count. But Enigma6 responded by winning four straight rounds of their own before FaZe could tie the game up at 4-4.

E6 won the following round to push the game to match point, and in round 10, Nicholas “Proto” Maldonado fell off the map. Facing a man disadvantage, Kade Jones clutched up for E6, securing three kills in a row to give Enigma6 the 6-4 map win and 3-2 series victory.

With this win, E6 and FaZe are both 2-2 heading into the final day of action. FaZe holds a slight lead in the standings over Enigma6, however, with FaZe having a 9-6 map count compared to E6’s 7-8 record.

Ghost Gaming remain undefeated at 4-0, so they have essentially qualified for the Stage Two Playoffs, barring any crazy tiebreakers on Sunday. Elevate, on the other hand, has been eliminated from playoff contention—the Europeans still haven’t won a single map all weekend.

Championship Sunday will begin tomorrow (July 9) at 2pm ET when FaZe Clan faces off against Elevate for the second time.