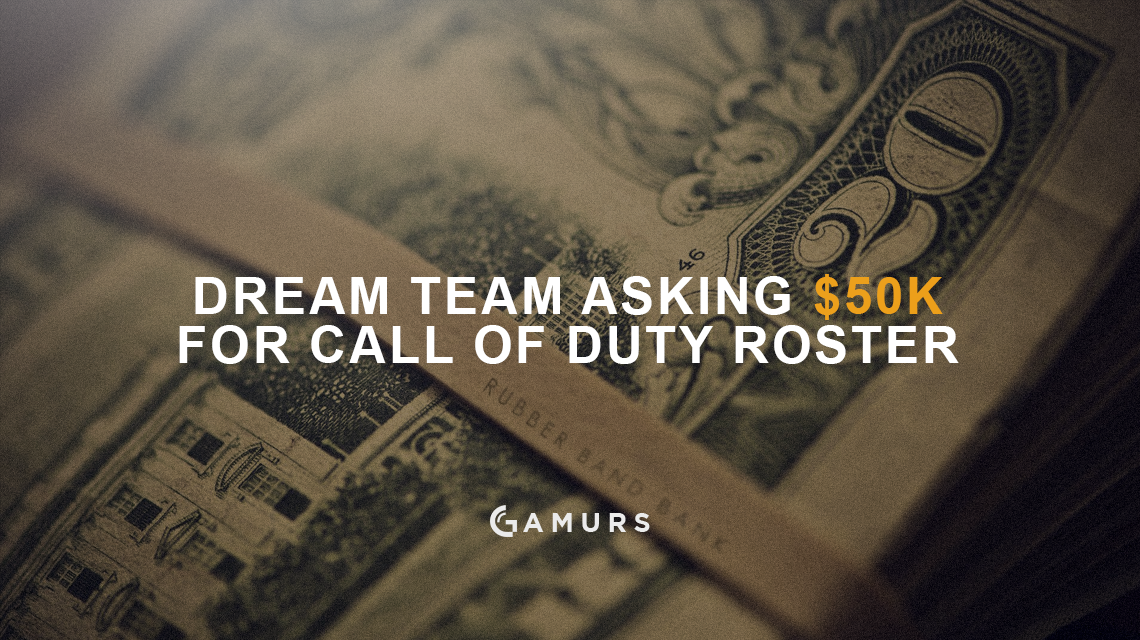 According to sources, Dream Team owners are asking for $50,000 USD for their Call of Duty World League roster.

Dream Team players originally announced they would no longer be representing the organization on June 15. Then, on July 6, the Dream Team organization announced the public sale of the roster. At the time, one week remained in Stage Two of the Call of Duty World League and Dream Team had not yet secured their spot in the playoffs.

Since then, ex-Dream Team managed to qualify for the Stage Two playoffs and eventually placed second. Their impressive placing earned a direct invitation to this year’s rendition of the Call of Duty Championship, to be held at Call of Duty XP on Sept. 2-4. Last weekend, the roster attended MLG Orlando under the name “Ground Zero” and placed outside of the top-eight (top-12).

Because the sale went public before ex-Dream Team qualified for the Stage Two playoffs, the asking price has likely varied quite significantly. The team’s future had not yet been decided and a direct invitation to the Call of Duty Championship was a longshot due to the fact that they were almost relegated from the Call of Duty World League in Stage One. At the time the offer went public, the selling price was likely lower, but risk was quite high. It has now reportedly increased to $50,000 and the price appears to be driving buyers away.

Due to the price of team transfers not typically being public information, it is difficult to compare the asking price for the ex-Dream Team roster to previous sales. However, in comparison to Counter-Strike: Global Offensive teams and League of Legends teams, the price is quite low. For reference, FaZe Clan made their debut in CS:GO by acquiring a roster from G2 Esports for $700,000, the most expensive CS:GO sale to date. Prices are much higher in League of Legends, where North American LCS teams now go for over $1 million.

It is not apparent how many organizations have put in offers with Dream Team, but more than a month has passed since the sale went public. Now, less than a month remains before the Call of Duty Championship, the largest Call of Duty event of all-time with a $2 million prize pool. If an esports organization is interested in purchasing the ex-Dream Team roster, they must do so quickly.

Josh Billy is a long time Call of Duty fan. Contact him via email at [email protected] or on Twitter @Orbit_CH3MISTRY.