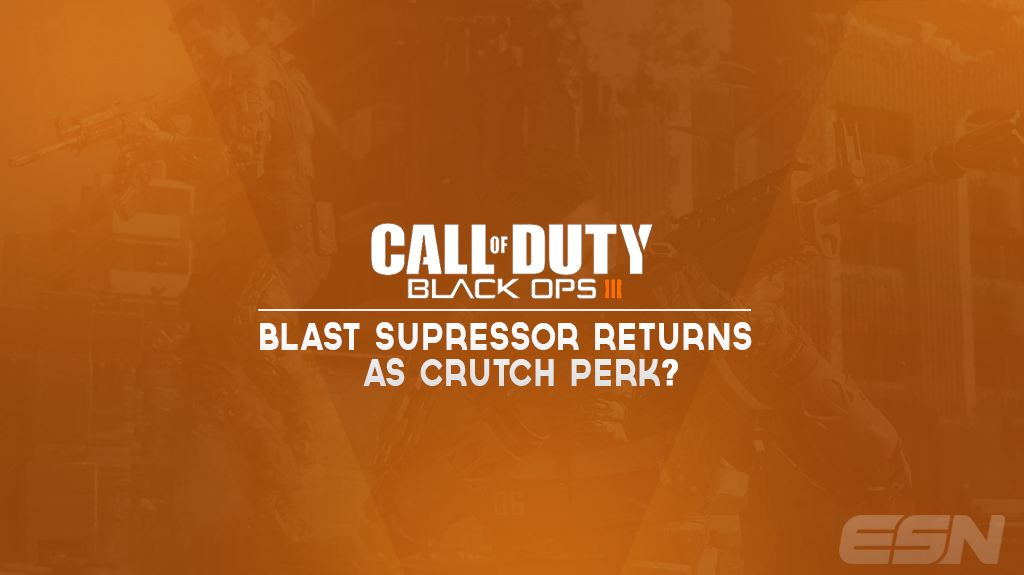 As showcased throughout Call of Duty®: Advanced Warfare, we got to witness a tier-three perk become a necessity within Call of Duty eSports’ competitions. Treyarch Studios has reinserted Blast Suppressor into their upcoming title, Call of Duty®: Black Ops III. But the argument of whether or not it is a crutch perk continues on.

For those who are unfamiliar with the term, “crutch perk,” it is a perk that one must utilize in order to not be held at a disadvantage, similar to the former tier-two perk, Toughness. The popular argument is that similar perks should be built-in to the game rather than taking up a slot in your Create-a-Class, allowing you to explore your other options for perks.

What’s there to suppress?

Black Ops III’s version of Blast Suppressor does two things: removes your ping from the minimap when boosting and suppresses your thruster sound. The betas description stated that “No mini-map signature when thrust jumping. Thruster sound is suppressed.” Thruster sounds weren’t suppressed in Advanced Warfare when the perk was operated, so this is an upgrade. Now if you have Blast Suppressor selected in a class, you can no longer be heard and only seen first-hand. Within Black Ops III’s beta, there was a noticeable difference between the way thrust jumping showed up on your minimap in comparison to Advanced Warfare. Only large boosts; ones that use up more than half of your gauge, will appear on an opposing team’s minimap as a small rippling blip. The blip happens very quickly and is harder to notice in Black Ops III, especially within respawn-based gamemodes like Hardpoint, Domination, Capture the Flag, etc. This means that you can still perform smaller thrust jumps, slides and wall runs comfortably without the fear of being noticed, aside from being seen or heard of course. Note that within all of the Black Ops III betas, sliding did not appear on the minimap with or without the perk, unlike Advanced Warfare. It’s not really considered a thrust mechanic within Black Ops III, more so a cybernetic enhancement to your specialist character, because “it didn’t ping on the radar once so ever, which was a little bit strange” as stated by the popular Call of Duty YouTuber, Brad “Drift0r” Overbey, in one of his recent videos. In Advanced Warfare, we didn’t have the luxury of character enhancements; players just had the Exoskeleton Suit and their Exo Abilities such as Overclock, Hover, Mute, Stim, etc.

Blast Suppressor is not as bad now

Blast Suppressor is not as much of a crutch perk as it was in Advanced Warfare. It will still play an important role in sound suppression alongside it’s tier-three brother, Dead Silence, when it comes to the gamemode of Search and Destroy. Being a non-respawn gamemode that’s often played as a deciding round in a best-of-five series, competitors will still be using every advantage they can get over their opponents. Personally, I feel this will change Search and Destroy in a good way. It will force players to chose between the tier-three perk combinations of Dead Silence and Blast Suppressor or Dead Silence and Tactical Mask, or players utilizing more tactical counter-equipment like Trophy Systems in Search and Destroy. It’ll probably come down to roles and preferences. https://www.youtube.com/watch?v=2Qx7lboMZSk On the other hand, respawns are not as minimap-dependant and “with all that kind of craziness going on you’re probably not going to need Blast Suppressor.” Bullets, tactical and lethal equipment and much more will be cycling throughout a match, and “you probably won’t be able to hear the little thrusts over the explosions.” Players will be focusing on the minimap mainly for teammate and enemy locations. With the new movement system that Treyarch has implemented, ground fights are more practical in this game, unlike the aerial dogfights we used to see. The gauge system forces players to use ground-level, traditional movements for at least 50-percent or more of the fights. As Drift0r states, the minimap blip/ping “is not very distinct like Advanced Warfare.” As aforementioned, they are subtle and easy to miss. Another noticeable difference is the fact that minimap pings are not aimed towards a small location as Advanced Warfare’s were. In Black Ops III, the ripple extends a little farther, forcing your opponent to search a larger quadrant to find the actual player. This was most likely changed in order to balance the game more for a player who doesn’t utilize the tier-two perk. Blast Suppressor’s features definitely seemed to have improved, along with the side effects of not using the perk. It doesn’t seem to be as much of a crutch perk within Black Ops III, if you consider it still to be one.

Blast Suppressor is in no way a crutch perk. – Drift0r

I’m sure we’ll still be seeing many players within the CoD community using it within certain gamemodes, but for now, I can see people dealing without it. It’s no longer a huge disadvantage. Be sure to note that everything is still subject to change before the game’s official release on Nov. 6, 2015. Do you believe that Blast Suppressor is still a crutch perk in Call of Duty®: Black Ops III? Let us know in the comments. Stay up-to-date with further Black Ops III news over at our Twitter – @eSportsNation.