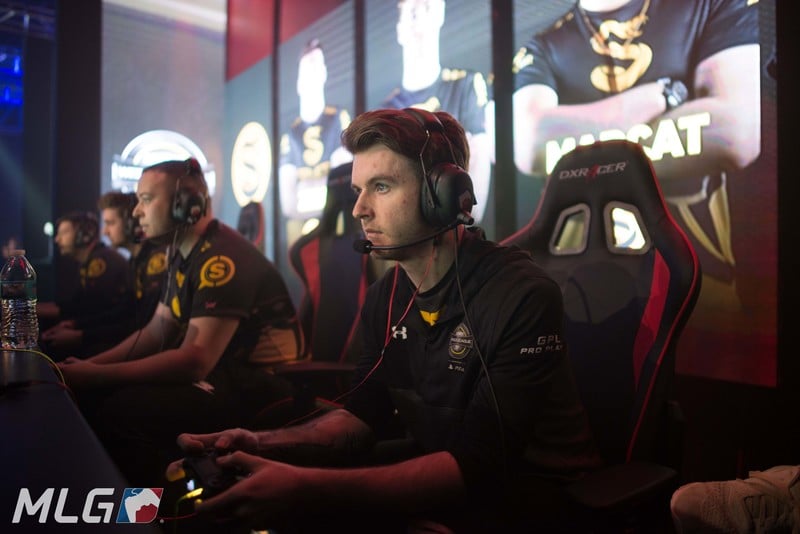 The Call of Duty World League Global Pro League is back. The world’s 16 best Infinite Warfare teams will be pitted against each other over the next few weekends to decide who will be crowned Stage Two champions.

Rankings were determined by a point system that calculated five Dot Esports staff members’ votes. The staff was asked to rank the 16 teams in order from best to worst, with the first place team receiving 16 points per person, while the last team received one point per person. Next to the team’s name is the total number of points earned, as well as the difference in ranking that each squad has experienced since the first rankings list in April.

Before the Call of Duty World Championship begins, we will release another rankings list. For now, here are our current rankings for the top 16 teams in Call of Duty.

Elevate kicks off our list in last place, just as they did in April’s edition. They have been less than impressive all year and it didn’t get better in Stage One. The Europeans finished top 12 and subsequently missed the playoffs. They followed this up with a top 16 performance at the CWL Anaheim Open and a top 12 finish at the much smaller CWL Sheffield Open. If something doesn’t change in Stage Two, we’ll probably see Elevate at No. 16 in our next power rankings too.

Similarly to Elevate, Mindfreak hasn’t been good in international play. Despite being the top dog in the Asia Pacific region, the Australians missed the Stage One playoffs with a top 12 finish. At CWL Anaheim, they were bounced from the tournament with a top 20 placing, the same finish they had at CWL Atlanta earlier in the year. Without sudden improvement, it’s likely that we’ll see Mindfreak near the bottom of Stage Two.

Fnatic’s time in CoD hasn’t been great since the organization rejoined the scene in January. A middle-of-the-road team, Fnatic has failed to finish within the top 12 of any North American open event this year. Fnatic also performed badly in Stage One, forcing them to earn their Stage Two spot in the relegation tournament. Luckily, they were able to retain their coveted CWL spot, but they still couldn’t find much success at the next tournament, the CWL Anaheim Open. There, the Europeans finished top 16 once again. Fnatic hasn’t proven that they can crack into the top 12 on North American soil yet, so expect them to be at the bottom of the next rankings as well.

Ghost Gaming is the only new team in Stage Two of the CWL Global Pro League. The roster came together following Stage One after Lacefield’s Cloud9 team was relegated. The team has played in just three tournaments since forming, so no one’s exactly sure what to expect out of this team. They finished top 12 at CWL Anaheim, but without more major events under their belts, it’s tough to give them an accurate rank.

Red Reserve is a weird team. Despite being relegated after an abysmal 1-5 record in Stage One, Red was able to pick up the pieces and turn things around. The team won the EU 2K tournament on June 11, qualified for Stage Two, finished top eight at CWL Anaheim, and was the runner-up at CWL Sheffield. Is this a sign that they’ve fixed the issues that plagued them in Stage One, or is it just a lucky streak? Either way, Red is a question mark going forward as they could drop drastically or rise suddenly depending on what they do in the next few weeks.

Rise has the potential to be a great team, but everything that they’ve done since CWL Paris proves that they’re just not there yet. Rise took home the CWL Las Vegas title in December, but has failed to do much of anything since. The only bright spot came in Paris, where they finished third. Since then, they haven’t finished in the top four in any online tournament and they haven’t finished in the top eight at any LAN tournament. A top 12 finish in Stage One was enough to qualify for Stage Two, but that might not be good enough for the players on Rise Nation.

A little less than a year ago, EnVyUs was the top team in the world after winning the Call of Duty World Championship. Now, we have them at No. 10, simply because they’ve just been average since March. A top eight placing in Stage One wasn’t awful, but it was average. But then they finished top 24 at Anaheim, and that can’t be overlooked. EnVyUs finished last in their five-team group and then was immediately eliminated by Team Allegiance in bracket play. EnVyUs has to find some momentum in Stage Two because it’s unlikely that they’ll be able to repeat at the Call of Duty World League Championship without some sort of solid play beforehand.

Evil Geniuses finished top eight in Stage One, and subsequently made a roster change to release Jeremy “StuDyy” Astacio and add former CoD world champion Parasite. Parasite has consistently been one of the most skilled players in the world since Black Ops II, and EG hopes that he will be able to boost their lineup into the top four. They were close at CWL Anaheim, where they finished top six. With some more time and no personality clashes, EG should be able to push into the upper echelon before long.

Following a top six Stage One performance, Mike “MRuiz” Ruiz left the team and joined Oxygen Black. Filling his place was former 100 Thieves player Royalty. The Canadian helped the team finish top four in their first MLG 2000 Series tournament together, and then they placed top six at CWL Anaheim. It’s unknown how long it will take E6 to completely mesh with Royalty, but when they do, it should be a lethal lineup.

For some, FaZe Clan might be a little low in these rankings. FaZe was previously the third-best team in Infinite Warfare, and that pretty much can’t be disputed. The team finished third at CWL Las Vegas, CWL Dallas, and in Stage One of the CWL Global Pro League. But with an incredibly disappointing top 16 finish at CWL Anaheim, FaZe pulled the trigger on a roster change. Trading for Gunless was one of the biggest moves in recent history. Gunless has been a top player in IW thus far, taking home the CWL Atlanta MVP award in February to prove it. His contract spat with eUnited led to him benching himself, hoping to force a trade elsewhere. It worked as he was traded to FaZe on June 23. In their first tournament together, FaZe finished top four in the MLG 2K on June 25. This could be the greatest acquisition for FaZe or it could be the start of a downturn for the team.

Following a poor Stage One showing, where they placed outside the top 12, Cloud9 made two big roster moves. With Lacefield and Richard “Ricky” Stacy departing from the team, Priest and Xotic were brought into the fold. The young additions instantly revived C9. After qualifying for Stage Two, C9 went on to place fourth at CWL Anaheim. That finish was the best for the team since December, when they took second at CWL Las Vegas. With the sudden change in the team’s play and attitude, it looks like C9 is back.

Epsilon Esports was at No. 14 in our April rankings, but the Europeans have flourished since acquiring Joshh in March and moved up the most on our list. Despite an initial blunder at Dallas, where they finished top 24, Epsilon collected two online titles and a CWL Birmingham championship prior to Stage One. Epsilon struggled in the GPL, though. Finishing top 12, it looked like they may have been just a good EU team instead of a great international team. Epsilon proved that thought wrong, however, by finishing third in Anaheim. They continued their domination of European open events as well, taking home the CWL Sheffield title last weekend. If Epsilon is able to repeat some of their Anaheim magic, we can expect them to be a major contender in Stage Two.

EUnited exploded onto the scene in Infinite Warfare, taking home the trophy in Atlanta and being the runner-up in Dallas. But the issues with star player Gunless led the team to struggle in both Stage One and beyond. A top six finish in the GPL led Gunless to demand a trade and bench himself until it happened. This prompted the team to have Michael “Swarley” Carter fill in for Gunless at CWL Anaheim, where they finished top 12. On June 23, Gunless was finally traded to FaZe, and in return, eUnited received one of the greatest Call of Duty players in history. Clayster joined the team and vowed to build eUnited into a powerhouse. A top four finish in last weekend’s MLG 2K shows that they can do it, but it might take a little more time for the team to return to the juggernaut they were prior to Stage One.

OpTic looked poised to continue their domination of CoD following a flawless 6-0 record in Stage One group play. With FaZe as their first round opponent in bracket play, many were expecting OpTic to roll over them just as they had been doing for the most part since Advanced Warfare. Despite the odds, FaZe shocked the Green Wall with a 3-1 win and sent OpTic to the losers bracket. Even with the loss, fans expected to see OpTic make a lower bracket run to the finals just as they did at the CWL Atlanta Open. It was going according to plan with sweeps over EnVyUs and Enigma6, but Luminosity came out strong and put an end to OpTic’s run, defeating them 3-1. Things didn’t work out at CWL Anaheim either as OpTic were eliminated by Enigma6 in the losers bracket quarterfinals following another perfect group stage. It will be extremely interesting to see how OpTic looks in Stage Two considering these recent struggles.

After years of being belittled by rivals across the pond for not having a team to stand toe-to-toe with North America’s elite, European fans finally have their squad. When Splyce became the first European team in CoD history to win a major tournament on American soil, the stigma on EU teams being unable to win it all ended. Splyce’s Stage One championship was anything but a fluke. Beating EG, Enigma6, FaZe, and Luminosity was no easy task, and that is why they are the second-best team in the world right now.

Luminosity used to be just good. With top eight finishes all throughout the IW season, LG was undoubtedly a dangerous team to play, but not a real threat to take home titles. That all changed in Stage One of the CWL Global Pro League, though. The team finished second in Group Yellow, only behind one of the best teams at the time, eUnited. In bracket play, LG took out EnVyUs before being sent to the lower bracket by FaZe. In the losers bracket, Luminosity shockingly swept eUnited, stunned OpTic Gaming, and got revenge on FaZe to eliminate the three best teams in the world consecutively. LG would end up placing second in Stage One, but they had finally broken through the ceiling that had been keeping them from becoming an elite team. Following the second-place finish in Stage One, LG took home the organization’s first title at CWL Anaheim. The next weekend, they continued their winning ways and captured an online title by reverse sweeping Cloud9 in the finals of the MLG 2K tournament. With those two big wins and their play in Stage One, it’s hard to argue with Luminosity being at the top of Call of Duty.