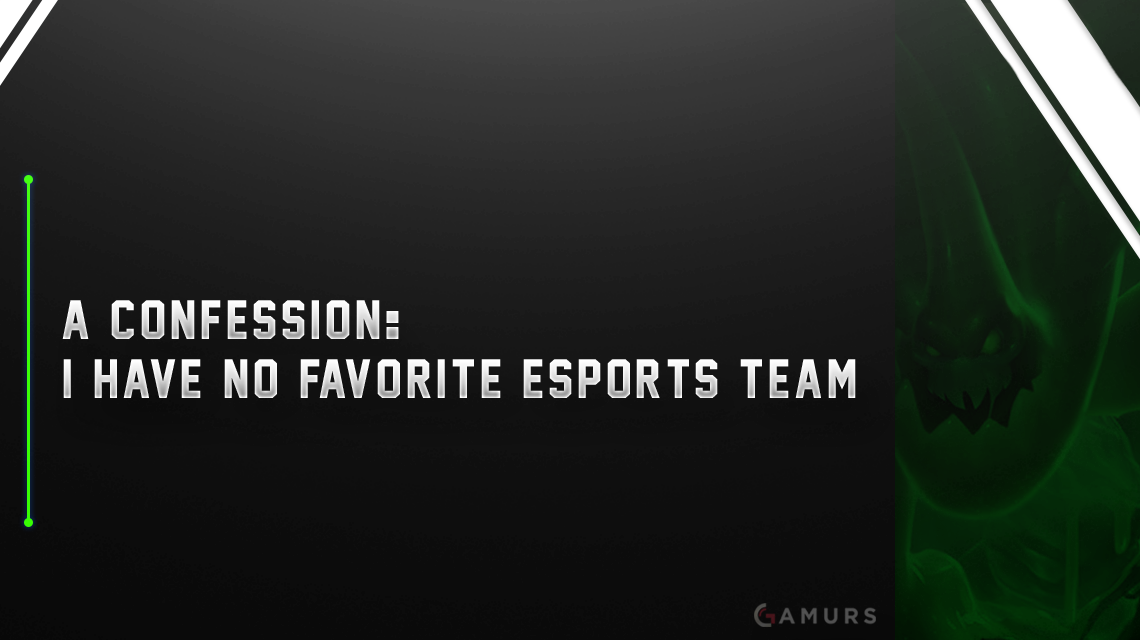 As odd as it seems, I do not have a favorite Call of Duty team. In fact, I don’t have a favorite esports organization in general, I just follow the different games and choose a team to root for on a match-by-match basis. And I have a strong feeling that I am not alone.

Lacking a favorite team is something new to me. I grew up somewhat near the city of Philadelphia, a city known for its rowdy, diehard sports fans, and being that my dad grew up a Philadelphia fan, I automatically became one as well. There was no reason not to: Philadelphia had professional teams in football, baseball, hockey, basketball, and more recently, soccer. Rooting for Philadelphia not only made sense because they were the home team – my home team- but almost everyone else in the area also rooted for them, which makes watching and rooting for Philadelphia teams a lot more fun. Of course, if you are a sports fan this logic is nothing new to you.

From my own experience, there are two types of sports fans: the ones who root for the home team and the ones who root for their rivals instead. When it comes to Philadelphia, a lot of people in the area root for the Dallas Cowboys or the New York Giants in spite of their Philadelphia-loving friends. Sometimes the rivalry can get nasty but most of the time it is just good-hearted fun. For example, several of my uncles became Dallas Cowboys fans due to their Super Bowl wins in the 70’s and early 90’s (at least, that’s what I assume). That’s pretty typical in both sports and esports – people love to root for the team that is winning. I guess I am just not one of those people.

In Call of Duty esports, OpTic Gaming is that team. They are currently in the midst of what is clearly a dynasty: their roster features four of the best players in the game and they have won more events than they have lost over the past year and a half. To say that OpTic’s popularity comes purely from their tournament wins would be unfair, but it certainly helps. The organization has brought a lot of new fans to the scene due to their YouTube popularity and no one can fault them for that. It just so happens that they are also the best team in the game, making it so a very large percentage of Call of Duty esports fans root for OpTic above all other teams. In several polls (a recent one couldn’t be found), nearly 40% of all Call of Duty esports fans chose OpTic Gaming as their favorite team. The second most-liked team on the list was favored by only 11% of participants. Clearly, there are a variety of reasons why someone might root for a particular team, but the disparity in Call of Duty esports is undeniable and something that I find a little unfair.

Instead of rooting for the best team in the game, I would rather root for the underdog. That’s how I’ve always been when the home team isn’t in the game – it’s always a better story to see the underdog come away victorious than to see the favorite to win yet again. It’s not that I have anything against OpTic Gaming. In fact, I can see the appeal. The players are all likable, fans feel like they actually know them due to their social media presence, and they are dominant. But even though there are a lot of underdogs in Call of Duty, I still don’t have a favorite team. No one else has appealed to me to the point where I can become a diehard fan.

Ok, confession number two: Team Orbit should be my favorite team. I’ve worked with the organization for nearly two years now and was associated with them even before they became internationally recognized. When Team Orbit had a North American Call of Duty team in Advanced Warfare, and they were pretty good, I certainly was a fan. Having a team to root for encouraged me to watch as many of their matches as possible, and I definitely got excited. Unfortunately, the team eventually disbanded. Team Orbit has had professional teams in a variety of esports and actually currently still have a professional Call of Duty team, but they are located in Australia. Yes, I root for them, but I barely get the chance to actually watch them. When they are playing, I am sleeping. However, Team Orbit will be attending Call of Duty XP as the second ranked team from Australia/New Zealand and of course I will root for them, but on a day-to-day basis when I am watching North American Call of Duty, I still don’t have a favorite team. I wish I did.

A lot of people have talked about how in esports, Call of Duty especially, it is sometimes easier to root for a player than a team. Team sizes are small and players typically move around a lot. From one event to another, a team’s roster can entirely change, so what are fans rooting for at that point? An easy example is that of SK Gaming’s Counter-Strike: Global Offensive roster. Previously known as Luminosity Gaming, the players all signed with SK Gaming, replacing the previous roster under the organization. They are currently the best team in the game and fans are likely rooting for them, the players, and not necessarily the organization they are playing under. KiLLa is a great example in Call of Duty. He won the 2013 Call of Duty Championship with Fariko Impact and because of his funny outbursts at events afterward, KiLLa memes like “WHOOOO!” and nicknames like “Bald Eagle” came out of it. He has not been nearly as successful in his Call of Duty career ever since, but he certainly has a loyal fanbase that follows him wherever he goes.

People like champions and they also like personalities. Compared to sports, esports are very personal and fans often get to see their favorite players every single day and sometimes even talk to them – and get responses – on Twitter and Twitch. When that players changes teams, the fans come with him/her. Fortunately, teams have been more stable in the current Call of Duty game cycle, making it easier to be a fan of both players and their teams at once. The Call of Duty World League is one reason for this, as only a few roster changes are permitted per season and now, with several months to go before CoD XP, several teams are locked in for the long haul. Of course, every other team is desperately trying to put together a god-squad that can possibly sneak into the top eight.

For me, following a particular player just doesn’t cut it. Sure, there are plenty of players that I like, but this has never translated into following their team closely.

As nice as it would be to have a favorite team to follow, I also see that it isn’t entirely necessary. I watch competitive Call of Duty for all of the storylines, not just for one team. I am excited to watch events to see a “dark horse” win and for the close rivalries. And I am always ashamed when view numbers flair up for one team and immediately drop down when they are done playing.

As a fan of competitive Call of Duty and not one team in particular, here is the advice I offer to other fans: expand your horizons. You don’t owe OpTic Gaming anything. There is nothing wrong with rooting for them, but when their match is over, stick around for the next set of teams playing. There are plenty of teams and players, all with unique personalities that you might find interesting, to follow. You will become more involved in the community and learn much more about competitive Call of Duty this way, and the rest of the community will greatly appreciate it. So, in other words, not having a favorite team is perfectly acceptable.

Josh Billy can be contacted by email at [email protected] or on Twitter @Orbit_CH3MISTRY.