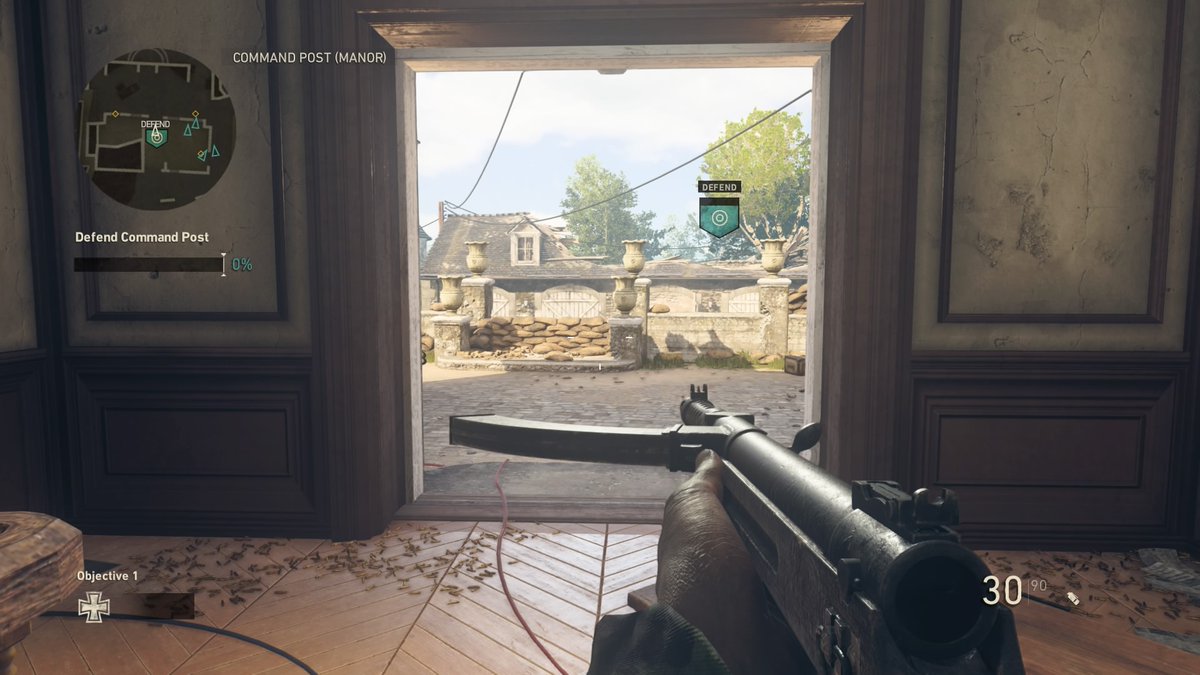 War—one of the newest game modes introduced in Call of Duty: WWII—has been a great success so far in the private multiplayer beta.

Even though Operation Breakout is currently the only War mission available in the beta, Call of Duty fans truly are enjoying the new team-oriented game mode.

Operation Breakout features a battle between the Axis and Allied forces. The game consists of two rounds, and each team plays both offense and defense. The Allies, or offensive squad, need to complete four objectives to win the round, while the Axis, or the defensive team, try to prevent the Allies from accomplishing these tasks.

The Allies get four minutes to complete each objective. If the Allies win both rounds, whichever squad has the fastest time wins the game. But the Axis can win the round by preventing the Allies from completing any of the four objectives.

For the most part, defense is a little more difficult than offense on Operation Breakout. Each of the four objectives listed below require different weaponry and equipment in order to hold off the Allies for as long as possible.

Here are some tips and strategies that you can use when playing as the Axis forces on Operation Breakout.

The first defensive objective for the Axis forces on Operation Breakout is to prevent the Allies from taking control of the command post.

Immediately upon entering the command post, the defensive team should take note of the buildable objects in this house—two walls and a machine gun turret. Building these fortifications definitely make it easier for the defensive team to hold off the Allies.

Submachine guns and shotguns are the easiest weapons when holding control of the actual building—but SMGs or assault rifles can be used on the perimeter of the command post to prevent the Allies from even reaching the entrance points.

If the Allies breach into the command post, one tip that can help you regain control is to not build the wall in the back right corner of the building. If that wall is built, there are only two entrance points in the back of the command post. So if the offensive team is already in the command post, they can simply pre-aim those two entrance points and keep the defense out of the building. If that one wall isn’t built, however, the defensive team have another way to get back into the command post—instead of building the wall and trapping themselves outside. It’s a risky strategy because you could get flanked, but leaving this one wall unbuilt could help alleviate some pressure if the offensive team is being very aggressive.

If the Allies succeed in taking control of the command post, the next defensive objective on Operation Breakout is to prevent them from building the bridge. This is one of the most fun rounds for the defensive side of this map, mainly because it’s when snipers are most effective.

On offense, players will utilize smokes to try to cover themselves while building this bridge. On defense, however, make sure to use frag grenades and throw them at the bridge—no amount of smoke grenades can protect someone from a frag.

The two turrets are also extremely important for the Axis’ success on this map—just make sure that you always have one man on each turret because these weapons pack a mean punch. If you have snipers protecting your turret operators, it becomes even easier to halt construction of the bridge.

If you fail to prevent the construction of the bridge, the next defensive objective on this map is to defend the ammo dump. This can get tricky for the Axis forces—the ammo dump is an extremely small area surrounded by six buildable walls.

Thus, we recommend only building the walls at the back of the ammo dump halfway. This will provide a head-glitch or cover for the defense, and will allow the Axis to regain control of the ammo dump more easily if the Allies successfully plant the bomb.

Similar to the command post, SMGs and shotguns are most effective inside of the ammo dump, while SMGs and assault rifles can be used to lock down the perimeter of the bomb site.

If the Allies succeed in completing all three of the previous tasks, the final defensive objective for Operation Breakout is to stop the tank escort. The offensive team will try to advance the tank’s position by being near it, but the defensive squad can also push the tank back by standing in its vicinity.

This is a very hectic and chaotic objective, especially as the tank gets closer to its final destination—the church. There are three buildable turrets near the church that are absolutely essential to the Axis’ success in this objective. A wide variety of weaponry and tactical equipment will also be useful in keeping the offensive team off balance.

The Allies will most likely have one person operating the tank’s turret. It’s essential to kill this player as soon as he gets inside the tank, because he can do a lot of damage if he’s left untouched.

A combination of smoke grenades and SMGs is also a quirky strategy that can be used to catch the offensive players around the tank off guard. Throw your smoke and run right up to the tank, then spray your SMG through the smoke. Hopefully you’ll land a few shots on the enemies who can’t see you, and you can push the tank out of the church area for a few seconds.

Operation Breakout has already shown the Call of Duty community how exciting the War game mode can be. It’ll be interesting to see the rest of the War missions that become available when the game launches on Nov. 3—but for now, test out these defensive strategies and see if you can win a round as the Axis.