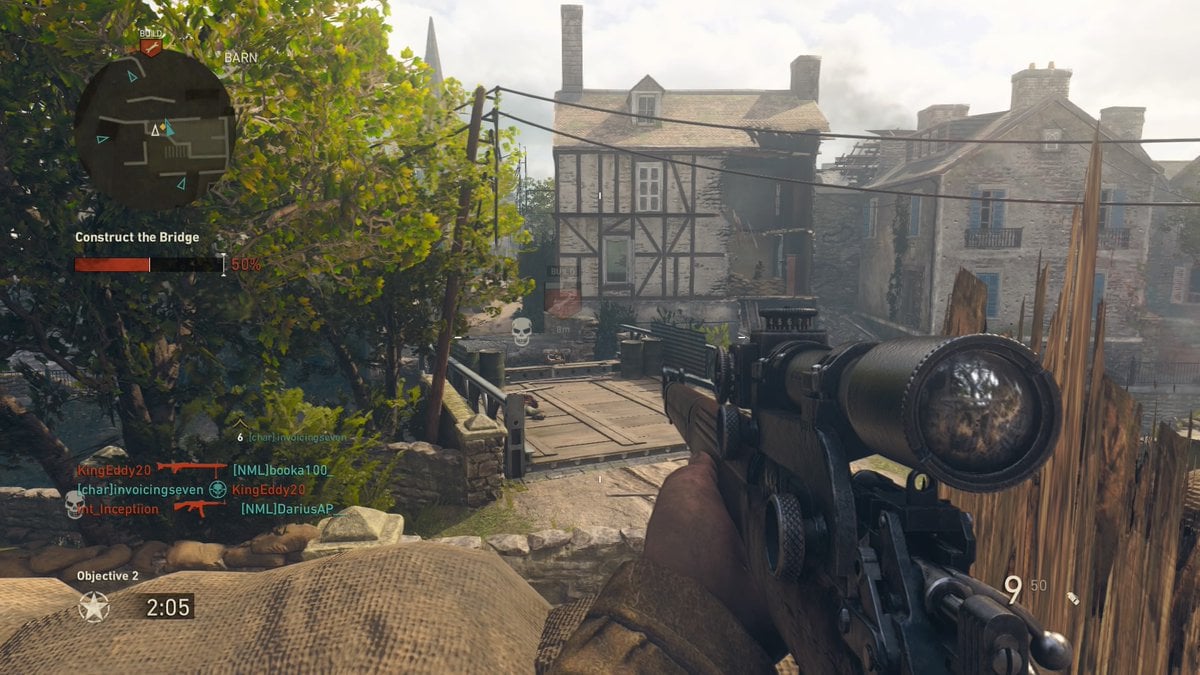 War is one of the newest game modes introduced in Call of Duty: WWII—and Operation Breakout is the only mission currently available in the private multiplayer beta.

Operation Breakout is an extremely fun and action-packed game mode that features a battle between the Axis and Allied forces. It’s a very team-oriented game—you can play on your own, but we recommend playing War with a set squad of friends and teammates in order to execute effective communication and tactics.

Related: Here’s everything that will be available in the Call of Duty: WWII beta

The game consists of two rounds, with each team getting a chance to play offense and defense. The Allies, or offensive team, have four objectives that they need to complete in order to win the round, while the Axis, or the defensive squad, try to prevent the Allies from finishing all of these tasks.

The Allies get four minutes to complete each objective. These rounds are timed, so if the Allies win both rounds, whichever squad has the fastest time wins the game.

Here is a breakdown of each objective in Operation Breakout—as well as some tips and strategies that can help you send the Axis forces packing.

The first offensive task in Operation Breakout is to capture the command post. The Allies have four minutes to break into and take control of this tiny building.

There are only a few entrance points, which means this round primarily focuses on close-quarters engagements. Shotguns and submachine guns are definitely the most productive weapons in terms of breaking into the command post and fighting from inside.

A mix of grenades—such as frag, smoke, and concussion grenades—is also vital to taking control of this stronghold. If you’re playing with friends, make sure to communicate what grenades you’re using so you can switch them up and keep your opponents off balance.

Once you’re inside the command post, keep using close-quarters weapons like shotguns and SMGs in order to take control of the base and move on to the second objective.

If your team successfully captures the command post, then you need to advance on the map to construct a bridge. This is a very tricky objective since there are several long lines of sight that both teams can use to eliminate their enemies.

Sniper rifles are definitely recommended to provide cover fire for your teammates building the bridge. Smoke grenades are also vital to successfully completing this objective quickly.

A sniper can throw a good smoke grenade to cover the bridge, and then pick off any enemies on the Axis turrets who are trying to shoot your teammates through the smoke. Any long-range weapons are useful for this objective, but if you have a good sniper shot, you instantly become a more valuable asset to your team.

If you succeed in building the bridge, you now move on to the third objective, which is to destroy your opponent’s ammunition supply. A wide variety of weapons can be used to complete this task, but we’ve found the most success using assault rifles outside of the ammo dump, and shotguns or SMGs once you’re inside the bomb site.

Frag grenades are great for this task, because you can just continually clear out the area if your opponents are flooding the bomb site. Once you plant the bomb, shotguns and SMGs are definitely recommended, since the entire enemy team will vigorously sprint towards the bomb to defuse it. Assault rifles can continue to cover the perimeter of the bomb site, but we don’t recommend using them inside the close-quarters bomb site.

This is a very chaotic objective, but again, if you have a set team with various weapons and grenades, you can blow up the ammo dump relatively quickly.

The final objective—and possibly the most frenetic part of Operation Breakout—is to escort your tank to the opponent’s church. You’ll need to stand by the tank so it can advance, but if your opponents get near the tank, they can move it backwards and halt your progress.

Pretty much anything goes for this final objective—sniper rifles, assault rifles, and SMGs can all be useful for both teams during this part of Operation Breakout.

Once you get closer to the church, however, Operation Breakout turns into utter chaos. It essentially becomes a six-on-six fight in a very small square-like location. The Axis defenders will have turrets, so it’s important to eliminate those players with long-range weapons like snipers or assault rifles. If you’re the player on your team standing next to the tank to escort it, you might want to use an SMG or shotgun, since a lot of enemies will be running right at you.

Operation Breakout is a lot of fun, and definitely a welcome addition to the Call of Duty franchise. Try out some of these strategies—or create your own—to see what works best for you and how you can most quickly complete all four objectives to win this map.