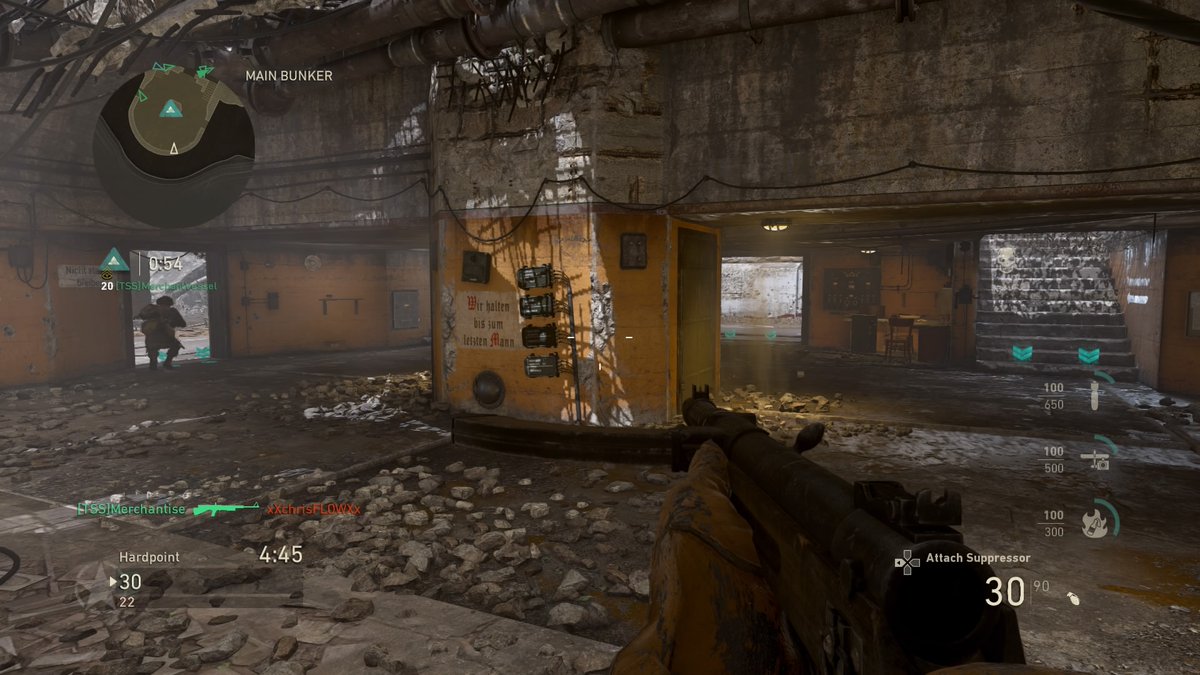 Hardpoint has been a staple in competitive Call of Duty since the game mode was first introduced to the franchise in 2012—and it doesn’t seem like that will change at all in WWII.

The Call of Duty: WWII private multiplayer beta is now live on PlayStation 4, and players are already flocking to this game mode, as they try to learn how Hardpoint will be played in the upcoming season.

In Hardpoint, two teams compete for control of a selected area of the map, known as the Hardpoint. Each Hardpoint lasts for 60 seconds until rotating to another location, and a team gets one point per second of uncontested time in the Hardpoint. The team that reaches 250 points first wins.

A team can also win if the five-minute game clock expires—but there’s a catch. The game clock only decreases when someone isn’t in the Hardpoint, or if the location is being contested by both teams. This makes Hardpoint one of the most intense and action-packed game modes currently in Call of Duty.

Although there are only three Hardpoint maps currently in the WWII beta, each of them provides players with a nostalgic feeling, since this is the first time the game mode has been played in a boots-on-the-ground Call of Duty title since Black Ops II. And so far, it seems like most players are enjoying the game mode in WWII.

Here is a quick rundown of each of the three Hardpoint maps in the WWII beta, including the rotations of the Hardpoint locations on each map. The names used for each individual Hardpoint are those provided in-game in the top left corner of your screen near the mini-map.

Pointe du Hoc is a very small map located on a cliff in Normandy. The narrow passageways and trenches really give this map a true World War II feel. There are a lot of close-quarter engagements in these trenches and bunkers, which makes this the perfect map for submachine guns and shotguns.

There are five Hardpoint locations on this map. The Hardpoint rotation for Pointe du Hoc is as follows.

This map is set in one of the most heavily-protected locations in Europe during World War II. Gibraltar offers many different lines of sight, which allows players to find success on this map with a variety of weapons. Use an assault rifle or sniper rifle to cover your teammates from a high vantage point, or bring a shotgun or SMG into the Hardpoint to earn some time for your squad.

Unlike Pointe du Hoc, there are only four Hardpoint locations on this map. Here is the Hardpoint rotation for Gibraltar.

Known as a location of the Battle of the Bulge, Ardennes Forest is a small, snowy map with many close-quarters buildings or pathways. Teams will fight for control of many important chokepoints, including the narrow trails that connect the different sections of the map. At first glance, it seems like SMGs will dominate this map—but in certain situations, an assault rifle or sniper rifle can definitely be beneficial.

Just like Gibraltar, there are four Hardpoint locations on this map. Here is the Hardpoint rotation for Ardennes Forest.

There are four Hardpoint locations on this map. Here is the Hardpoint rotation for Aachen.

If any multiplayer maps are added to the Call of Duty: WWII private multiplayer beta, this list will be updated accordingly.