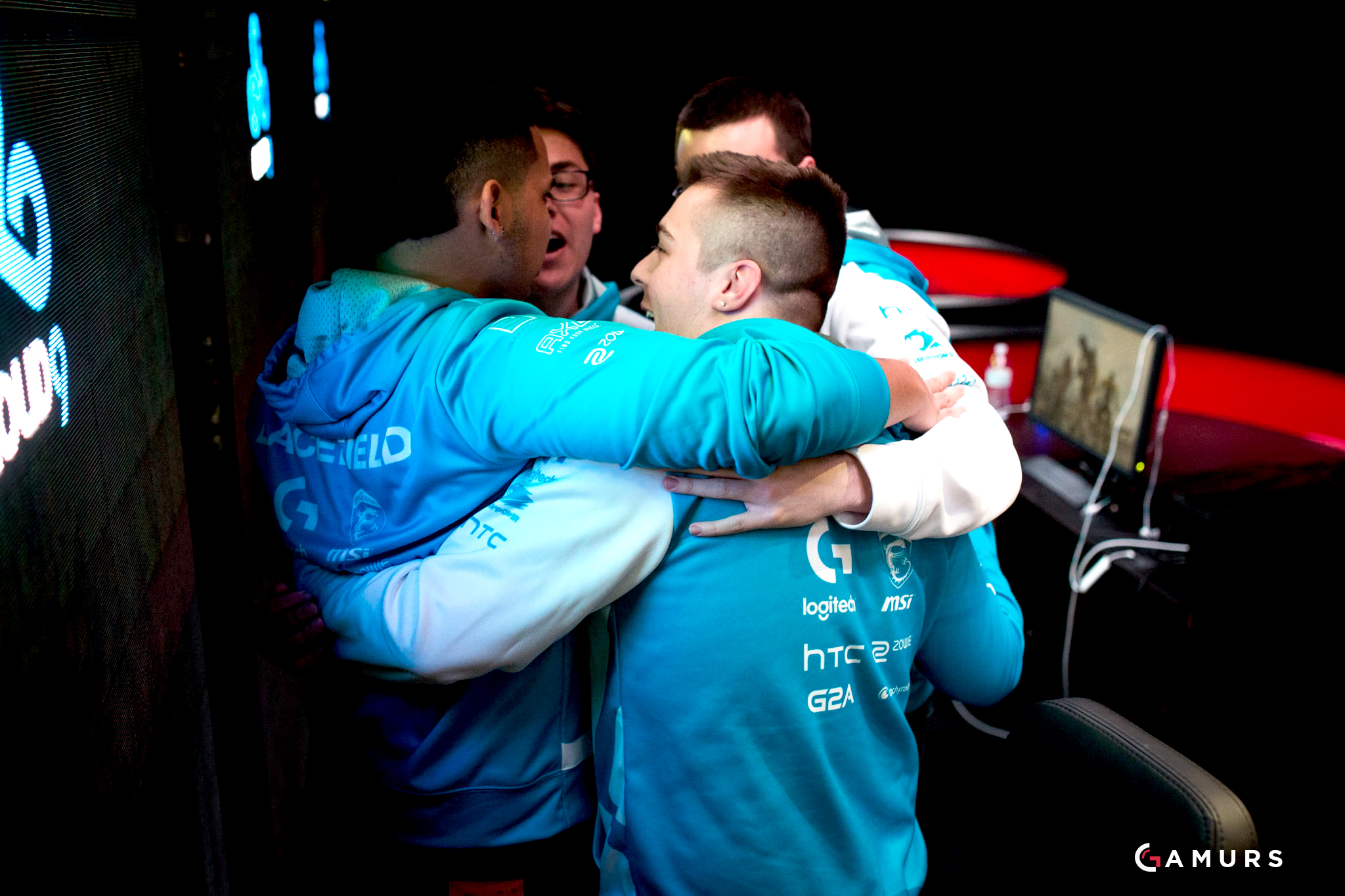 During the World War II era in history, the term “superpower” was coined to describe some of the most powerful and influential regions across the globe. However, these so called superpowers did not earn that title overnight; there were numerous moments and events that led to their coronation.

Although it might seem unreasonable to compare a Call of Duty team to some of the strongest countries in history, I think the second aspect of that metaphor is the most important component. Just as “Rome wasn’t built in one day,” a Call of Duty team cannot effortlessly climb to the top of the rankings.

This is the story of Cloud9’s journey in Call of Duty. They did not instantaneously build a championship-caliber team, but after a period of uncertainty and growing pains, Cloud9 now has one of the best teams in Call of Duty®: Infinite Warfare.

Cloud9 has only been involved in the Call of Duty scene for a little over a year now. Back at the start of December 2015, roughly one month after Call of Duty®: Black Ops III was released, Cloud9 announced their first Call of Duty roster, consisting of Joey “MerK” DeLuca, Matthew “Burns” Potthoff, Steve “Mochila” Canle and Justin “SiLLY” Fargo-Palmer. However, after failing to qualify for the inaugural season of the Call of Duty World League, this iteration of Cloud9 disbanded.

A little over a month later, in January 2016, Cloud9 picked up an entirely new roster, consisting of Adam “KiLLa” Sloss, Jonathan “SinfuL” Baez, Lamar “Accuracy” Abedi and Cameron “CaLiFa” Joyner, to compete at UMG South Carolina. Although this team showed some potential online, they failed to perform in Myrtle Beach, placing top-24.

This roster was thus released following a disappointing performance in South Carolina. While the professional teams were participating in the first season of the CWL, Cloud9 was focused on trying to earn a spot in the second season. To do this, Cloud9 decided to double their chances by sponsoring two teams for the NA CWL Stage One Online Relegation Qualifier.

Cloud9 was the number one seed entering the relegation tournament, which seeded them to play against the professional team with the worst record in Stage One, which was Counter Logic Gaming. On the other hand, Cloud9 Eclipse was the third seed, which placed them against Dream Team, the second best relegated team.

Cloud9 Eclipse was first to play against Dream Team, and at the time, it was one of the best series of Black Ops III action. Each game was closely contested, and in this back-and-forth series, Dream Team was able to keep their spot in the pro league after a nail-biting game seven, round 11 to secure the 4-3 series win.

With Cloud9 Eclipse eliminated from pro league contention, the fate of Cloud9’s Call of Duty future rested on the shoulders of the “main” Cloud9 team; and they delivered. In the most lopsided series of the relegation tournament, Cloud9 defeated CLG 4-1 to earn their spot in the second season of the CWL.

Cloud9 struggled slightly at the start of Stage Two and felt that it was necessary to make a roster change, replacing Mochila with Assault. This newly-remodeled Cloud9 roster earned a top-eight placing at MLG Anaheim 2016 and ended the second season of the CWL in fifth place with a 13-9 record.

In the Stage Two Playoffs, C9 faced off against the fourth seed, Rise Nation, who swept them 4-0 to eliminate them with a top-eight finish. This resulted in yet another roster change, as SiLLY and Swarley replaced Happy and Llama. Together, this new roster earned another top-eight finish, this time in the Sunshine State at MLG Orlando 2016.

While other organizations might have been satisfied with top-eight placings, Cloud9 was not, resulting in yet another series of roster changes. However, this time, Cloud9 made all the right choices and picked up the players you see donning the baby blue and white in 2017. C9 kept Assault on the roster, but released everyone else in order to pick up Patrick “ACHES” Price, Richard “Ricky” Stacy and Andres “Lacefield” Lacefield.

Although this team wasn’t together for long at the time, ACHES and company fought through the online qualifier in order to secure their spot in the 2016 Call of Duty World League Championship.

In the biggest event in Call of Duty history, ACHES led Cloud9 to a second place finish in Group G with a record of 2-1, just behind Team EnVyUs, the eventual tournament champions. In the winners bracket, C9 defeated compLexity Gaming 3-2 before falling 3-0 against Elevate. In the losers bracket, Cloud9 swept HyperGames and then ACHES broke the Green Wall once again by defeating OpTic Gaming 3-2 in one of the best series of Black Ops III.

However, C9 unfortunately was eliminated in the following round, losing 3-1 against FAB Games, to end their tournament run with a top-six placing and $70,000 as a team. At the time, this was definitely Cloud9’s best placing in Call of Duty, and it came at the right time as Black Ops III was coming to an end and Infinite Warfare was just on the horizon.

Obviously, thanks to their great showing in Los Angeles, Cloud9 kept this four-man roster heading into the Infinite Warfare season; and that has proven to be another excellent decision by this organization.

At the first Infinite Warfare event, MLG Las Vegas 2016, Cloud9 proved a lot of doubters wrong and showed everyone the strength of their roster. Despite all of their series going to a decisive game five, Cloud9 finished in first place in Group C with a record of 2-1.

Remarkably, Cloud9 was up 2-0 in all three pool play series, but, as ACHES told GAMURS at Vegas, Uplink was their biggest weakness, allowing their opponents to completely shift the momentum in each series. Nevertheless, aside from their first series of the event against Team Kaliber, Cloud9 showed the ability to clutch up in Search and Destroy, which was a huge reason why they were able to advance out of pool play.

In the championship winners bracket, the storyline remained the same; Cloud9’s matches continued to go the distance, but they still came away with the win in game five. C9 took down Elevate, followed by Team Allegiance, both 3-2.

In the grand finals rematch against Rise, Cloud9 was on the other side of this storyline. Rise went up 2-0, but C9 refused to quit, winning the next two games to force a decisive game five. However, for only the second time all tournament, Cloud9 was unsuccessful in game five, as Rise defeated C9 3-2 in order to be crowned the MLG Vegas champions.

The Birth of an Empire?

Despite losing in the grand finals, Cloud9 still finished in second, earning $24,000 and, arguably even more important, 6,000 pro points per player.

But Cloud9 did not stop there. Led by ACHES, who currently has over 10,000 pro points individually, C9 has been grinding the pro point ladder on GameBattles more than any other team. Their hard work and dedication to improving is clearly paying off, and one could only imagine that all of their time put into practicing this game will pay off at the next event in Atlanta.

Regardless, just as “Rome wasn’t built in one day,” the Cloud9 Call of Duty team did not become successful overnight. After several personnel changes, C9 finally has a championship-caliber roster. Their mix of veteran leadership from ACHES and Ricky, combined with the raw slaying ability of Assault and Lacefield, truly makes this the best roster Cloud9 has ever fielded.

Even outside of the numbers, the intangibles are there for this roster as well. Ricky unselfishly does the objective work while his teammates slay around him. They play extremely well as a unit, which shows in C9’s ability to win Search and Destroy games. On top of that, C9’s propensity to clutch up and win game fives is truly remarkable. Everyone says that “Search and Destroy” wins championships, and if Cloud9 is able to improve their Uplink while still dominating in Search and Destroy, I wouldn’t be shocked to see some championships in their future.

When most people think about the “superpowers” in Call of Duty, they think about OpTic Gaming, Team EnVyUs and FaZe Clan; and rightfully so. However, if anything, Cloud9 has certainly put in the time and effort to at least start building their resume towards becoming a part of the conversation, thanks to their recent performances in Infinite Warfare.

Do you think that Cloud9 can be one of the top Call of Duty teams in 2017? Let us know by commenting below or tweeting us @GAMURScom.