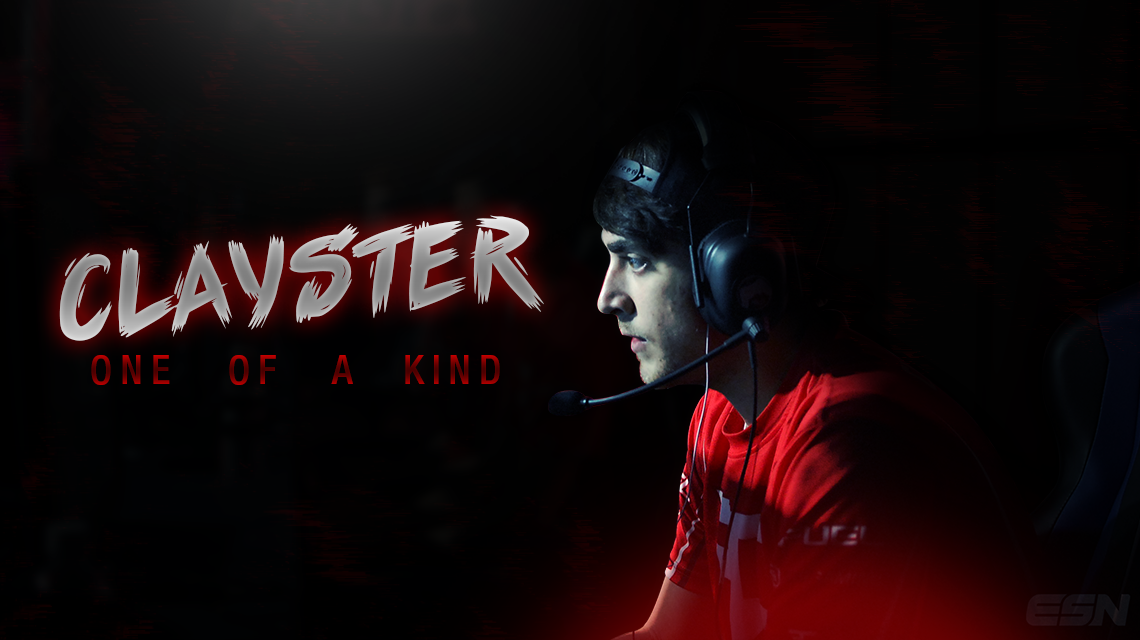 Throughout every game cycle, there is a player who stands out from the rest. A player who, though he isn’t the absolute best at every tournament, is a consistent top-three player. For Call of Duty?: Advanced Warfare , there was only one player to choose: James “ Clayster ” Eubanks.

Clayster absolutely is the most consistent player and Most Valuable Player of Advanced Warfare. Maybe he wasn’t at the top of the leaderboard all the time, but he stayed consistently in the upper echelon and showed up when it mattered most. He did; however, have a bit of a shaky start. After Call of Duty?: Ghosts ended, and Clayster was cut from the renowned OpTic Gaming team, many fans wondered how he would bounce back. Well, he actually didn’t right off the bat.

With multiple offers from professional-caliber teams, Clayster was a highly sought after prospect as Advanced Warfare started up. Eventually, he decided to play for Team EnVy .

The first LAN event of Advanced Warfare, MLG Columbus 2014, didn’t exactly go well for Clayster and the EnVy squad, as they ended up with a top-six placing after being 3-0’d by OpTic Gaming and Team Kaliber . Personally, Clayster had a negative K/D ratio overall and struggled to do any objective work.

Next up was UMG Orlando 2015. Here, Clayster had a pretty solid event individually, but EnVy fell short once again and placed top-12. Both the team, and Clayster, knew a change was needed. This is when Clayster’s season took a turn in the right direction. Clayster and Jordan “ JKap ” Kaplan were traded from EnVy to Denial eSports for Tommy “ ZooMaa ” Paparratto and Renato “ Saints ” Forza. In the MLG Pro League Season 1 online regular season and LAN playoffs, Denial finished in second-place behind only OpTic Gaming.

Along with playing the hype role that Clayster has become famous for, he was also putting up impressive stats. Between the regular season and the playoffs, Clayster averaged a top-10 K/D ratio, as well as a top-seven slayer rating. This Denial roster meshed well, and Clayster fit right in.

Thus, the beginning of an era. The Call of Duty Championship 2015 North American Regional Finals saw Clayster go up against his former team, OpTic Gaming, once again. Though OpTic still came out on top, and Denial placed second in the event, Clayster had his best showing of Advanced Warfare. With an overall K/D ratio of 1.33, top-two in the tournament, and a kills-per-map average of 33.6, top-three in the tournament, Clayster showed his true dominance. But he wasn’t going to stop there. After all, this was just a warm-up for the coveted Call of Duty Championship 2015.

At CoD Champs, Clayster ran the tournament from start to finish. Denial dropped one game in group play, and were forced to face OpTic Gaming, winners of the last three events, four if you include Season 1 Online play. Everyone thought this matchup was ridiculous to have in the first round of bracket play. The two best teams in the tournament, set to duke it out immediately. As OpTic seemed to be an unbeatable juggernaut at the time, the audience was ready to watch Denial have to make a run in the Loser’s Bracket, but the players had a different plan.

Dominating the series from start to finish, the Denial squad took OpTic down, 3-1. From there, only one team really stood between them and a championship: Team Revenge. Everyone’s favorite team became this incredible Cinderella story of a no-name team taking down the best of the best at the most important tournament of the year. Team Revenge was a team that no one had heard of, yet they became the biggest threat to Denial and Clayster. However, in the end, Denial dispatched Team Revenge 3-2 both times they faced them, and won the tournament.

Clayster ended the event with a 1.31 K/D ratio and an average of 34.5 kills per map, both the best in the tournament, and was named MVP of CoD Champs. He showed up during the most important tournament of the cycle, and brought his gun-skills and his hype, but he wasn’t done yet.

Although Denial’s performances as a team declined after CoD Champs, Clayster’s individual performances did not suffer. During his final three events with Denial, (ESWC Zénith 2015, Gfinity Spring Masters I and MLG Pro League Season 2 Playoffs) Clayster averaged a 1.27 K/D ratio and 32.99 kills per map. During this time period, even though Denial never won another event, Clayster was the best slayer at every tournament.

Once again, both the team and Clayster decided that a change was needed, and he and Dillon “ Attach ” Price made the move over to FaZe Clan , where they joined Ian “ Enable ” Wy att and ZooMaa. OpTic returned to dominance after their slip at CoD Champs, but this new FaZe squad, captained by Clayster, was about to give them a run for their money.

They entered their first event together as a team, UMG Dallas 2015, with no LAN practice and not a whole lot of online practice, yet hopes were still high. Exiting Pool Play with a 4-0 record and a 12-1 map count, the squad looked nearly unbeatable. This was only further assured when they made it out of the Winner’s Bracket and only lost one map.

Then, the Grand Finals that everyone was waiting for: OpTic vs FaZe. Could someone finally knock OpTic off of their pedestal? Could any team beat the almighty OpTic Gaming in a Grand Final? FaZe answered both of those questions with a resounding yes, defeating OpTic 3-0 and winning the tournament.

Now we go back to what was said earlier about Clayster being the most consistent player, not necessarily always the best. At UMG Dallas, he had a top-nine K/D ratio and a top-seven kills per map average. Both of these rankings were slightly below his average, but that didn’t matter. He played his role, got the kills he needed to get and of course, provided the hype. There was only so much he could do with ZooMaa dropping 34.33 kills per map and holding a 1.13 K/D ratio.

Clayster’s role with FaZe was smaller than his role with Denial, but that took some pressure off him and allowed him to really take on other roles and play the game in a way that he previously couldn’t.

Of course, since UMG Dallas, FaZe has won the Gfinity Summer Championship, placed top-eight at UMG D.C. and made a legendary, record-breaking run to win it all at the MLG Pro League Season 3 Playoffs. But this article isn’t about FaZe, it’s about Clayster.

Let’s take a look at some numbers. In his time so far with Denial and FaZe, Clayster has averaged approximately a top-five K/D ratio and kills per map average at every LAN event he has attended. His best K/D, 1.33, occurred three times during three of the biggest tournaments of the year: NA Regional Finals, ESWC and Gfinity Spring Masters I. His second-best K/D, 1.31, was at CoD Champs. Bottom line from those stats: Clayster shows up when it matters the most.

Do you agree that Clayster is the most consistent competitive player in Advanced Warfare? Let us know. Follow @eSportsNation for up-to-date coverage and content within CoD eSports.