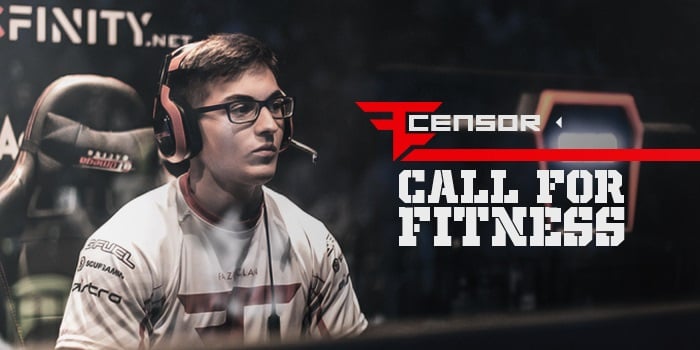 Since joining FaZe, Doug “Censor” Martin has drastically increased his social media following and has stepped up as an inspiration to fans to live a healthy lifestyle and live up to their full potential.

The 20 year old captain of FaZe Competitive has made quite the image for himself in the Call of Duty eSports community as he began to encourage his followers to get in shape and be healthy. Recently, he has uploaded several fitness videos on his [YouTube channel]( https://www.youtube.com/user/CENSAT1ON), these include basic “how to” videos for people just starting to work out.

He began working out when he was 17 years old and since then, he has made it part of his daily routine. Since the beginning of the CoD Ghosts season, there has been a noticeable difference in Censor’s physical appearance. Through years of hard work and dedication, he has gotten ripped and it hasn’t gone unnoticed by members of the community.

The process of building muscle is not one for the impatient, as it takes serious time to transform your body into what Censor has accomplished.

“It’s not as simple as going from skinny, point A, to built, point B,” said Censor. “It all comes down to if you want it. If you do, you’ll put in the time. It’s consistency, sticking to the routine, eating the right foods, drinking enough water, etc.”

Working Out and Gaming

While working out and getting in shape may not sound like the most important thing to do when looking to improve gaming skills, it can actually play a significant role in how you tackle the game mentally.

One of the most prolific benefits to exercising is reducing your overall stress level. Working out relaxes the mind, improve self-confidence, reduces anxiety, improves appetite, and drastically increases your [energy level](http://www.acefitness.org/acefit/fitness-fact-article/51/exercise-can-help-control-stress/).

According to the American Psychological Association, working out causes an increase in norepinephrine, a chemical in the brain that can moderate and control stress levels. In addition to the chemical aspect, psychologists believe that exercise directly enhances your body’s reaction to stress and in turn, prevents anxiety from occurring in the first place.

Believe it or not, professional gaming can take quite the toll on you mentally. Sitting at a desk for 10 hours a day playing a demanding game like Call of Duty can cause gamers to live with a constant high level of stress. Working out is actually the perfect answer to reducing that stress because the effects of exercise train the body to deal with it and even out the chemicals in the brain.

“Ever heard of the saying ‘healthy body healthy mind?’ Working out is a stress reliever. Once you finish, your mind feels free. If you get on and game after a workout, you feel more focused and less stressed.” said Censor.

Call of Duty is a very strategic game that takes a lot of teamwork to master different maps and gametypes. Intelligence is a huge factor when it comes to the overall success of a team.

It is [scientifically proven]( http://www.ncbi.nlm.nih.gov/pubmed/21722657) that cardiovasuclar exercise can help in the process of creating new brain cells. Studies show that working out increases the levels of BDNF, a protein in the brain that helps with decision making and learning, which is a crucial part to succeeding in gaming.

In addition to all of this, exercise significantly increases confidence levels. Just like in any sport, second guessing yourself is one of the worst things you could possibly do. If you lack the self-confidence to make a split second decision, then it could cost you the game.

On Sept. 28, Censor reached a huge milestone in his career as he woke up to 100,000 followers on [Twitter]( https://twitter.com/FaZe_Censor). This number has soared over the past few months and it looks to continue to grow at a torrid pace.

This recent surge in followers can be attributed to his increased maturity level as he has stepped into the life as a role model. Followers tweet him all the time, telling him how much he has inspired them to start working out and living healthy while gaming.

“I feel grateful, lucky, amongst other feelings that are hard for me to describe in words,” said Censor. “It’s all kind of new to me but if I can help anybody reach their goals and aim to be a better person, then that’s all I can ask for.

Recently, Censor announced his partnership with [Gamma Labs]( http://www.gammalabs.net/) to bring exclusive fitness content to his followers. This opportunity gives him another way to inspire people into following his footsteps. One of the ways Censor stays sharp when he competes is through GFuel Energy, one of the most popular products by Gamma.

“Working with Gamma Labs is an exciting experience for me. They have an awesome crew of people that share the same vision as I do, and I believe it’ll help spread our message to a large amount of people,” said Censor.

Censor plans to continue releasing videos and content on fitness as well as expand his audience to new people. People of varying ages look up to him and aspire to become as strong and ripped as him. However, some there are always people struggling to take the initial step and get in a routine.

“Whenever I feel overwhelmed or shy about approaching something I want, I realize that anyone who’s an expert in that craft was once a beginner just like me,” said Censor. “We all have to start somewhere.”

In addition to his recent success as a role model, Censor has established himself as one of the most successful players in CoD. Over his career, he has finished in the top eight of 13 [major tournaments]( http://cod.gamepedia.com/Censor).

Censor is shaping up to be a role model for all members of the community to be a better player and a better person. He has started a movement for all people in the competitive Call of Duty scene. He has created a call for fitness.

Where does your name “Censor” come from?

According to a website, “Censor” was a synonym for the word “Conscience” which was my gamertag at the time. I thought Censor looked cool so I rolled with it.

Favorite moment in your CoD history?