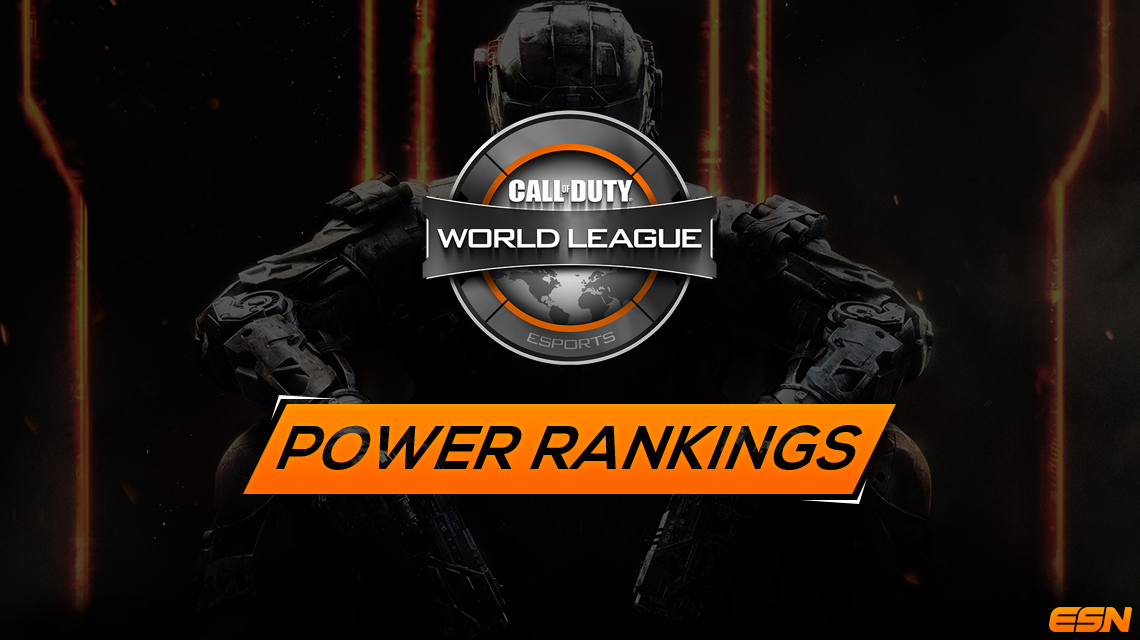 After every week of action, we will be releasing another power rankings article where the teams will either move up or down based on how they perform in their matches, so do not forget to check back here each week for the latest power rankings.

*NOTE: Some of these matches may be rescheduled/replayed due to connection issues.*

A championship title at ESWC this past weekend was enough for our staff to vote OpTic Gaming back into the number one spot in our power rankings. Despite their win at ESWC, OpTic went 1-1 in Week 2 of the CWL, losing 3-1 to H2k-Gaming before winning 3-0 over Team eLevate. In Week 4, OpTic will try to improve upon their current 2-2 record in the league when they take on compLexity Gaming and Team SoloMid.

Rise Nation’s stay at number one was short lived, as they have dropped back down to number two in our power rankings even though they are tied for first in the league with a record of 3-1. Rise also went 1-1 in Week 2, defeating Cloud9 3-0 before they were upset 3-2 by Luminosity Gaming. Rise will look to bounce back from this loss when they play against FaZe Clan and Dream Team in Week 4.

While they may have suffered an upset loss in Week 2, FaZe Clan still remains the number three team in our power rankings. Now sitting at 3-1, FaZe shockingly lost 3-1 to Dream Team, but then responded with a strong 3-0 sweep of 100Thieves. In Week 4, FaZe will try to use their lackluster performance at ESWC as motivation when they face off against Rise Nation and Team EnVyUs.

Team EnVyUs also went 1-1 in Week 2 and are still ranked as the number four team in our power rankings. EnVyUs suffered a surprising 3-0 loss to TSM, but then bounced back with a 3-1 win over Cloud9. EnVyUs will try to improve their 2-2 record when they go up against FaZe Clan and Luminosity in Week 4.

The return of Phillip “PHiZZURP” Klemenov helped to propel H2k-Gaming to a 2-0 showing in Week 2, defeating both OpTic and TSM 3-1. In Week 4, H2k will look to maintain their hot start to the season when they take on Cloud9 and Luminosity.

Cloud9 struggled in Week 2, going 0-2 and dropping one spot in our power rankings. With a 3-0 loss to Rise and a 3-1 loss to EnVyUs, C9 will look to bounce back when they play against H2k and Team eLevate in Week 4.

One of the biggest surprises of Stage 2 thus far is Dream Team, who are off to a fantastic start and have gone up three spots in our power rankings. dT went 2-0 in Week 2, defeating FaZe 3-1 and coL 3-2. In Week 4, dT will put their 3-1 record to the test when they face off against 100Thieves and Rise.

Team eLevate is off to a shaky 1-3 start to the new season, but they remain in the eighth spot of our power rankings. With FeLo replacing Remy, the new eLv roster went 1-1 in Week 2, losing 3-0 to OpTic but then beating coL 3-1. Now that this lineup has some more practice under their belt, eLv will try to turn things around when they go up against TSM and C9 in Week 4.

Another playoff team from Stage 1 who is off to a slow start is compLexity Gaming, who went 0-2 in Week 2 and have dropped down two spots in our power rankings. coL lost 3-2 to dT and 3-1 to eLv, bringing their record to 1-3 on the season. In Week 4, coL will look to recuperate when they take on OpTic and 100Thieves.

Luminosity Gaming has jumped up two spots in our power rankings after a 2-0 performance in Week 2. 3-2 wins over 100Thieves and Rise brought Luminosity to 2-2 on the season, but this squad will be tested when they play against H2k and EnVyUs in Week 4.

Despite making the playoffs last season, Team SoloMid is not off to the best start in Stage 2 as they remain in the eleventh spot of our power rankings. TSM pulled off a shocking 3-0 sweep of EnVyUs for their first win of the season, but then lost to H2k 3-1. In Week 4, TSM will have their work cut out for them when they face off against eLv and OpTic.

100Thieves round out our power rankings after going 0-2 in Week 2 and dropping down three spots in our power rankings. The new kids on the block lost 3-2 to Luminosity and 3-0 to FaZe, and they will try to fix their mistakes when they go up against Dream Team and coL in Week 4.