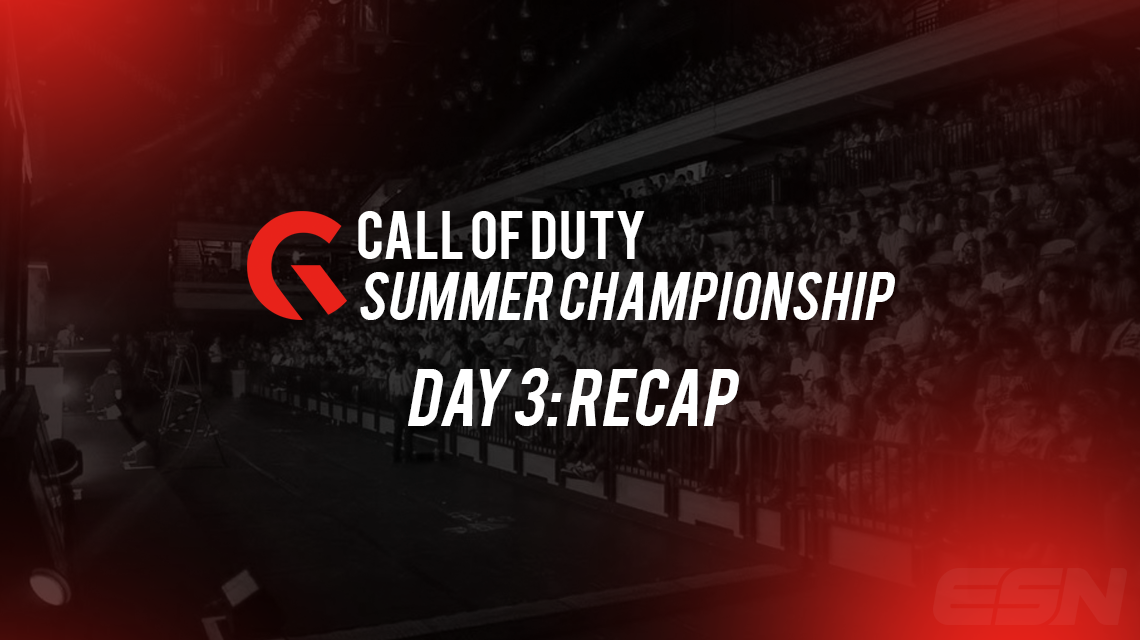 FaZe Clan are your Gfinity Call of Duty Summer Championship winners. FaZe beat out OpTic Gaming in Sunday’s single elimination bracket in the best of seven finals, coming back from a 3-1 deficit in the series.

After the first two days of pool play, eight teams came into Sunday competing for the $100,000 prize and the title of Gfinity Champions.

Team Infused was able jump out to a quick 2-0 series lead behind Brandon “LXT” McAllister. After dropping 40 kills on Detroit Hardpoint he turned in a strong Search and Destroy performance on Solar as well, with Infused taking the second map with a score of 6-5. Games 3 and 4 both went in favor of eLevate, first coasting to an easy 15-5 win on Comeback Uplink followed by a 216-176 win on Retreat Hardpoint. Austin “Slasher” Liddicoat, one of the fill ins playing for eLevate and a current player for Denial Esports, dropped a game high 47 kills on Retreat. Infused took Game 5 Search and Destroy on Riot 6-3 and completed the upset against eLevate led by David “Urban” Marsh, including an insane 1v3 clutch.

FaZe Clan took the opening map, Detroit Hardpoint, with a score of 229-215. Everyone contributed evenly with all four players dropping 30+ kills. Thomas “ZooMaa” Paparatto had the highlight of the match with a four piece in the garage hill. Led by James “Clayster” Eubanks (13 kills), FaZe took Game 2 Solar Search and Destroy as well, winning 6-3. After being down 9-6 at halftime in Comeback Uplink FaZe was able to battle back in the second half and take the lead with 30 seconds left. An interception by Ulysses “Aqua” Silva led to Daniel “Loony” Loza’s dunk at the last second to give EnVy their first win in the series, 17-16. Despite a slow start in Game 4 on Retreat Hardpoint FaZe still couldn’t be denied, they took the map with a score of 247-182 and the series 3-1.

Strong plays across the board led to Epsilon Esports taking a 1-0 lead after winning Detroit Hardpoint 230-219. Epsilon came out very aggressive in their Game 2 Solar Search and Destroy. Jordan “Reedy” Reed led the way with 9 kills and Epsilon won 6-2 to take a 2-0 series lead. Marcus “Mboze” Blanks had a great start in Game 3 Comeback Uplink, starting out the first half 18-9, with OpTic Nation taking a 10-6 lead into halftime. Marcus “MiRx” Carter continued to build on his good performance this event finishing 25-18 as OpTic Nation took the map 19-6. A small tweak in the strategy for OpTic Nation on Retreat Hardpoint saw Steve “Mochila” Canle, normally an AR player, pull out a SMG on certain hills. The adjustment showed as OpTic Nation won game 4, 206-140. Mboze and Mochila both had a good Search and Destroy Game 5 on Raid dropping 9 and 11, respectively. OpTic Nation took game 5 and the series 3-2.

OpTic Gaming opened the series with a 250-123  win on Detroit Hardpoint. Matthew “Formal” Piper led all players with 38 kills. After a slow start Team Vitality came out looking much more confident in Game 2 Solar Search and Destroy. OpTic Gaming, however, came back from being down 4-1 to tie it 5-5 and force a round 11. Vitality clutched up and took round 11. Tom “Tommey” Trewen was the only player on Vitality with double digit kills and the series was tied 1-1. Vitality took Comeback Uplink to overtime and scored in a quick 30 seconds. OpTic Gaming was able to beat the time with seven seconds to spare and took the map and lead the series 2-1. OpTic Gaming closed out the series on Retreat Hardpoint with a 229-173 victory. Seth “Scumpii” Abner dropped 48 kills and OpTic Gaming won the series 3-1.

FaZe came out firing on all cylinders in the Semifinals, Clayster led all players with 46 kills. FaZe took the first map, Solar Hardpoint, with a score of 229-133. The second map, Recovery Search and Destroy, went in favor of Team Infused with a score of 6-5. Despite 14 kills from Ian “Enable” Wyatt AND killing a teammate in the final round, LXT was able to clutch a 1v2 to take the game and tie up the series 1-1. Coming off a frustrating Search and Destroy loss FaZe stopped the momentum with a balanced performance from the whole team on Detroit Uplink winning 12-2 and taking a lead in the series 2-1. FaZe closed out the series on Bio Lab Hardpoint with a score of 228-125 taking the series 3-1. Clayster led FaZe with 40 kills.

OpTic Gaming opened Solar Hardpoint with a win over OpTic Nation, 250-117. Scumpii was the leading force for OpTic Gaming, dropping 47 kills with 11 captures as well. With OpTic Gaming spreading its kills throughout the squad, they were able to cancel out MiRx’s 11 kill effort. OpTic Gaming took map 2, 6-4. OpTic Gaming held a nice lead in Detroit Uplink, heading into halftime up 8-2. Scumpii led the team in Uplinks with 5 and OpTic Gaming won game 3 with a score of 10-6, sweeping the series 3-0.

OpTic Gaming and FaZe Clan met once again in the Finals of an Advanced Warfare tournament, this time at the CoD Summer Championship at Gfinity. OpTic Gaming took the first game, Solar Hardpoint, with a score of 207-133. Ian “Crimsix” Porter had a match high 47 kills. Using the momentum from their hardpoint victory OpTic started out aggressive in map 2, Bio Lab Search and Destroy. Formal led OpTic to a 6-0 win with 10 kills and OpTic held a 2-0 series lead. The first half of game 3, Comeback Uplink, was quite slow compared to past Comeback Uplink clashes.  FaZe went into halftime down 4-2 but the second half was a completely different story. FaZe rallied and won the game with a score of 12-4. ZooMaa led the team with 36 kills. FaZe entered game 4 on the board, making the series 2-1 in favor of OpTic. The fourth map, Retreat Hardpoint, went in favor of OpTic Gaming 201-186, with Formal leading OpTic in kills (46)  and  Crimsix leading the team in captures (11). At this point OpTic Gaming held a 3-1 series lead and only needed one more win to clinch the Gfinity Summer Championship. Recovery Search and Destroy was the next map and game mode in rotation and FaZe wasn’t going down without a fight. They took the map 6-4, behind strong performances from Clayster and Enable and made the series count 3-2 still in favor of OpTic. FaZe picked up where they left off next map, this time on Detroit Uplink. They quickly jumped out to a 5-0 lead and traded dunks with OpTic, going into halftime leading 7-2. OpTic made a push in the second half but it was too little too late and FaZe forced a game 7 with a 13-8 victory. Game 7 was Search and Destroy on and FaZe had all the momentum heading into the deciding game. After a brief pause with some technical difficulties the team’s re-entered the lobby and the match was on. The pause didn’t slow them down, after the restart the teams traded rounds to make it 2-2. FaZe then proceeded to rattle off four straight round wins to win the Gfinity Summer Championship.

With the prize payout being distributed among the top four teams, a consolation match for third and fourth place was needed. The two teams knocked out in the semi-finals faced off on the Challenger stream during the grand finals between OpTic Gaming and FaZe Clan. OpTic Nation closed out the series against Team Infused on Retreat Hardpoint with a score of 200-178 to win the series 3-1. Team Infused finished fourth ($5000) at Gfinity and OpTic Nation finished third ($10,000).