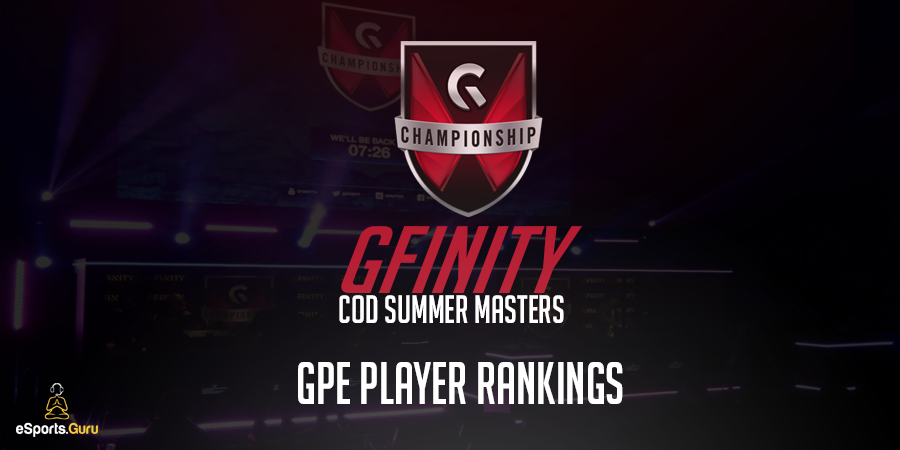 The Call of Duty community has an innate fear of analytics. Comments on a low K/D or a poor objective statistic are met with retorts about the importance of the intangibles and in game leadership. I believe wholeheartedly that both of these aspects are important to the competitive player, but I am cautious to dismiss stats as important to a victory. I developed a system I referred to as AntMan rankings -now named General Player Evaluation- to compare players’ on a diverse range of values to capture a player’s full statistical performance. Players are rewarded equally for all statistics. Please take a look at my work and leave feedback so that I may improve my system. Below are the GPEs for the recent Gfinity Summer Championship in London, England.

General Player Evaluations (GPEs) are based on averages and Z-scores, making them reflective of the pool of talent as a whole. Thus, this system highlights how different a player’s statistical performance is compared to all other players. The six equally rated values of a GPE are a player’s K/D, slayer rating as provided by Cod Stats, scored Uplinks, HP captures, SnD K/D, and team rank/placement. The final GPE is the average of the Z-scores of all six categories. The system reflects better on larger samples, making it particularly effective for large tournaments or full seasons. The MLG Season 2 GPEs showed Optic Gaming’s Scumpii as the highest evaluated player, a qualification validated by his winning the MLG Season 2 MVP. I believe this trend will continue, partly due to the success of the following rankings.

You will notice Camboo’s absence from my rankings. This is because Cod stats did not post his HP caps to the player rankings section of their Gfinity stats page and instead put TwiZz, despite him not being at the event.

Below is the player’s name, rank, and raw Z-score.

I think these rankings provide an accurate glimpse into player performances at Gfinity last weekend. The tournament’s victors, FaZe, have four players in the top 10 and the tournament’s runner-up, OpTic Gaming, have three players in the top 15. Players who perhaps shouldered a large load on a successful team were rewarded (Mirx) while players who fought in vain to keep their team afloat still find themselves fairly compensated despite their team placing (Neslo). We find three EU players in the top 16; Madcat, Joe, and Watson, providing positive feedback that the EU scene is improving to be on par with the American scene. Interestingly, the two EU players who have transplanted to the US, Moose and Jurd, failed to place in the top 25 of the GPE rankings. The worst American player by these standards was Rise’s Whea7s, while the best player was FaZe’s Zooma. Zooma performed excellently in all categories considered in these rankings and was generally considered to be the best player of last weekend. Optic Nation fans should feel confident that their team’s placing was not a fluke and the team showed up as a unit to the London stage.

I will continue to run GPEs for all players in the MLG season and in the coming tournaments. Again, leave all feedback and critiques below to help build a truly effective player ranking system.