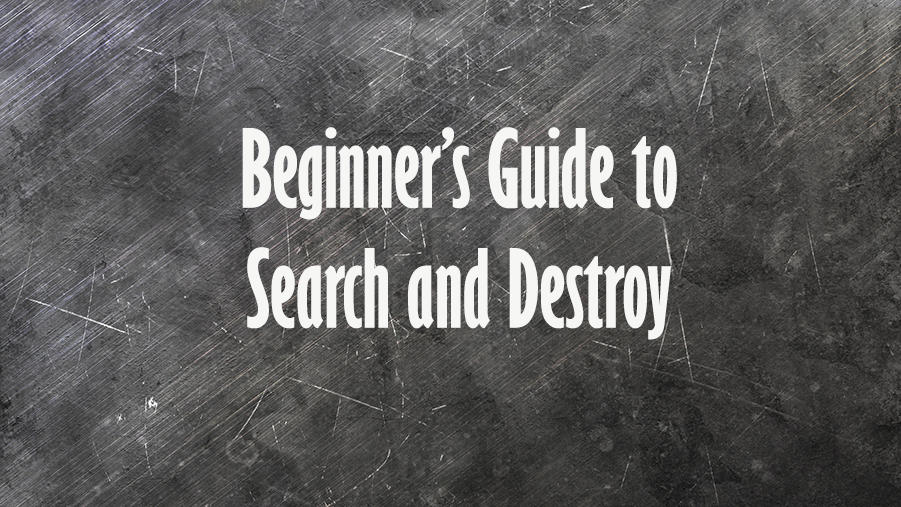 Search and Destroy is the backbone of competitive Call of Duty year after year. It is a round based game mode played until one team wins 6 rounds. The team on offense is tasked with planting the bomb at one of two bomb sites (A or B). They win the round if one of the following objectives are met: The defensive side aims to prevent the bomb from being detonated at either of the bomb sites. They win under the following conditions:

On offense, you want to push up and get control of the bomb sites, but you don’t want to play too fast. Methodically push your way up and check corners as you go. You might want to run smokes or grenades to obscure your movement or to clear an area. Planting the bomb puts your team at an advantage, so make sure to focus on the objective. On defense, you want to cover as much of the map as you can with 4 players, and you want to cover the bomb sites as your main focus. Playing passively is the best way to go about this, as being aggressive on defense is usually unnecessary. However, if the bomb is planted the pace of the game picks up.

One of the top Search and Destroy matches on BO3 according to @slopnessie – Call of Duty® World League https://t.co/3LzGr2cPwG via @YouTube

In SnD, there are a few MUST haves. Dead Silence and Blast Suppressor perks are always top priority. They allow you to move freely around the map without being heard or spotted by enemies. In competitive, where everyone is wearing top-of-the-line headsets, reducing your noise output is important. Many people run a silenced weapon in public matches for stealth, but this only works if the other team isn’t communicating or paying attention to who killed who and where. In competitive settings, people are generally more aware and communicating with each other, so using a silencer does nothing but reduce your range. Primary/attachments: The gun you choose must match your playstyle. When choosing an assault rifle (AR), the M8 or Man of War would be the best choices for holding long sight lines. These guns kill quick and have great range. If banned, the XR-2 or HVK are decent replacements and allow for more variability in map positioning. The best attachments include Red Dot or Elo sights, Stock, and High Caliber if it makes it past Ban and Protect. Submachine guns (SMGs) are used for close range combat and will not be very useful at range. All of the SMGs can be used competitively with the Vesper (now nerfed) and VMP leading the way in power. The VMP holds the upper hand in SnD because of the low number of engagements that happen in every round. Its high damage and fire rate at close range will get those quick kills. When the VMP is banned, any other SMG could be used if you feel comfortable with it. Quickdraw and Grip are two common attachments, everything else is preference. Sniper Rifles such as the Locus or SVG-100 are often chosen in SnD, but are only useful at range and if your teammates are protecting your flanks. Here are two examples of basic SnD classes that are commonly used: AR: Primary: M8 with Elo + Quickdraw + Stock (4 points) Secondary: RK5 (1 point) Grenades: 1 Concussion (1 point) Perks: Fast Hands, Blast Suppressor/Dead Silence. (4 Points with wildcard) SMG: Primary: Vesper with Quickdraw + Grip. (3 points) Secondary: None (0 points) Grenades: Semtex, 1 Concussion (2 points) Perks: Afterburner, Fast Hands, Blast Suppressor/Dead Silence (5 points with wildcard) Specialists Psychosis: Use this to send out three clones that can be used to confuse the enemy. If used at the right time, this specialist ability could give you the jump on a gunfight that you need to win or get you out of a sticky situation. Vision Pulse: Gives you information on where people are on the map in a certain set radius. The only downside is that it shows where you are to the enemy on the minimap when you call it. Glitch: Zip back to a spot on the map that you were a short time ago. You can use this in two ways: To back out of a sticky situation, or to run in quick to get information and get back out. Overdrive: Allows a player to zoom across the map to a power spot or flank before the other team expects it. Heat Wave: Stuns people in a short radius, which can be really helpful if you need to win a clutch situation. Kinetic Armor: Similar with Heatwave, Kinetic Armor it can be used to win a clutch situation. This one deflects all damage to your body (only headshots takes damage) when active, lasting for a few seconds. These are the most prioritized Specialists picks, but if you feel more comfortable with Specialist weapons, you can use those too. The Specialist abilities/weapons should be used in planned situations since you will only get them once or twice a game. Scorestreaks: HCXD, Dart, Hellstorm or Lightning Strike. In SnD, you won’t be accumulating a high score, so the lower the cost the better.