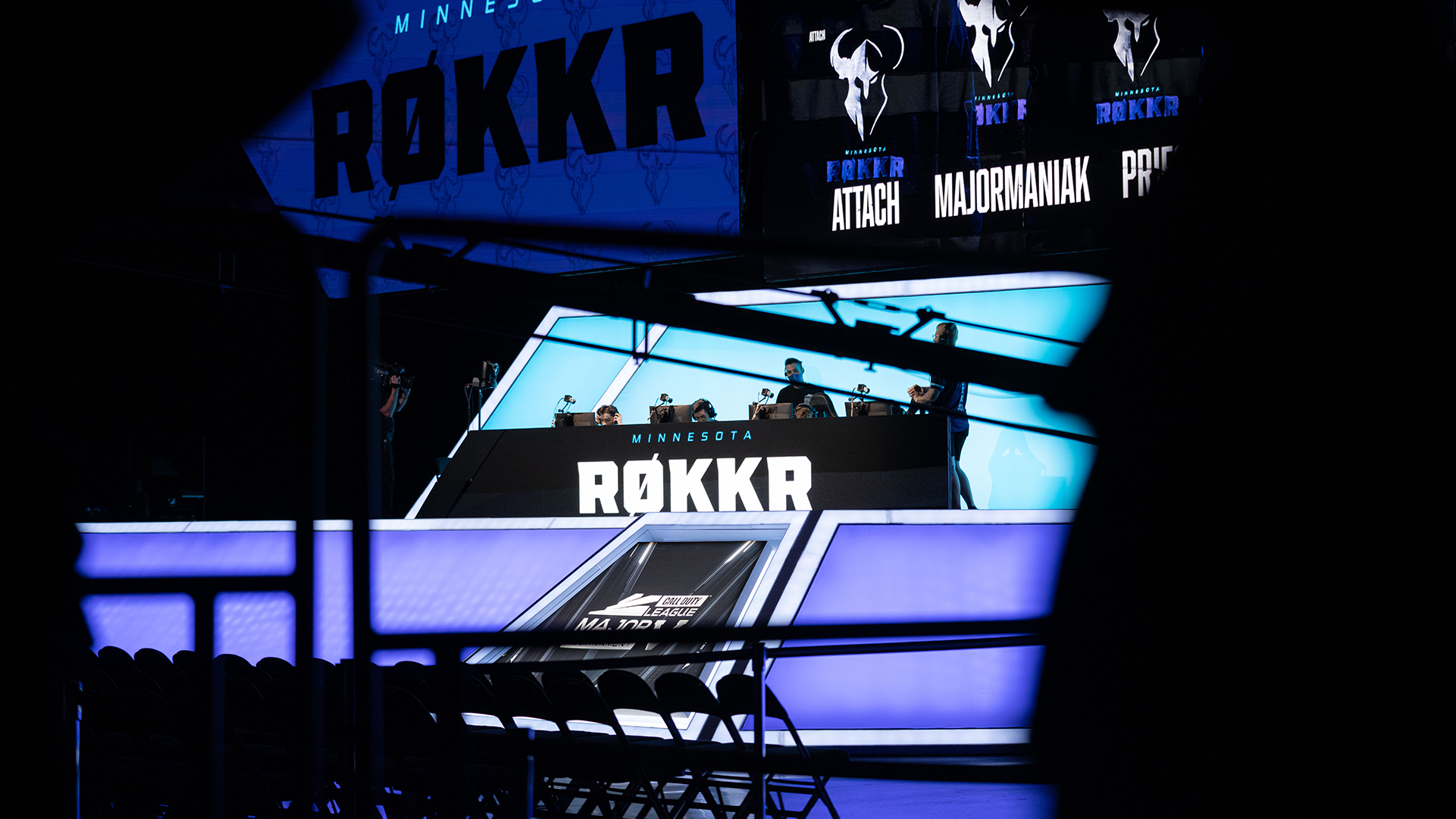 As the crisp pop and fizz came from the opening of his hard seltzer can, one Toronto Ultra fan let it rip.

With the Ultra up two games in the Call of Duty League’s Stage Five Major, the fan lifted the can to his mouth as it poured out all over his clothes, soaking his shirt and pants. For the past half hour, this guy became the ire of the packed house at the Esports Stadium Arlington on Sunday, Aug. 1—so much so that the remaining crowd started to cheer for the Ultra’s opponent, the Minnesota RØKKR, in spite of his belligerence.

Following the elimination of OpTic Chicago the game prior, many fans had left the venue before the Toronto and Minnesota franchises faced off in the grand finals. It seemed, at least in that moment, that this series would be a doozy. Those who stuck around found enjoyment in poking fun at the very intoxicated Ultra fan who just wanted to see his team win.

As the series heated up, with the RØKKR showing signs of life after falling down 4-0, the insults directed toward that man continued to get worse. It felt like a Modern Warfare 2 lobby came to life, a fitting return for the Call of Duty scene’s first fan-attended offline event since the COVID-19 pandemic started.

For the first time in nearly 18 months, more than 1,000 fans piled into Esports Stadium Arlington, which quickly became filled with cheers of excitement, jeers of hate, and everything in between—a celebratory moment for not just Call of Duty but for esports as a whole. After a grueling pandemic, a bystander couldn’t have guessed that the scene ever missed a beat, if not for the tell of masks covering the face of fans. The long wait ultimately paid off too since the RØKKR and Ultra played one of the best series in modern competitive Call of Duty history.

The weekend started off hot, literally. With doors opening at 11:30am CT on Saturday, July 31, fans began to line up outside more than two hours earlier in the Arlington sports complex in the 97-degree Texas heat, giddy to see a part of the action. “Everything is bigger in Texas,” the saying goes, and it became clear that the Call of Duty League’s Stage Five Major would be no exception.

This is what the Call of Duty League was always supposed to be. But after just four events, its inaugural season and planned Western world tour were sidelined by the start of the COVID-19 pandemic in March 2020. While the 2020 season successfully pivoted to online play, competitive CoD’s roots have always been planted in the idea of in-person competition, not players competing for millions of dollars from their home offices.

The return to LAN at the Stage Four Major in June marked a big step forward, allowing players to compete on the most level playing field in some time—but without fans watching on and adding the pressure of crowd noise around them. Getting the Stage Five Major right, with fans back in attendance, meant the world for the Call of Duty League. This was a big moment, making good on a promise made in 2019 when the league announced it would franchise for the first time.

In the downtime since the Call of Duty League went online-only, OpTic Gaming—Call of Duty’s most beloved franchise—returned control back to its former longtime executive, Hector “H3CZ” Rodriguez. In 2020, H3CZ led the Chicago Huntsmen to become one of the more popular brands in the league, as well as a top contender for almost every event. But the Huntsmen were no OpTic and the OpTic of 2020, based in Los Angeles and run by Immortals, were often jeered. In a three-way game of cards, H3CZ and Huntsmen owners NRG reacquired OpTic, rebranding the Chicago Call of Duty franchise and reinstating “H3CZ’s OpTic.”

As people piled into the venue, it became clear what was missed. Fans chanted “let’s go, OpTic” even hours before the popular franchise took the stage.

Following the Dallas Empire’s win over the L.A. Thieves on July 31, Dallas team captain and former longtime OpTic player Crimsix walked to the front of the stage for his post-game interview. He instantly became accosted by fans, who booed him and interrupted the interview, so much that one question from interviewer Jess Brohard wasn’t even audible.

“We want FormaL,” the crowd continued in its chants.

“Yo, everyone shouting stuff, shut the hell up,” Crimsix yelled back mid-answer. “Shut your piehole, you dirty little rats.”

Brohard handed the mic over to Crimsix.

“I just rushed over here,” he said. “It was delayed because I had to go to the shitter. Word to Cellium. I’m out.”

The crowd continued to boo. The Dallas Empire were the “home team” by definition, but it wasn’t even close in terms of who the arena got behind.

During the brief break between games, fans started to settle down until the moment they had all been waiting for arrived. As OpTic’s Scump emerged from backstage, the crowd ignited, rising to deafening decibels of noise—akin to that of a jet engine starting up in one’s close proximity.

For the next hour and a half, the crowd lived and died by every gunfight.

An audio delay threw off the vibe since the Call of Duty League opted to keep its broadcasters remote for this event. The commentary didn’t match the real-time action being shown throughout that arena. But it ultimately didn’t matter because the moments equally paid off.

In a one-vs-two retake on Raid, Scump flanked the Seattle Surge’s Prestinni and Octane. With two quick sprays of his AK74u, Scump caught the Surge players off guard, clutching the retake and letting out a roar into the crowd as OpTic pulled ahead. The crowd erupted.

OpTic went on to defeat the Surge and it seemed like the popular franchise may have a shot at going all the way.

Heading into Championship Sunday, a feeling of nervous excitement spread throughout the venue. Fans knew something special might happen, but it was unclear exactly what. OpTic fans anxiously sat on their hands, knowing their squad had to defeat their bitter rival—Crimsix and his Dallas team—who bested OpTic twice in the previous major.

The next 90 minutes were as tense as they were intense.

Coming out of the gate, OpTic bludgeoned Dallas, introducing them to the 100-point club on Moscow Hardpoint. After Dallas leveled the series, the teams went to Checkmate Control for game three. With a chance to take the map, OpTic needed to defend one last point. Dallas held an advantage in the life count as they jumped on the point with 0.0 seconds showing on the clock.

Scump tried to play his life, waiting for Envoy to join him on the contested B spot, but Crimsix called his bluff, beat him to the point, and took him down with all three Empire members waiting under the wing of the plane. Envoy looked to stay alive as the crowd held its collective breath, but the miraculous play was not to be and Dallas sent it to round five.

OpTic clutched up in the final round, taking their momentum into the series’ fourth map where they eliminated Dallas with a win on Raid Hardpoint. OpTic fans let out a sigh of relief. Their beloved team finally got the monkey off their back, beating Dallas in a major for the first time since Stage Three. But, more importantly, they guaranteed a top-three placing for the first time all season. Their joy was short-lived, however.

Toronto have been a top team all season, having won the Stage Two Major and consistently fighting for the top spot in the league with FaZe, Dallas, and OpTic. After defeating OpTic on Friday, July 30, the two were geared up for a rematch—this time in the losers bracket finals. Unbothered by the hostile environment toward other teams in the venue, Toronto took the stage and bested OpTic in four maps in what felt like a much quicker series.

Toronto didn’t just send OpTic home, but their fans too. More than half of those in attendance at the Esports Stadium Arlington exited ahead of the finals.

The final series of the weekend didn’t disappoint those who stayed all the way through, though. These were the most dedicated Call of Duty League fans, those who didn’t care who made the championship. They were here to see Call of Duty at its highest level—and boy, did they get it.

At first, Minnesota looked like they didn’t belong in the grand finals of a recreational league, let alone the world’s highest level of competition. The tenacity the RØKKR showed through their winners bracket run seemed lost. Whether it was a night of bad sleep or shaky preparation, the RØKKR’s second bout against Toronto started off sluggish.

Basking in the glory of a Toronto 4-0 lead in the best-of-nine, the drunk fan continued to instigate the crowd. The crowd, some without a horse in the race any longer, was clinging to the RØKKR and the volume grew as the team continued to extend the series one win at a time. With their backs against the wall, the RØKKR continued to find the moments that mattered with the loud support behind them.

Before long, Toronto’s worst nightmare became a reality. A team that always look composed were visibly shaken. Minnesota put their foot on the gas, and before long, an even 4-4 showed across the jumbotron. This was the moment.

The RØKKR held all the momentum and the cards in their hands. The building erupted when Attach took down CleanX to clinch the sixth round needed to win the map, series, and Stage Five Major title. Minnesota players huddled in celebration, the entire crowd was on its feet, and not a single person could believe what they had just seen. Those who stayed witnessed the greatest comeback in Call of Duty history and maybe the greatest comeback in esports as a whole.