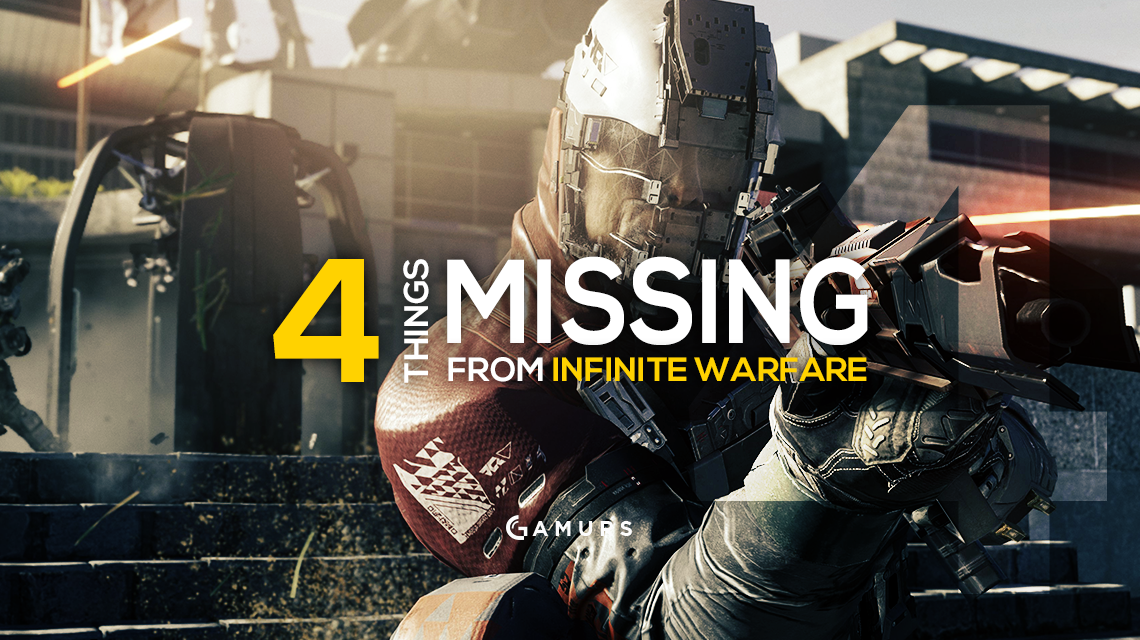 Call of Duty: Infinite Warfare launched this past weekend along with Modern Warfare Remastered. The new game was not entirely new to players; a two-weekend beta period gave players a solid taste before release. The full-game release, however, is still missing a few key features that Call of Duty fans would like included.

Noticeably missing from Infinite Warfare, but not Modern Warfare, is the combat record. This key feature has been used by Call of Duty players for years to look at their personal statistics. The combat record gives players a cumulative overview of their performance in the game, including stats like number of wins and losses, number of kills and deaths (with corresponding ratios), and shot accuracy. Every Call of Duty player has bragged about their kill-death ratio at one point or another. It’s a stat that most accurately describes a player’s gunskill, besides testing it in-game, of course. So far, with Infinite Warfare, players are unaware of their cumulative kill-death ratio and therefore can’t compare against their friends. In fact, there is currently no way to compare any statistics whatsoever with friends.

Along with the combat record, the leaderboard is the traditional determination of skill in Call of Duty multiplayer. The leaderboard provides information for each gametype, comparing score-per-minute, objectives, time played, and total kills amongst players. For some players, their leaderboard ranking is everything. But right now, Infinite Warfare has no leaderboard and therefore no way to compare stats.

The lack of a combat record andl eaderboard does not take away from the gameplay itself, but it certainly does take some incentive away. There has always been something fulfilling about being ranked at the top of your friend’s list for a certain game types, or to have a higher KD than your teammates. These statistics add a bit of incentive to the game, something to play for and achieve. Luckily, the combat record and leaderboards are incoming.

Call of Duty multiplayer has always been popular because it’s fun to compete, but for the most competitive players out there, Infinite Warfare is missing a few more key features.

Currently, there is no ranked playlist in Infinite Warfare. This goes along with the theme of missing features already mentioned: anything statistically driven was not included in the release version of the game.

For this feature, we can cut Infinity Ward some slack. Working ranked playlists sometimes take a bit of time to complete and implement, at least that’s predicated by previous Call of Duty titles. However, we can only hope that a ranked playlist will be added soon. In Ghosts, Infinity Ward failed to include one, a grave mistake on their part. After Black Ops II introduced “League Play,” the best-ranked playlist to date, Ghosts followed up with “Clan vs. Clan,” a far inferior successor. This devolution of ranked play spawned four very different renditions of the playlist when all we wanted was a league play clone on each new game. The problem is that we have heard next to nothing about what the ranked playlist will be like.

When Ghosts came out, Daniel Suarez from Activision stated, ““We’re continuing the work that [Treyarch] did, esports is a big initiative for us.” That being said, they provided the least esports support in-game out of the last four titles. Are there more empty promises this year?

The good news is that there is already a ruleset in place for competitive play this year. Infinity Ward made the effort to contact former professional players (and some current) to come up with a preliminary set of rules that includes base bans, much to the chagrin of competitive fans everywhere. They also made it clear that the ruleset will be adjusted based on feedback, giving more control to the community than ever before.

No one appreciates “Theater Mode” more than competitive players. It provides the perfect way to go back, watch gameplay, and improve positioning. Even YouTubers make great use out of this mode when recording gameplay, but it’s not available in Infinite Warfare. At least not yet.

When Ghosts came out, Infinity Ward didn’t believe it was necessary to add theater mode, just one year after Treyarch implemented a fantastic version in Black Ops II. They failed to do so again and there has been no word from Infinity Ward on the possible addition in the future. While this isn’t the greatest concern, competitive players and YouTubers are now missing a critical tool. Edit: Reports indicate Theater Mode will not be added.