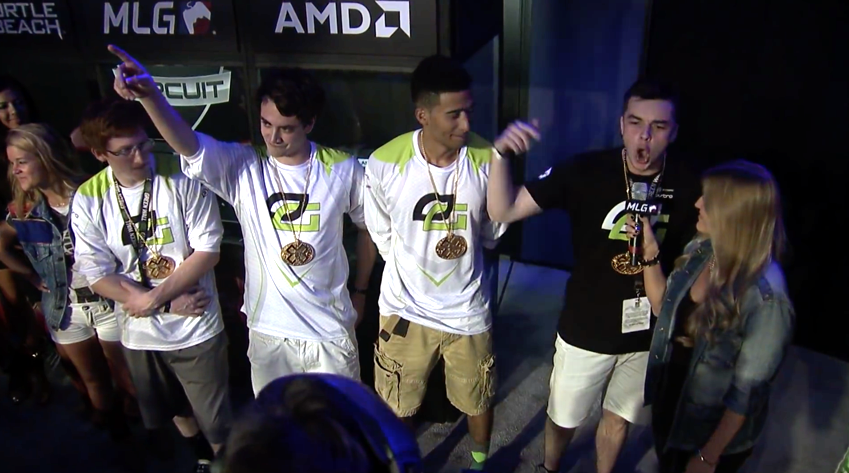 One of the most memorable tournaments in Call of Duty history took place three years ago today.

The 2014 MLG X Games Invitational was one of the most historic events for Call of Duty esports—and it was the first esport event to award X Games medals.

Entering this tournament, Evil Geniuses—Patrick “ACHES” Price, Tyler “TeePee” Polchow, Damon “Karma” Barlow, and Ian “Crimsix” Porter—was the best team in Call of Duty: Ghosts. This team dominated the first half of the Ghosts season, including winning the $1 million 2014 Call of Duty Championship under the compLexity Gaming banner.

ACHES and company entered the X Games Invitational as the first overall seed. Eight teams were invited to participate in the tournament, and the teams were divided into two groups based on their seeds. The first, fourth, fifth, and eighth seeds were placed in Group A, while the remaining teams battled it out in Group B.

The groups were double-elimination, so a team just needed to win two best-of-five series before losing two in order to qualify for the medal round.

In Group A, EG actually lost to Team Kaliber in the winners bracket finals. Evil Geniuses responded by defeating Strictly Business twice in order to qualify for the medal round alongside tK.

Meanwhile, the second and third seeds ran away with the two spots from Group B. OpTic Gaming, featuring Seth “Scump” Abner, James “Clayster” Eubanks, Jordan “ProoFy” Cannon, and Matthew “Nadeshot” Haag, took down FaZe Red and Team EnVyUs in order to qualify, while the boys in blue swept Curse Orange twice to earn their spot in the medal round.

The final four was set in a single-elimination bracket to determine who would walk away from this event with X Games medals. Team Kaliber squared off against Team EnVyUs in the first round, while Evil Geniuses faced OpTic Gaming.

In one of the most shocking series on Call of Duty: Ghosts to date, the Green Wall defeated EG to send the best team in the game down to the third-place match. In the other semifinal showdown, Team Kaliber—Brandon “Sharp” Rodgers, Jeremy “Neslo” Olsen, Jevon “Goonjar” Gooljar-Lim, and Bryan “Apathy” Zhelyazkov—took down Team EnVyUs to advance to the gold medal match against OpTic.

The gold medal match between OpTic Gaming and Team Kaliber was one of the most memorable grand finals in Call of Duty history. The series went back-and-forth, culminating in a winner-take-all game five Sovereign Search and Destroy.

ProoFy was firing on all cylinders to start game five, going 7-1 in the first five rounds to give OpTic a commanding 4-1 lead. Goonjar picked up an essential one-versus-two clutch for tK in the sixth round, but OpTic responded by pushing the game to match point in round seven.

Team Kaliber refused to go down without a fight, however, as Neslo kept tK alive and brought the score to 5-4 in favor of OpTic.

In the 10th round, ProoFy and Clayster were left in a two-on-three for OpTic. With roughly 40 seconds remaining in the round, both players got kills simultaneously to flip the script and put Goonjar in a one-on-two situation with tK’s tournament life on the line.

Goonjar did manage to eliminate ProoFy, but Clay killed Goon from behind as time expired to give OpTic their first championship since UMG Chicago 2012.

While all the players on OpTic earned the first ever Call of Duty X Games gold medals, this was also Nadeshot’s first career MLG championship—a massive achievement for one of the scene’s most likeable players.