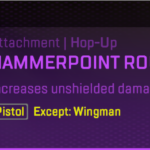 A new season in Apex Legends means a number of changes to the game’s meta. Weapons rotate in and out of care packages, new legends are added to the game’s roster, and the loot pool is tweaked to breathe fresh air into how fans play the game. With Apex‘s 12th season, Defiance, Respawn Entertainment added a new hop-up to the ground loot and brought back one from previous seasons.

Most hop-ups look the same from a distance. It’s only when you hover over them and a description pops up when it becomes clear which hop-up is in front of you. But for new players, a quick glance may not be enough to know exactly what each hop-up does. Each season also rotates some hop-ups out or adds new ones in, which only adds to the confusion new players may experience. In a fast-paced shooter like Apex, it’s less than ideal to stand around reading a description, so it’s important to have a good grasp over what each hop-up does before you enter a match.

Here are all the hop-ups in Apex’s season 12, Defiance, as well as what each of them do.

The Dual Shell hop-up was first introduced to the game in season 11. This attachment excels in those quick-paced fights, reducing the amount of time it takes to fully reload a Mastiff shotgun or 30-30 Repeater by half.

This hop-up widens the bullet (or arrow) spread in a Y-like pattern while hip-firing. This attachment, although equipped to weapons that may not be ideal for close-range combat, allows you to pack more of a punch when fighting an enemy that got a little too close for comfort if you’re firing without aiming down the sights.

Like Shatter Caps, Deadeye’s Tempo has been in the game since season nine when the Bocek Bow first released. This hop-up is fairly situational and can only be attached to the Bocek and the Sentinel.

When you begin firing with this hop-up attached, you’ll notice an indicator appear on your screen. The indicator lights up in blue to show when the “perfect moment” occurs. If you shoot while the indicator is lit, you will receive a bonus in firing speed until you stop firing within those windows or need to reload. The indicator lights up in sections, with the middle section showing when you need to fire to receive the bonus, and the sides lighting up to indicate that you have the increased fire rate applied to your next shot.

The Kinetic Feeder arrived in Apex with the start of season 12. Players can add this attachment to the Peacekeeper or the Triple Take.

This hop-up acts somewhat like a level four magazine, in that it reloads the gun without the player needing to manually reload. Unlike the level four magazines, however, it doesn’t fully reload the gun. It only reloads while the user is sliding, and only by a shot’s worth of bullets at a time. For the Peacekeeper, that means one bullet per reload, while the Triple Take gets three. The Kinetic Feeder also speeds up the choke when sliding.

Weapons: Pistols, except the Wingman

The Hammerpoint Rounds hop-up returned to the loot pool in season 12 after being removed from the game in season nine. Many Apex fans have reveled in its return because of the power it brings to the RE-45 in particular.

This attachment fits the P2020, RE-45, and Mozambique. It’s description is short and sweet: this hop-up causes these pistols to do increased damage to enemies without a shield. And with the RE-45’s quick rate of fire, that means this hop-up allows this pistol to dish out much more damage than it normally would after you’ve cracked an enemy’s shield.

Hop-up description: “Reloading when near empty will speed up reloading and overload the next magazine.”

Remember, the attachment grants a hastened reload speed only when near empty. So if you use up all of a magazine, you won’t be getting the reload speed bonus.

The HAVOC takes a brief second to charge before firing, and the Devotion charges up to a faster fire rate while firing. Although the time it takes for these weapons to dish out the maximum amount of damage is only a second or so, it can feel like eons in a quick-paced first-person shooter like Apex, and opponents can easily get the upper hand in that amount of time.

That’s where the Turbocharger comes in. This hop-up has been in the game since the first season, although it was removed in seasons four and five. The Turbocharger negates the charge-up time, allowing players to get the Devo and HAVOC’s full potential without having to wait.