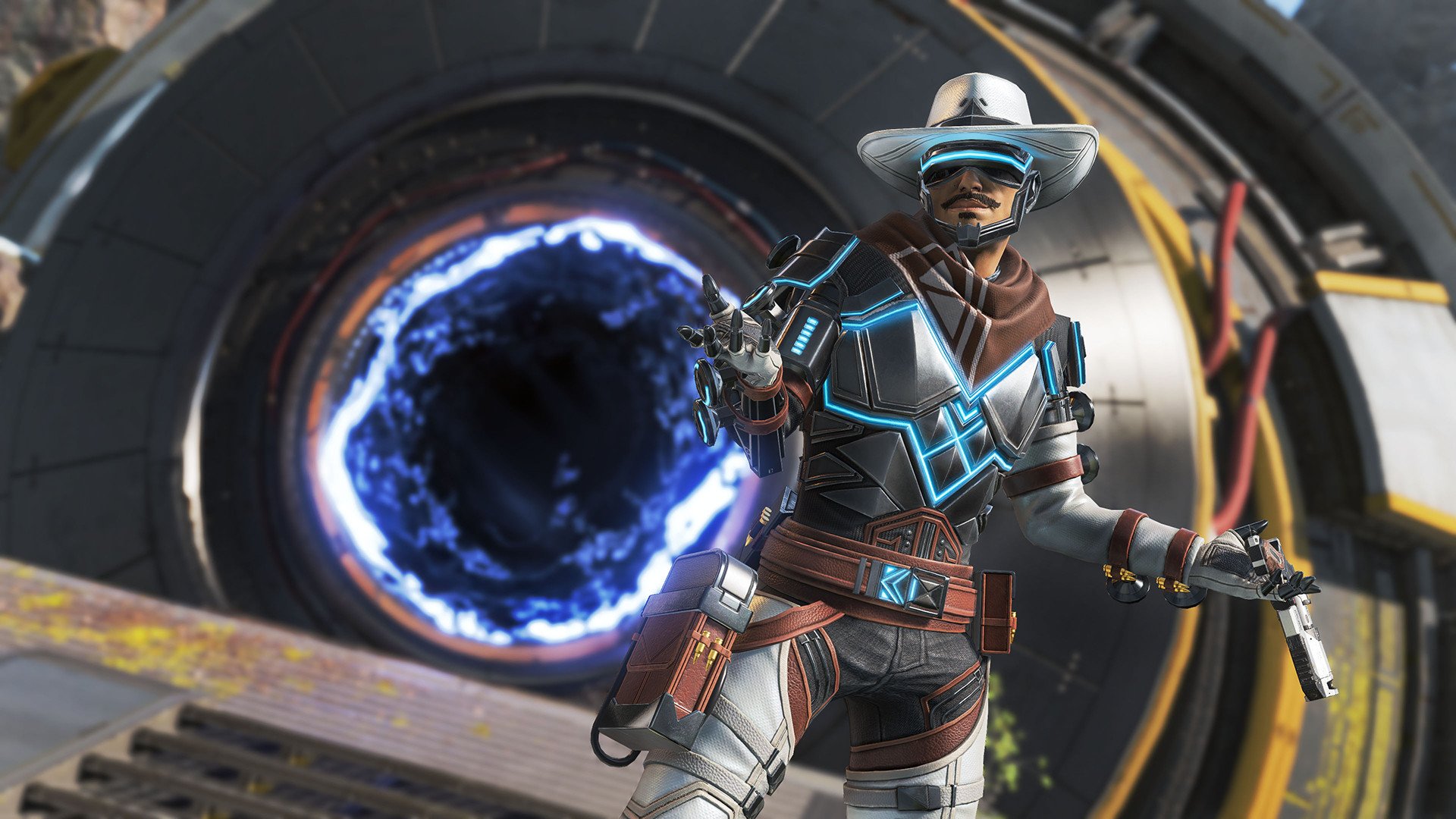 There’s nothing wrong with lookin’ good in the ring—or at least, that’s what Mirage always says.

As one of Apex Legends’ original eight legends, Mirage has a ton of skins at his disposal. Some are highly sought-after for their rarity, while others stand out simply for their unique designs. Whatever type of design you prefer—whether it be the flashy, colorful options or the ones with more muted subtleties—there’s a skin out there for every Mirage main.

Here are the best skins for Mirage in Apex.

Nothing screams “apex legend” more than a… cyborg cowboy?

Mirage’s The Show Stopper skin dresses the Holographic Trickster in a futuristic cowboy outfit. Neon blue accents line Mirage’s chest armor and arm attachments, standing out against shades of black, brown, and white. Leather straps wrap around his hips and legs, giving him that Wild West edge, while a cowboy hat and scarf-like neck wrap complete the look.

The Show Stopper hit the store’s shelves in 2021 with Apex’s Mirage Edition, which players could purchase for $19.99. Like other legend editions, the Mirage Edition also came with a matching weapon charm, badge, and Volt skin, as well as 1,000 Apex Coins. Respawn Entertainment has since ceased the sale of these types of bundles and removed them from the stores, adding to The Show Stopper’s rarity.

Even though it’s impossible to buy legend editions now, the Apex developer has brought back individual legend edition skins in the past. Most recently, Respawn put Bloodhound’s Intimidator and Lifeline’s Guardian Angel skins back on sale for a limited time. It’s possible for Respawn to do the same with Mirage’s The Show Stopper skin in the future, so keep your eyes on the store’s rotation if you’re looking to add this look to your collection.

It’s a running joke in Apex that Mirage isn’t as cool as he tries to be. But what if he looked like he was?

This colorful Legendary skin reimagines Mirage in hip streetwear. He wears a puffy yellow and purple-striped jacket and no shirt underneath. In this look, the Holographic Trickster clearly understands the value of accessories; a black fanny pack wraps around his hips, and a second cross-body bag is strapped to his bare chest. Black, gold, and silver dermal accents are scattered across his body, and his catch-phrase “Bamboozle” can be seen tattooed in black script across his upper stomach. To wrap up the outfit, he wears a sporty pair of orange goggles around his head.

Apex fans could purchase Lit Witt as part of the battle royale’s 2022 Anniversary event for 2,400 Crafting Metals or 1,800 Apex Coins. Respawn released this skin as part of a matching trio with Wattson and Crypto.

Mirage is often the butt of the jokes in Apex, and there are very few costumes that depict his class-clown persona better than an actual clown. And since Respawn apparently loves to give Mirage that Western edge, might as well make him a rodeo clown.

Mirage’s Chuckles the Barrelman skin fully commits to that rodeo clown theme. In this look, Mirage wears a denim vest atop a yellow button-up shirt. His chaps and neck scarf share the same white and black cow-print pattern, and his face is painted with sad clown makeup. Shiny red accents and leather straps contrast the rest of the outfit to tie it all together.

Chuckles the Barrelman was released in season nine as part of the 2021 Thrillseekers Arenas event. Other skins from this event have returned to the store in the past, so there’s a good chance Respawn will make Mirage’s rodeo clown outfit available for purchase again in the future.

Despite all the laughs made at Mirage’s expense, there’s no denying the legend has a heart of gold. Mirage’s Boogie Down outfit embraces his charming personality while taking players all the way back to the 1970s.

In this disco-themed look, Mirage wears a mostly golden bodysuit and high-fashion accessories. The shiny bodysuit is the real highlight of this skin, with its black and white accents and diamond-shaped back cutout. It’s simple yet classy, featuring a subtle line patterning that resembles Olympus’ landscapes and draws in the eye on closer inspection.

Boogie Down Mirage hit the live servers with Apex’s Fight Night event in February 2021. Players could purchase the look for 1,800 Apex Coins or 2,400 Crafting Metals while the event was live. The skin returned to the store a second time during the Raiders event at the end of 2021.

New to Apex? Missed out on store deals? Don’t worry, there are still ways to look flashy in a battle royale match.

Each legend joins the Apex Games with a set of release skins, and of Mirage’s four original Legendary outfits, Ghost Machine is easily the best of the bunch. In fact, it’s safe to say Ghost Machine is one of the cleanest looks from his entire wardrobe thanks to its simplistic yet elegant color scheme.

This Legendary skin can be crafted in the legend customization tab for 1,200 Crafting Metals at any time. Since there’s no need to wait for a store rotation or upcoming event, it’s a perfect choice for players new to Apex or those who’ve recently switched their main to Mirage. Ghost Machine dresses Mirage in a white camo-themed bodysuit with crisp red accents while retaining iconic parts of his base design in his goggles and arm attachments. The armor on his stomach resembles a six-pack of abs, and the same protective plating can be found on his shins.

This Legendary skin also has several fun color variants that occasionally rotate into the store. Seafoam Swindler features a blue take on Ghost Machine, while The Dark Artifact exchanges the white and red for black and orange. Recolors offer fans a way to spend their extra Legend Tokens (and players usually have a lot of them) but also allow fans to spruce their favorite skins up with different color patterns.