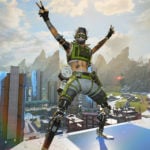 After months of region-locked betas and tests, Apex Legends Mobile is finally live globally. The mobile version of the game was designed from the ground up to make sure it performs like a native mobile game. Considering PC ports have a way of malfunctioning at some point, Respawn Entertainment made the right call to ensure player satisfaction in the handheld scene.

Most players will look forward to trying out their favorite legends on mobile, while others may already be looking for ways to perform better than the majority of the game’s player base. Even if you have the skills, playing with a weaker legend can come back to haunt you in competitive lobbies.

Keeping up with the meta and choosing the most powerful Apex Mobile legends will be essential on your patch to victory.

Right after you touch the ground after leaving the jump ship, you’ll need to get to the nearest loot source to start hunting down the players near you. Considering the importance of speed in Apex’s early game, it’s no surprise that Octane finds himself on top of the tier lists.

Thanks to Octane’s speed, players can wrap up their looting game faster than they could with other champions, which gives them an advantage. The jump pad also seems to be more effective in Apex’s mobile version since it’s relatively harder to aim at airborne targets with a touch screen. This means that Octane players can be bolder with jump pad plays in Apex Mobile.

The team with the most information will often emerge victorious from skirmishes and will often be the last one standing. When it comes to gathering information, nobody does it better than Bloodhound.

Bloodhound’s entire kit revolves around tracking and marking enemies. Once you know where your opponents are, you’ll have the element of surprise on your side and plan your attack accordingly.

Aiming with a touch screen is considerably harder than aiming with a mouse or a controller. Most players will rely on the game’s aim assist feature in picking up the slack.

Aim assist doesn’t work on invisible targets, however. Not only does Wraith’s invisibility allow her to sneak around objectives, but it’s also an excellent tool to turn around fights. Going invisible and repositioning yourself will catch your opponents off guard, giving you a clear line of sight in the process.

Lifeline alone may not be able to keep up with the rest of the legends in the game, but she will be a crucial part of every squad in the game. When your most offensive strategies don’t work out, you’ll need to retreat to replenish your health, which will be where Lifeline steps into the equation.

With a Lifeline in the squad, you’ll have an advantage over other teams regarding healing and reviving. It doesn’t mean that you can start playing more recklessly, however, Lifeline players will also need to ensure their survival, and if you go over the board, they’ll have a hard time doing that.

Players looking to assemble the perfect squad will also want Gibraltar in their teams. A support, a tank, and a damage dealer will often be the best composition since most squads will be stuck with three damage-oriented legends making them less durable.

Gibraltar’s shield especially becomes hand in the Apex Mobile since your teammates will be able to use the additional level of safety to out-gun your opponents.