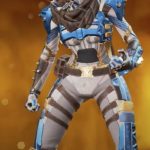 Apex Legends is full of different characters with unique abilities. But one of the most popular legends in the game is Wraith.

There are many different looks available for the Interdimensional Skirmisher. The skins listed below were introduced to Apex during seasonal or in-game events. Cosmetics added to the game through such events can either be obtainable through in-game challenges, Apex packs, battle passes, or simply as a reward for performing an in-game action.

If you happen to like an event-skin, you should add it to your collection before the event wraps up since the chances of it becoming available again will be unlikely. While this makes it difficult for players to obtain every skin in the game, it increases the rarity of each event-related cosmetic.

Here are some of Wraith’s best and rarest cosmetics available in the game today.

Night Terror was added to Apex in the first season of the game, This skin’s name is rather self-explanatory since any player who were to see Wraith in real life looking like this would potentially describe the situation as a Night Terror.

Players were required to hit level 15 in the first season’s battle pass to unlock Night Terror.

Protector of the Void

Protector of the Void features Wraith like a Nordic fighter, and it’s regarded as the rarest Wraith skin that’s currently available in the game. She looks like she’s ready to take a role in a God of War game after completing an Apex match. This awesome-looking skin was introduced to the game during the Iron Crown collection event, which took place during season two in 2019.

The name of this skin sounds British, but it has more of a Nordic vibe to it. Wraith is featured in a black armor in Queen’s Guard and rocks red hair.

The skin was added to the game during the War Games event, which took place in 2021.

Wraith’s abilities allow her to access multiple dimensions. While she was passing through one of them, she met Voidwalker, a version of herself from another universe. The two also switched timelines once, allowing the Voidwalker skin to make its debut.

The Voidwalker skin was added to Apex during an event that also carries the same name in season two.

Seasonal events tend to bring out the best of Apex. Halloween and Christmas allow developers to experiment with fun skin ideas that bring more color to the game.

The Mistress of Evil skin for Wraith resembles a witch. The purple shades and the overall dark tones of the skin complement each other relatively well, and the hat just seals the deal.

The Mistress of Evil was added to the game during the 2019 Fight or Fright event, Apex’s annual Halloween celebration, and the skin made frequent appearances in the shop later on as it became available again in 2020 and 2021.

The Emerald Enchantress was also added to Apex during a Fight or Fright event.

Taking a single look at Wraith while she has the Perfect Soldier skin equipped should be enough to strike fear into her enemies’ hearts.

The skin may look simple from outside, but when you get close, you should start noticing all the finer details. The Perfect Soldier skin was added to the game in the fourth season as a part of the battle pass.

Voices from the Past

Voices from the Past is a recolor of Night Terror, but Wraith looks more like an Amazonian warrior in this one.

This authentic skin was added to Apex during The Old Ways event in April 2020 and it cost 1,800 Apex coins. The skin also appeared in the shop during the 2020 Black Friday sale and also popped up randomly in 2021.

It’s hard to tell whether there was ever a Wraith player who ever wondered how the legend would look like if she was made of marbles, but there’s Marble Goddess as their answer. The marble body is paired up with some armor that shares the same color as the marble. The golden covers on the armor make the cosmetic look quite sophisticated and a golden fist should be damaging enough to land final blows.

The Marble Goddess skin was introduced to Apex during the Lost Treasures event in June 2020, and players had a second chance to grab it in September 2021.

Wraith’s skin wardrobe involves many different concepts. The High Class features the legend as a member of a higher society that potentially likes staying stylish regardless of the battle’s conditions.

The High Class skin was introduced to the game during the seventh season and it was awarded to players who got to level 25 on their battle pass.

The Risen Queen skin for Wraith adopts an Egyptian vibe. Wraith looks like a pharaoh in the Risen Queen, and she’s wrapped in what looks to be a gold covered outfit and the pants balance out the look.

Risen Queen was added to the game with the Champion Edition, which comes filled with various unique skins and unlocks all legends up to Horizon.

It’s not unusual for stores to run end-of-year sales so they can get rid of their excess stocks. Though inventory isn’t really a problem in Apex, there’s an end-of-year sale in Apex as well and that’s when Phasewalker for Wraith made its way to the game in 2020.

Phasewalker is a recolor of the Voidwalker skin and one of the more popular skins in Apex.

Hellcat is the second Wraith skin that features cat-like elements. In Hellcat, Wraith wears a golden cat mask with blue glowing eyes and wears a red cape that looks intimidating no matter what angle you look at it from.

The Hellcat skin for Wraith was added to Apex during the Anniversary collection event, which took place in 2021.

The Prowler in this skin’s name gives away its overall style from the beginning. Wraith is featured as a cat in the Void Prowler skin, and the skin does an excellent work of combining black and yellow.

The Void Prowler skin was added to the game during the Aftermarket event in 2020.

The Demon’s Whisper skin for Wraith looks like it was taken out from a superhero movie that revolves around demons and even dragons.

Wraith is featured in green and red armor in Demon’s Whisper and completes her look with a traditional Japanese mask. The skin was added to the game during its ninth season and it was given out to players who made it to battle pass level 50 during the season.

Neon Spectre features Wraith in a purple space suit and was in the cover art for the Evolution collection event that took place in September 2021. The skin was added to the game during the event and it was available for 14 days.

Holo-Day Bash is Apex’s Christmas-New Year’s classic. Respawn uses the opportunity to add thematic skins to the game alongside limited-time game modes. Wreath is one of these skins and it features Wraith in a green snowsuit and has snowflake details.

Wreath was added to the game during the 2020 Holo-Day Bash and became available once again inside a bundle in 2021.

Introduced in the System Override event in March 2020, Overclocked features Wraith in a yellow suit. She looks like the cartoon adaptation of the Marvel villain Shocker in the skin with green instead of red. Overclocked returned to the shop in August 2021.

Wraith’s Wrath is a red version of the Overclocked skin. The skin features Wraith in a black-red suit and it was added to the game during the Anniversary collection event, which took place in 2021.

Most epic skins only feature a simple color change, but not Cold Sweats. This skin turns Wraith’s skin blue and compliments the overall look with a dark armor that has blue lightning strikes on it. She looks like the Shocker from the Amazing Spider-Man movie series, and the skin was released during the Monsters Within event in October 2021.

Introduced with the season 11 battle pass, the Vision Walker skin features Wraith in a colorful outfit. This skin was awarded to all players who started progressing through their battle passes since it was the reward for the first tier.

The Founder skin for Wraith features the legend in a red outfit and was added to the game as a part of the Founder Pack, which is no longer available.

Survivor is one of the earliest skins in Apex. It was added to the game during the first season as a first-tier reward on the battle pass. The skin features Wraith in an orange/brown armor with red paintings on her face.

The Bloodshot skin for Wraith features the legend in armor that seems to have eye-like figures on it. These orange shapes blend well with the overall look. The skin was rewarded to all PS Plus subscribers in August 2019.

Forgotten in the Void

Forgotten in the Void is potentially the most colorful rare Wraith skin in the game. Considering it was available as a Twitch drop, it’s no surprise that the skin features colors of the platform. Two shades of pink and purple cover Wraith’s armor and hair.

Silver Specter features Wraith in an outfit that does an excellent job of combining white and black as its main colors while complementing the overall look with burgundy and golden plates.

The skin was added to the game during the fifth season and it was the first reward on the battle pass.

The Royal Guard skin features two of the most royal colors: purple and gold. The outfit itself also resembles a ski-suit and it was added to Apex as part of the season seven battle pass.

Queen of Hearts is another Twitch collaboration skin for Wrath. The skin was available in January 2021 and features the legend in a rather classic suit that has hearts on it.

Woad Warrior was introduced to Apex during the Chaos Theory collection event in March 2021. The skin features Wraith in an outfit that resembles a Sheriff’s uniform and has a golden Apex logo on her chest.

Unlike the skins listed above, the following entries can be purchased off the in-game store. They owe their rarity to their cost, however, since players will need to unlock a certain legendary skin before they can unlock any of these styles. In addition to requiring unlocks, players will also need crafting materials to unlock these skins and they can only be obtained from Apex packs.

The Void Specialist skin is cool on its own, but the color pink just looks slightly off with Wraith. Though the pink featured on Void Specialist looks well polished, it leaves room for improvement.

The Airship Assassin upgrades the skin with a black and dark brown color and a golden mask. These changes make the skin more intimidating and the increased rarity that comes from the skin’s crafting requirements makes it more exclusive. The skin made its last appearances in the shop during the 2020 Black Friday Sale and in the Recolor Store in August 2021.

The Flashpoint skin for Wraith takes the Vengeance Seeker and upgrades it with an arctic style. The Flashpoint features a white and blue color but retains the warmer tones of yellow toward the boots.

Depths of the Void

Quarantine 722 was also one of the skins that featured too little color. Quarantine 722 is basically a completely white skin with only a tint of red around the torso. Depths of the Void, on the other hand, spices up the formula with evenly distributed blues and yellow, which makes the skin look better.