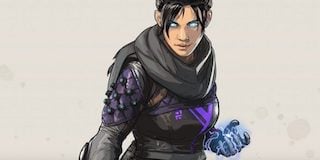 Wraith players will gain a completely new visual this month. Apex Legends’ next Twitch Prime skin is tailor-made for the portal-hopping legend, according to its rewards page, and players can obtain it starting April 15.

Apex’s Prime Loot page updated to show Wraith’s silhouette on April’s skin, a clear sign that she will be the next legend to get a Twitch Prime drop. The date was also updated and points to April 15 instead of the vague “April.”

Fans speculate that the Twitch Prime drop could be Wraith’s Queen of Hearts skin. The cosmetic seems to take inspiration from Alice in Wonderland, according to renders by data miner Biast12.

The skin adds a series of patterns to Wraith’s jumpsuit, styled after each suit in a deck of cards. The character’s makeup is inspired by the Queen of Hearts in the live action adaptation of Alice in Wonderland.

Fans believe that the Queen of Hearts skin is a Twitch Prime drop since it doesn’t match other data mined skins, which reveal possible cosmetics for Apex’s The Old Ways event.

The skin is scheduled for release on April 15, which matches Apex’s pattern of releasing Twitch Prime cosmetics in the middle of the month. The latest visual, Mirage’s Lucky Charmer, is available until April 16, which gives players a brief window to obtain both cosmetics with one signature.

To obtain Twitch Prime drops, players must first link their Twitch and Amazon accounts, then connect the Twitch account with their Origin account.