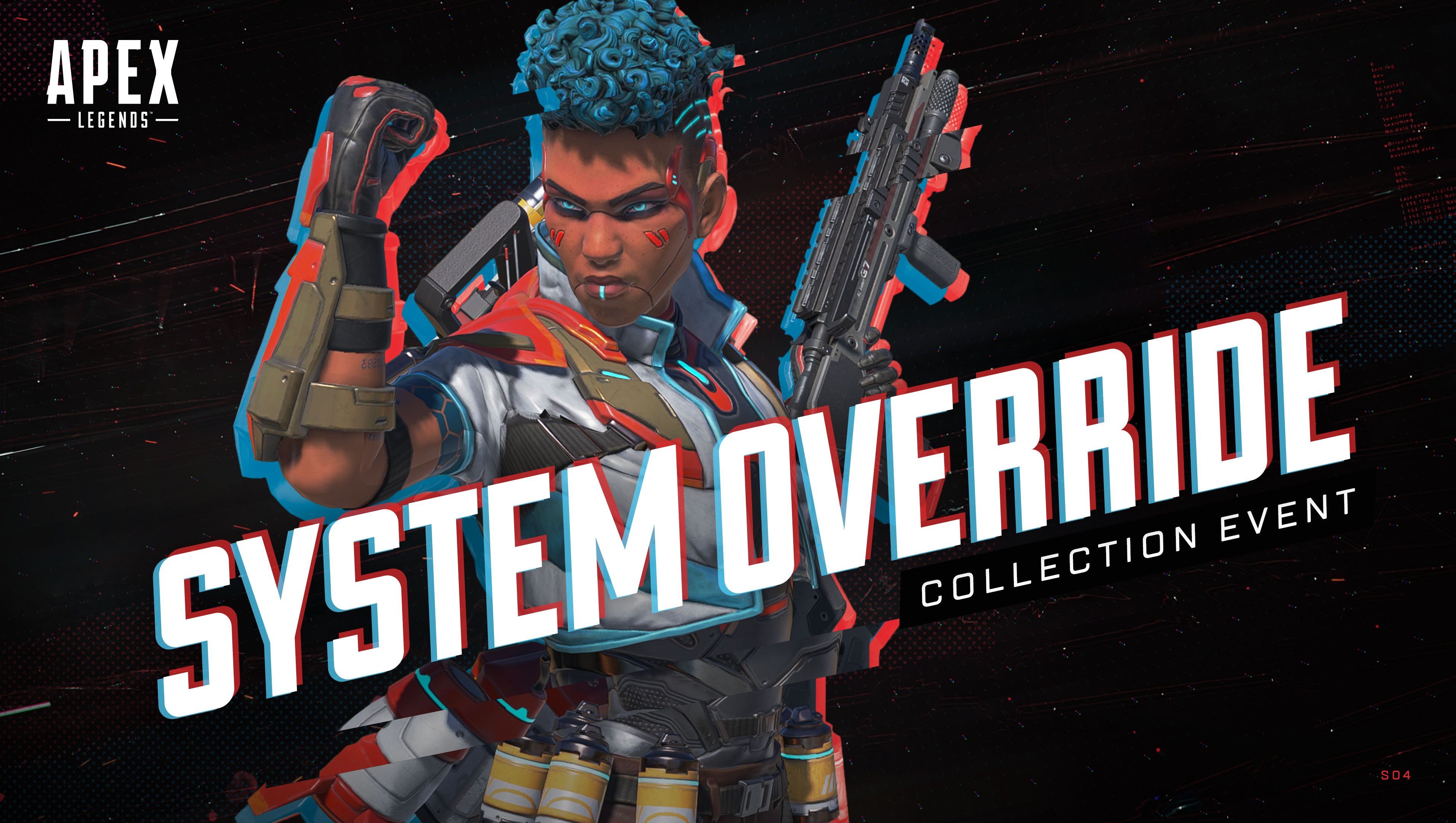 The System Override collection event is live and it’s bringing in some new content. Apex players have until March 17 to get their hands on limited-time cosmetics, try the new Déjà Loot game mode, or chase Octane’s recently-added Heirloom set.

It’s a big update and here’s what’s coming with it.

There’s an inherent randomness to battle royale games that keeps them dynamic and levels the playing field. Déjà Loot doesn’t just water down the role of RNG, it obliterates the “luck” in the game by rigging all the randomized elements in Apex.

In the new game mode, everything is set in stone. The loot will always spawn in the same exact spot for the duration of the event. The dropship’s path and the ring patterns will change every day to help shake up matches. “The intent is to create a short term meta shakeup and reward players for learning the new progression,” Respawn said in the patch notes.

The limited-time mode will also change arenas over time. The first week will be hosted on World’s Edge, but Kings Canyon, Apex’s titular map, is making a return to the map pool to finish the event. Players can dive into the season two version of Kings Canyon during the second week of the LTM.

Déjà Loot is also the only place where players can find one of System Override’s most intriguing novelties, the Evo Shield.

Apex’s newest armor is a testament to the old adage that “the best defense is a good offense.” The Evo Shield grows in capacity based on damage dealt and can potentially outrank purple armor—if you land your shots, that is.

The new equipment starts off as the weakest shield in the game, offering players 25 protection—the same as a white shield. Its capacity first increases after dealing 100 points of damage and increases once more after inflicting another 255 damage. It takes another 500 points to reach the final stage in the Evo shield, which grants 125 shield total—25 more protection than gold shields. The extra protection doesn’t come with any perks, such as faster item usage, however.

“It doesn’t have any perks or anything, so the gold armor might still be more situational,” design director Jason McCord said on Apex’s devstream. “The hope is that you’d actually have a choice based on the situation, whether you would rather take a gold armor or a fully red armor.” McCord also admitted that the shield is going to promote poking, especially for snipers.

The patch notes say that “progress also carries over from person to person,” which means that lucky players who manage to strip an Evo Shield off an opponent can be rewarded. Respawn also revealed that it’ll consider adding the armor to all matches once System Override ends based on player feedback.

The gameplay changes in System Override aren’t restricted to the limited time mode. Respawn is pushing a series of adjustments to legends, weapons, and the inventory system.

Bloodhound is getting the lion’s share of the tweaks. Their tactical skill had its distance increased threefold and its duration got a one-second boost. It comes as a tradeoff, however, since its activation time was doubled. The patch notes say that the reasoning behind the changes is “for Bloodhound to use their tactical as they are approaching towns pre-combat versus reacting while in a fight.”

Gibraltar and Crypto also suffered minor adjustments. The health on Gibraltar’s gun shield was reduced to 50 (previously 75), a nerf to a legend that parts of the community consider overtuned. The hacker gained a slight buff. His primary weapons will now reload automatically when entering drone view.

The next update is also changing two of the armaments in the game. The Peacekeeper is getting yet another nerf, while the Sentinel gains some firepower. The shotgun’s magazine size was reduced by one round and its reload times were increased slightly by 0.1 seconds. The sniper saw an increase in 70 damage per shot, up from a previous 65, and a faster rechamber rate, down to 1.75 seconds from the previous 1.85.

The inventory system is getting an overhaul, too. The base inventory capacity has been increased to 10 slots from eight and backpacks expand it even further. Tweaks to stacking offset the boosted capacity, however. Light, Heavy, and Energy ammo stacks will now be composed of 60 bullets instead of 80. Healing items, such as Syringes and Shield Cells, will stack every four items and larger items, such as Medkits and Shield Batteries, can only be stacked in pairs. Lastly, each grenade will take up its own inventory space.

Despite the significant gameplay changes, System Override is a collection event at its core. The update is bringing a series of limited-time cosmetics as well, including a new Heirloom set for Octane. The skins seem to have a common technologic theme, which echoes with the motif in Apex’s fourth season, titled Assimilation. Players can unlock 24 event items through loot boxes and direct purchase. Those who do will gain Octane’s new Heirloom set as a reward.

The highlight of the new heirloom set is a stim-infused butterfly knife specifically tailored for Apex’s daredevil. The melee weapon skin has a flashy, expertly designed inspect animation that’s in line with Octane’s antics. The butterfly knife favors flashy displays of sleight of hand but is also a risky object to wield if a trick goes wrong. It suits Octane’s personality and lore, though. The finishing touch is a Stim needle, which allows the legend to inject himself with his trademark stim that makes him run faster.

Octane’s Heirloom is also accompanied by a community-requested feature. Players can now get “heirloom shards” in loot boxes instead of a specific set. This will give users a choice on exactly which set they wish to unlock and not have them rely on rare odds to obtain an item. The change won’t affect drop rates or erase the progress for Heirloom sets, however.

Players can also unlock free skins for Revenant, the Peacekeeper, and the Wingman by progressing through in-game challenges. You can complete them concurrently with Battle Pass challenges to shorten your grind for gear.

Quality of life and bug fixes

The System Override update fixed a myriad of minor and major bugs. The most significant one, however, is a glitch that allowed Bangalore players to become invisible simply by equipping one of two skins. Respawn disabled the cosmetics before the update but has now reinstated them.

The developers also toned down the muzzle flash for some weapons, a recurring request from the fan base. Fast-firing guns, such as the popular R-99 or R-301, had intense muzzle flash that made it hard to sustain accurate fire when aiming down sights. The tweaks will apply to all weapons that aren’t shotguns and snipers.