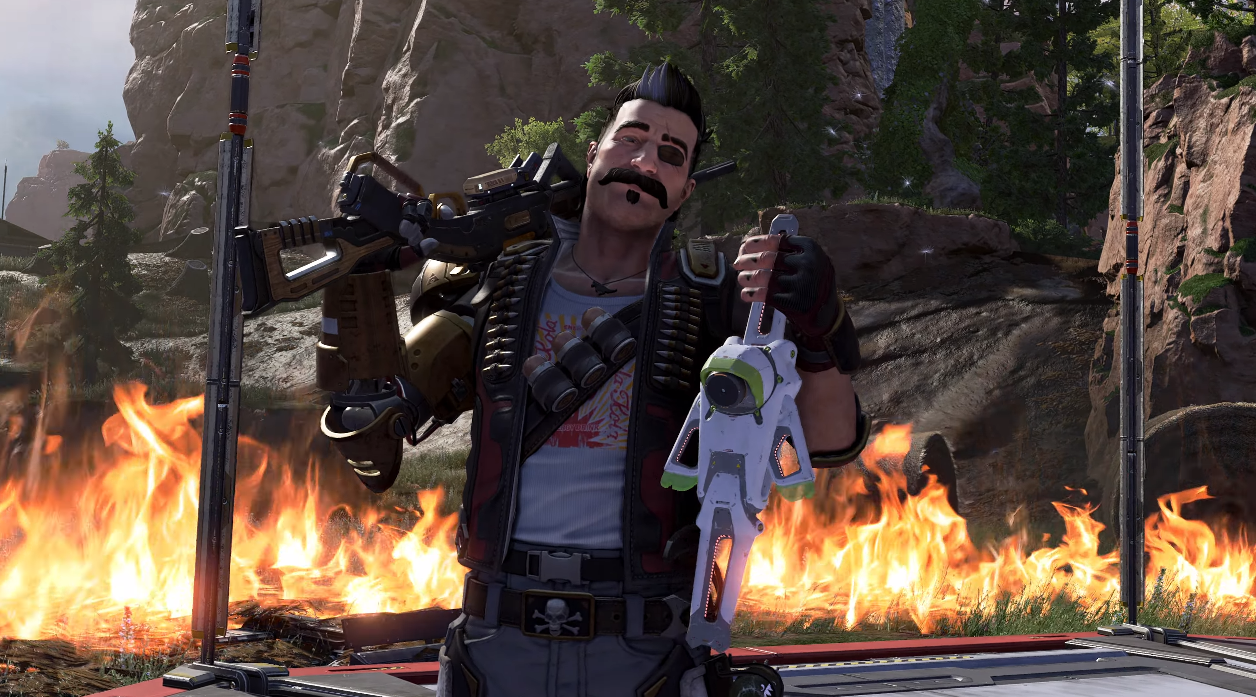 Walter “Fuse” Fitzroy’s introduction to the Apex Games in the season eight launch trailer was marked by exciting theatrics, fireworks, and—fittingly—explosions. What was supposed to be a cheerful event, albeit narcissistic, quickly went downhill when Fuse’s old buddy hacked his ship, fired at onlookers, and detonated remote explosives that left a crater in Kings Canyon.

The game’s other legends certainly won't be pleased with the Australian’s entrance. But Fuse is a “hard person not to like,” lead writer Amanda Doiron told Dot Esports.

Respawn devs thoroughly enjoyed designing the Explosives Enthusiast for Apex Legends season eight, Mayhem. Fuse is a charmer. He’s charismatic and “very good at winning over everyone,” Doiron said. And his captivating personality quickly took off on its own.

“Every character is a seed, and his seed was a little grenade that we planted and watered over time,” game designer Eric Canavese said. “As soon as we started breathing that life into him, he totally took off. He was his own character, he was his own person.”

Since creating a character is one of the most cross-disciplinary endeavors at Respawn, developing a new legend involves a “holy trinity” of gameplay, design, and backstory, according to team director Steve Ferreira. And devs have to take numerous questions into consideration throughout the entire process. Is it fun for players to lose themselves in this character? Can players relate to this character? Do players want to be this character?

At Fuse’s core is a legend based around explosives. But Respawn was careful not to create this overly-militaristic bomb expert. Instead, they dialed Fuse’s “over-the-top” and “bombastic” personality to 11, creating a “guy you want to go to the pub with” and “hear stories from,” Ferreira said.

With every legend, there are several early iterations that don’t make the final cut—and Fuse is no different. One of his first tactical abilities involved him sucking up all the live grenades on the ground near him, defusing them, and adding them to his inventory. But this didn’t seem to resonate with his character.

“We liked it, it was cool, but it became situational and it wasn’t really leaning into that explosion,” Canavese said. “It’s cool to defuse, but it’s way cooler to blow things up.”

Even more surprising is what Fuse’s ultimate could’ve been. Devs initially planned on giving him a mortar kit that could be placed on the ground and used by teammates. Activating the mortar would open up the map, allowing you to ping locations from an “exceptional” range and rain down a single bomb. While this would’ve been a devastating and unique mechanic, it strayed too far from the battle royale’s core gameplay.

“That was fun,” Canavese said. “But we ultimately felt it didn’t keep up with the pace of Apex and it was a little bit disingenuous to how we wanted combat encounters to go, just staying back and crouching in a corner.”

Fuse’s current ultimate ability launches an airburst of bombs that rain down and create a ring of fire that closes players in. Like a more powerful thermite grenade, the ability deals a lot of initial damage and then ticks for more while slowing enemies. As catastrophic as it sounds, Respawn put several counters in place to ensure that it’s (hopefully) balanced.

Wattson, Apex’s resident projectile destroyer, counters both of Fuse’s abilities with her Interception Pylon. An Octane Jump Pad, Pathfinder zipline, and Wraith portal may also help a team escape the flames. But devs are always concerned with any ability that might limit a legend’s mobility, so they’ll be keeping an eye on Fuse once he’s released to the masses.

As for what legends pair best with the Aussie, game designer OT Harrison shared a few possibilities.

“Any ability that tries to confine players in a space, especially outdoors, will probably combo well with your Gibraltars and your Bangalores,” he said. “We’ve seen combos using the Fuse ult, Horizon’s Black Hole, and trying to keep players in one exact spot, and then you can nail them that way.”

Apex’s eighth season kicks off tomorrow, nearly two years since the battle royale was first released. Mayhem welcomes a new legend armed with bombs, bullets, and an explosive personality. And if his gameplay is anything like his Apex Games debut, season eight will be a blast (sorry).