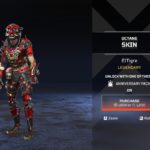 Apex Legends is celebrating its second anniversary and the legends are dressed up to party. The Anniversary Collection Event is bringing a slew of new cosmetics to the battle royale, along with a hefty crafting discount.

The new collection contains 24 recolors of popular skins for several legends. The visuals share a crimson and gold theme and offer a host of cosmetics for a total of 13 characters that range from the eight members of the original cast, plus the new legends up to season five. Rampart, Horizon, and Fuse sit out of the collection for now.

To celebrate the anniversary, Respawn is offering a one-off 50 percent discount for crafting costs. Players can craft their Epic cosmetics for just 400 metals and legendaries for 1,200—the same price as a non-event item. The sale only applies to crafting metals, however, and the price in Apex Coins (AC) stays the same: 1,000 AC for an epic and 1,800 AC for a legendary.

As usual, completing a collection yields a special reward. And this time, it's worth gold. Players who acquire all 24 cosmetics will earn 150 heirloom shards, enough to get a set of their choosing. If you're looking to chase the elusive set, make sure to take advantage of the crafting discount to put a dent in your loot boxes.

Related: How to get Heirloom Shards during Apex Legends’ Anniversary Event

The crafting discount is extremely handy for players who don't want to go after their own heirloom set. The recolors are available for the same price as their non-event counterpart, but they include a chance to grab versions of limited-time skins, such as Wraith's Void Prowler and Bloodhound's Wise Warrior.

Here are the new items: