This set introduces some interesting new retrains and support for the “Three Musketeers of Face Cards”—King’s Knight, Queen’s Knight, and Jack’s Knight. And, perhaps more importantly, it has some incredible reprints and chase cards folded inside, too.

In total, the set has 10 Ultra Rares, 15 Super Rares, and 37 Rares, entirely bypassing Common rarity because it is a special side set. There are also 15 cards that are also being printed in Collector’s Rare, and the introduction of the previously OCG exclusive Millennium Rare for some special cards.

Taking into account the potential meta-relevance of each new card and archetypal support, along with their general popularity of the reprints, here are some of the best cards to chase if you plan on playing for the right hand.

At the top of the list is certainly the insanely expensive Lighting Storm.

A card that can act as Monster or Spell/Trap removal when you have no face-up cards on your side of the field is massive in today’s game, giving you plenty of versatile ways to impact the fieldstate. And any reprint is great for a card that would run players $80 for a single copy, especially when it is meta-relevant.

Lightning Storm will still be a pricey card, but this Ultra Rare version opens the door for more players to fit it into their deck building budget while the Secret and Collector’s Rare variants will be an option for collectors or the rarity maxers. 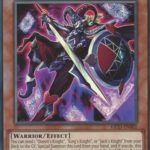 Poker Knight is making a resurgence, and at the crux of that is the archetype’s new Effect Monster, Joker’s Knight. And, while we won’t know just how good this new core is going to be until players get to actively play it and test against the current meta staples.

Joker’s Knight is easy to summon, can be used as a combo piece within the Poker Knight, and fits into general Warrior strategies, too. It can also bring itself back and easily facilitate an entire deck using its effects, even when dealing with the historically slow Poker Knight core that is getting all of these upgrades.

Along with Joker’s Knight, Face Card Fusion is a new way to play with Light Warrior Fusion Monsters using Queen’s Knight, King’s Knight, and Jack’s Knight at the center. Joker’s Straight is a Spell that will let you utilize the three Poker Knights almost immediately to get resources on the field, and Joker’s Wild, Court of Cards, and Thunderspeed Summon are cards that will help push the poker narrative even further.

There is also a new Link Monster, Arcana Extra Joker, but it might be pushed to the side for being too slow to bring out and get online compared to lower Link requirement monsters.

Burning Soul got a bit of pre-release hype because it looks like it will be an interesting way to access Synchro Summoning in a similar fashion to Super Polymerization, while also grabbing a card from your Graveyard and adding it to your hand.

It is limited to being used when you already have a level eight or higher Synchro Monster on the field, but in decks that focus on that summoning mechanic, it has a chance to become an instant staple.

If you don’t see a new card or reprint you want in King’s Court, Konami has loaded the set with incredible Collector’s Rare and reprinted the three Egyptian God cards, Slifer the Sky Dragon, Obelisk the Tormentor, and The Winged Dragon of Ra, in the TCG’s first Millennium or Pharaoh’s Secret Rares.

Even if there wasn’t new support for the Gods out in the wild or being printed soon, just the concept of the Millennium Rarity would be enough to sell people on trying to chase them in the set. The fact that it is the God Cards also just makes it that much easier to sell to older fans based on nostalgia.

As for the other Collector’s Rare, Lightning Storm, Reinforcement of the Army, and Rivalry of Warlords are good rarity bumps. Here is a full list of each top rarity card available in the set that players will grab packs to pull.

Additional shoutouts to some of the other really cool cards like Gilti-Gearfried the Magical Steel Knight, White Rose Cloister, and the new XYZ Monsters being released, specifically the really strong counterplay that Number F0: Utopic Draco Future could bring to a lot of decks. They could find some cool spots in some of the niche decks trying to break into the meta.