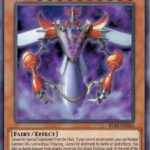 Timelord cards in Yu-Gi-Oh! are typically Fairy creatures with no stats but possess powerful effects instead. The condition to summon them usually requires you to have an empty board to avoid paying a tribute.

While the main idea behind these creatures is to help control-oriented decks by stalling the game until you have your win condition, Timelords can be included in a wide variety of decks, making them quite flexible.

Here are the five best Timelord cards in Yu-Gi-Oh!

Metaion, the Timelord is a no-stats Fairy with various effects. If you control no monsters, you can summon it without a tribute. It can’t be destroyed by card effects and you take no battle damage if the card is attacked while in the attack position. At the end of the battle phase, you can return as many monsters on the field as possible to the hand and inflict 300 damage to your opponent if this card battled. During the standby phase, you have to shuffle it into your deck.

Gabrion is similar to other Timelords regarding the way you can get it on board. At the end of the battle phase, you can force your opponent to “shuffle as many cards your opponent controls as possible into their deck(s), then they draw cards equal to the number shuffled into their main deck.” If they have Extra Deck creatures on board, they’ll have to resummon them with their conditions. That makes this card a nice counter to decks that rely on Extra Deck creatures.

Sandaion is one of the more rare Timelords, featuring 4,000 ATK/DEF in stats and having no way of summoning outside of the condition where your opponent controls a monster. It can’t be destroyed by battle or card effects and neither player takes damage from attacks involving this Timelord. If you battle with this card, however, at the end of the turn, you’ll inflict 2,000 damage to your opponent. That makes Sandaion a perfect finisher in situations where your opponent might have a powerful defensive board.

Lazion is one of the best Timelord creatures in terms of dealing with decks that involve resurrecting or bringing back cards from the graveyard. If you battle with this card, at the end of the battle phase, you’ll shuffle all cards from your opponent’s graveyard into their deck, forcing them to restart their tactic of sending cards to the graveyard and bringing them back with different spells. And even if their deck doesn’t rely on such a tactic, Lazion still has an impressive ability that inflicts 1,000 damage to your opponent if they draw a card once per turn. If you have card effects to give your opponent additional card draws, you can potentially lethal them with Lazion in a few turns if they’re low enough on health.

Zaphion is similar to Metaion. She has zero ATK and DEF and the same restriction of being unable to be Special Summoned from the deck. She also has the same effect where you can Normal Summon her without a tribute if you have no monsters. At the end of the battle phase, if you battled with this card, you can shuffle all Spells and Traps your opponent controls into the deck. This can set up a deadly combo if you draw both Zaphion and Metaion since you’ll clear the board of any threats your opponent might have.