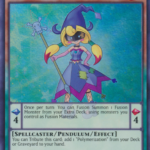 Polymerization cards in Yu-Gi-Oh! allow you to combine tribute monsters into a more powerful monster with various effects.

The Polymerization trait is one of the oldest in the game and doesn’t have multiple effects compared to modern spells. But over the years more spells have been added to help support this strategy.

Here are the best five Polymerization cards in Yu-Gi-Oh!.

King of the Swamp

King of the Swamp has mediocre stats of only 500 ATK and 1,100 DEF, but its effect to be substituted for any one Fusion Material or be used as Polymerization is powerful. This flexible effect can help you have great turns when you’d miss a key component of a Fusion Monster. He is one of the best additions to any Fusion-oriented deck.

Fusion Recycling Plant allows you to discard one card per turn to add one Polymerization from the deck or graveyard to your hand. On top of that, you can target one Fusion Material monster used this turn to return him to your hand. You can continue having strong turns by exchanging extra cards into Polymerization and using it for Fusion every turn. By getting one monster back, you can have another explosive turn one after the other.

Fusion Recovery allows you to target one Polymerization and one Fusion Material that was used for Fusion from the graveyard and add them to your hand. It’s a great and flexible card, allowing you to have multiple explosive Fusion turns one after the other.

Fusion Reserve reveals a Fusion Monster from your extra deck and adds one of the Fusion Material whose name is specified on that card. On top of that, you can add one Polymerization card from the graveyard to your hand. While early on it is a trade of one card for one, later on once you have used Polymerization, you’ll get two cards back for the cost of one, making it very efficient.

Performapal Trump Witch is a monster with multiple synergies that allow you to fit her in various decks. Its effect lets you Fusion Summon using monsters you control once per turn, essentially letting you contact Fusion (no spell needed) any Fusion Monster. If, however, you do not need that effect, you can tribute the card to add one Polymerization from the deck or graveyard to your hand.