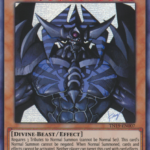 Egyptian God cards in Yu-Gi-Oh! are powerful, divine beings with strong abilities. As a result, only three have been printed over the history of the game. Some names might be familiar to you already, such as Ra, the God of the sun.

All three cards have the Divine-Beast tribe, allowing you to build a deck focused around them with ease. While more cards like this would be a welcome addition to the game, it’s currently unknown whether Konami has any plans to add them in the future.

Here are the best Egyptian God cards in Yu-Gi-Oh!.

The Winged Dragon of Ra is one of the strongest cards in the game, requiring three tributes to Normal Summon. The creature cannot be set like others, so your opponent will always know when you play it. On top of that, the Summon cannot be negated by any card effect, so you’re safe to tribute three creatures whenever you have the chance to put this on the board. While this Egyptian God card has no ATK/DEF by default, you can pay LP, so increase it by whatever amount you can pay. One tactic is to save 1,000 LP to destroy a defending monster on the field, then use the remaining LP to boost its stats to kill your opponent in one turn.

Obelisk the Tormentor requires three tributes to Normal Summon, just like other Egyptian God cards. Its Summon cannot be negated, and afterward, your opponent cannot activate cards or effects. The creature has 4,000 ATK/DEF by default, making it tough to deal with, considering that neither play can target it with card effects. He can be a great offensive creature or defensive creature since not many boards can deal with him. If you are playing him offensively, you can tribute two monsters during a turn to destroy all monsters your opponent controls and then kill him next turn.

Slifer the Sky Dragon requires three tributes to Normal Summon. Like the other cards, nothing negates it, and other cards and effects are ineffective during the turn. It gains 1,000 ATK/DEF per card in your hand, so if you have a wide hand, it’s going to be buffed up. On top of this powerful effect, he also reduces the ATK of your opponent’s creatures by 2,000 ATK and destroys them if their ATK gets reduced to 0. Combined with the high ATK/DEF, this effect makes Slifer one of the strongest cards in the game.