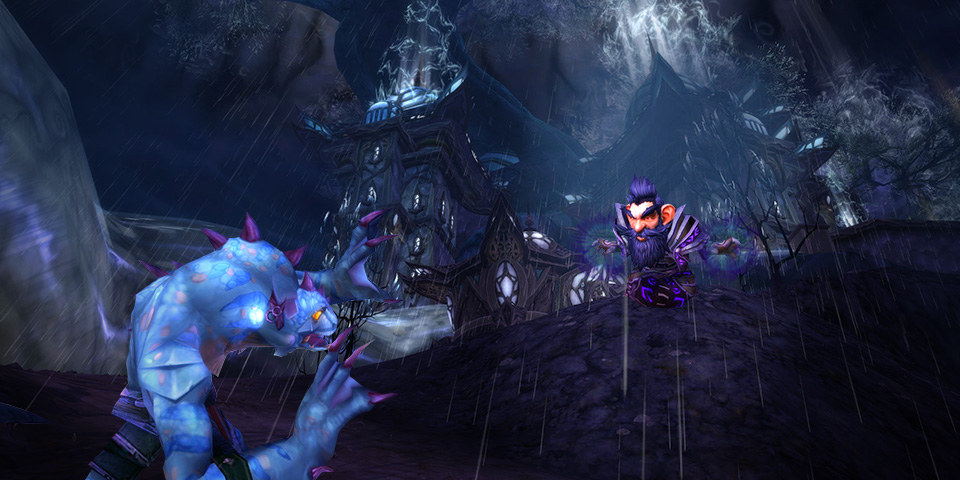 Demonology Warlock is one of the most intriguing classes in World of Warcraft: Shadowlands. Despite recent nerfs prior to the expansion, the ceiling on Demonology is incredibly high.

The core gameplay mechanics of Demonology Warlock boil down to standing in the backline of an encounter and commanding a practical army of demons to do your bidding and dish out unreasonable damage on your behalf. While there will certainly be moments where the class feels underwhelming in the mobility department, its intrigue and damage ceiling stand right alongside any class in the game.

With incredibly strong single-target damage and decent AoE cleave potential as well, Demonology Warlock stands out as an effective tool in both raids and Mythic+ dungeons. Here are the best talents and builds to use to get the most out of Demonology Warlock in Shadowlands.

Level 30: Burning Rush – Mobility options are everything when it comes to Warlock since the class doesn’t have a whole lot of them built into its standard kit. Taking a talent like Burning Rush, which gives you a temporary movement speed boost at the cost of your HP, is one of the best options Warlocks have for sustained mobility, especially in drawn-out encounters where they’ll need to get away from multiple threats.

Level 35: Summon Vilefiend – Summon Vilefiend is a strong DPS option that adds another minion to your arsenal. Stacking this summon with some of your other abilities that bring minions onto the battlefield—such as Nether Portal—gives the Vilefiend that much more potency.

Level 40: Mortal Coil – Mortal Coil isn’t the flashiest option at level 40, but it gets the job done. A three-second incapacitation can act as a pseudo-interrupt in almost any situation and the additional healing that you’ll receive from incapacitating a target is most certainly a welcome bonus to any encounter.

Level 45: Grimoire: Felguard – Grimoire: Felguard is hands down the most notable and recognizable talent Demonology players have at their disposal—and for good reason. The Felguard is perhaps the strongest demon that you’ll be summoning throughout the course of an encounter and the fact that several other talents will boost the demon’s damage makes it a must-have. While the other talents in this row are certainly appealing, this talent makes Demonology what it is. It adds so much recognizability and throughput to the spec in every scenario.

Level 50: Nether Portal – Nether Portal brings forth several minions from the void to fight on your behalf. Since you’ll be stacking Mastery as your primary stat, the demons that emerge from the Nether Portal should be hitting immensely hard, bringing a ton of DPS to the table every few minutes.

The most ideal covenant that Demonology Warlocks can join is Night Fae. Night Fae is perhaps the most accessible and versatile covenant in the game thanks to Soulshape. In the case of Warlocks, a full-blown blink with multiple charges on a 90-second cooldown is a huge boost to mobility for a class that’s usually glued to the ground.

Additionally, Night Fae’s class-focused ability for warlock, Soul Rot, is a solid source of sustained damage over time. While the ability doesn’t have the same level of synergy that it might on a specialization such as Affliction, Soul Rot still adds a whopping DoT spell to your rotation, giving you a dependable source of DPS every 60 seconds.

Mastery stands out as a priority stat because of the flat damage increase that your minions deal. With so many opportunities to summon minions, you’ll want to ensure that they’re not slouching about once they enter the fray. Additionally, when taking an investment-heavy talent like Nether Portal, which brings hard-hitting minions from the void every three minutes, you’ll want to ensure that they’re dealing as much DPS as possible while they’re in the mix.

Beyond Mastery, Haste is always a solid option for a caster class like Warlock. With spells like Shadow Bolt, Demonbolt and Hand of Gul’Dan being such a bread-and-butter part of the rotation, saving time casting them through Haste will always be favorable. Versatility and Critical Strike don’t bring as much throughput to the Demonology Warlock build as other stats, but they can be given a chance to shine on your character if there are no other viable options available.