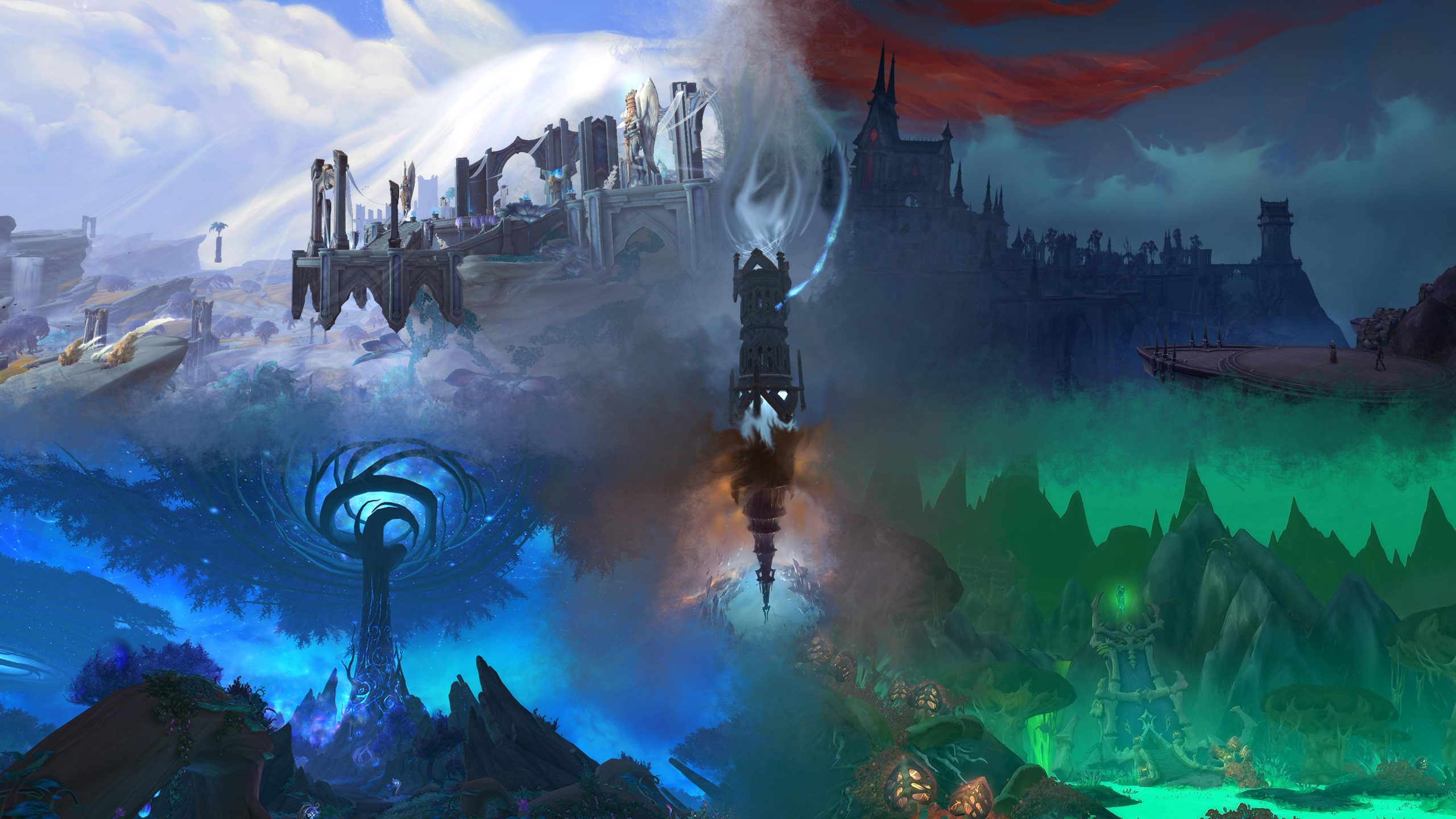 Druids are one of the most flexible classes in World of Warcraft: Shadowlands in both player-vs-player (PvP) and player-vs-environment (PvE) encounters. They are capable of fulfilling multiple roles such as healing, tanking, dealing damage from range or melee. Balance Druids made a name for themselves in both the PvP and PvE environments due to the high damage and utility they bring, making them a great pick if you want to play a ranged DPS.

In PvP, Balance Druids have the possibility to one-shot most classes during their offensive cooldowns while also providing one of the best offheals and crowd control (CC) in the game. They can easily peel for their teammates while being very hard to kill due to Bear form. In PvE, they are great damage dealers who need some time to ramp up in small fights due to the need to throw damage-over-time (DoT) effects on everyone. But during boss fights, they’ll be topping the charts.

Here are the best Balance Druid talents and build for PvP and PvE.

Balance Druids are in a great spot PvP-wise due to Cyclone, a spammable CC spell, as well as their huge burst damage and offhealing. You have a wide array of tools to deal with your opponents, making you a flexible teammate in arenas or rated battlegrounds. The biggest downside of this class and specialization is that you’re going to have to cast a lot, unlike other classes. Your DoTs generate resources and deal a decent amount of damage, but they aren’t enough on their own to pressure enemy teams. You’ll have to usually combine a DoT playstyle with hard-casting spells at your opponents, making you susceptible to interrupts.

Level 15: Nature’s Balance – This is the default choice since it generates resources needed to cast your burst regardless of what you’re doing. If you’re spamming CC or kiting your opponents, you’re going to passively generate Astral Power, making this the best choice by far. If you’re playing a bursty composition that wants to finish games quickly, Warrior of Elune would be a good alternative.

Level 25: Renewal – One of the best defensive talents in the entire tree, healing you for 30 percent of your maximum health without any amplification effects. This is good especially when used in Bear form since you’ll be getting more effective health due to having a higher pool in that form. It should be used in scenarios where your healer needs a break or is in CC and can’t heal you to survive for a couple of more seconds.

Level 30: Guardian Affinity – If you want to become unkillable, the Guardian Affinity is your friend. It reduces all damage taken by six percent and gives you access to defensive abilities in the Bear form, which makes you an unkillable machine. Even if you get trained down by the opponents and your healer can’t heal you at the time, it’s going to take a long time for your opponents to take you down. This affinity works well when combined with the Renewal talent.

Level 35: Mass Entanglement – This should be your go-to pick for most games since it synergizes well with Solar Beam. You can use this ability and instantly follow up with a Solar Beam on the opposing healer to give you free reign against the opposing team.

Level 40: Incarnation: Chosen of Elune – The bread and butter of every Balance druid, this talent created a lot of one-shot scenarios at the start of the expansion when players didn’t have a lot of gear to boost their survivability. With a higher health pool nowadays it’s harder to one-shot opponents, but it still remains a great offensive cooldown, increasing haste and critical strike chance for 30 seconds.

Level 45: Twin Moons – This talent saves some globals in applying Moonfire by having it spread to nearby enemies when thrown at the main target. It’s a great talent, especially against teams who are more than happy to spam dispel your DoTs.

Level 50: Fury of Elune – This row is quite versatile and depending on your other talent choices it can be changed. Fury of Elune works well with the other talents above, giving you a nice one-minute damaging cooldown on top of your existing burst.

With the fast-paced arena meta, you need to able to cast your spells as quickly as possible, and having a lot of Haste to do so is a requirement. But you should acquire a lot of Versatility before that. This stat will increase your damage and survivability, giving you more than enough time to recover if you get tunneled down. Mastery and Critical Strike are lower in priority, but if you have higher item-level gear with these stats, feel free to use them instead.

As for the Legendary item, you want to go for Timeworn Dreambinder because it allows you to get multiple Starsurges off in a small period of time, capable of bursting a target down from full health.

The optimal covenant for a Balance Druid in PvP is Night Fae. It grants you the ability which was the target of many nerfs, Convoke the Spirits. When combined with other offensive cooldowns, you can take down entire teams in the blink of an eye if you get lucky with your spells. On top of this amazing ability, you’ll also get access to Soulshape, a mobility spell to kite opponents.

Soulshape in PvP should only be used if you’re out of options. Save it for when you’ve made a mistake and the enemy caught up to you, then activate it to blink to a safe area and get your cooldowns. Due to its high cooldown, you should avoid using it offensively, unless you get a guaranteed kill.

The three PvP talents you should use by default are Moonkin Aura, Celestial Guardian, and Thorns. While the first one is offensive, the other two are defensive talents that will make you much harder to kill. Celestial Guardian in particular shouldn’t ever be taken off with the Guardian Affinity since it makes you as hard to kill as a tank.

Balance Druids in PvE provide a good source of damage, while also having a lot of utility tools to help the group or raid to deal with certain encounters. You’ll always find a dungeon or raid spot due to how flexible you are. While there are some weaknesses such as huge ramp-up time due to the DoTs, you’ll quickly overcome that weakness once you observe the number of benefits the class and specialization has.

Level 15: Nature’s Balance – This is the default choice since it generates resources needed to cast your burst regardless of what you’re doing. Resetting the Astral Power to 50 out of combat is also a nice addition, making you more prepared for the next fight.

Level 25: Wild Charge – Wild Charge is the best talent in the row to give you increased mobility on a 15-second cooldown. If you need some self-healing, go for Renewal instead.

Level 30: Restoration Affinity – Unlike PvP, you’re not going to get trained in PvE, so going for Restoration Affinity is much more useful to help your allies. You’ll be gaining access to a passive healing effect on top of Swiftmend, which can be quickly used to heal an ally from critical health to full in a second.

Level 35: Heart of the Wild – This is a powerful five-minute cooldown that can boost your power and be the difference between a wipe and a boss kill. It gives you 30 percent increasing healing while also reducing the cost of the healing spells by 50 percent, making this the best performing talent in the row.

Level 40: Starlord – This talent gives you easily up to 12 percent haste during encounters, making this very valuable the longer the fight goes. While it won’t be as impactful when clearing some adds, it will come in handy when you engage a raid or dungeon boss.

Level 45: Stellar Flare – This is the best talent to increase your damage against bosses, while others are more aimed at dealing with adds. Since you have plenty of tools to deal with those, picking this talent is better for longer fights.

Level 50: Solstice – For the first six seconds of Eclipse, you’ll be Shooting Stars 300 percent more often. It’s passively activated whenever you enter Eclipse, giving you time to use your globals on something else instead.

Unlike PvP, in PvE, you don’t need to stack up on Versatility. You benefit from all stats quite well, but Mastery is king in a PvE environment. It increases the damage of your spells directly without having to rely on RNG crits. Balance of All Things is your go-to Legendary since it has a 40 percent critical strike chance when you enter Eclipse.

The optimal covenant for a Balance Druid in PvE is Night Fae. It grants you Convoke the Spirits. When combined with other offensive cooldowns, you can take down huge groups of adds quickly or go through a boss phase unharmed. On top of it, you’ll get access to a great mobility spell in Soulshape. You can use it to quickly reposition yourself while your cooldowns come back.