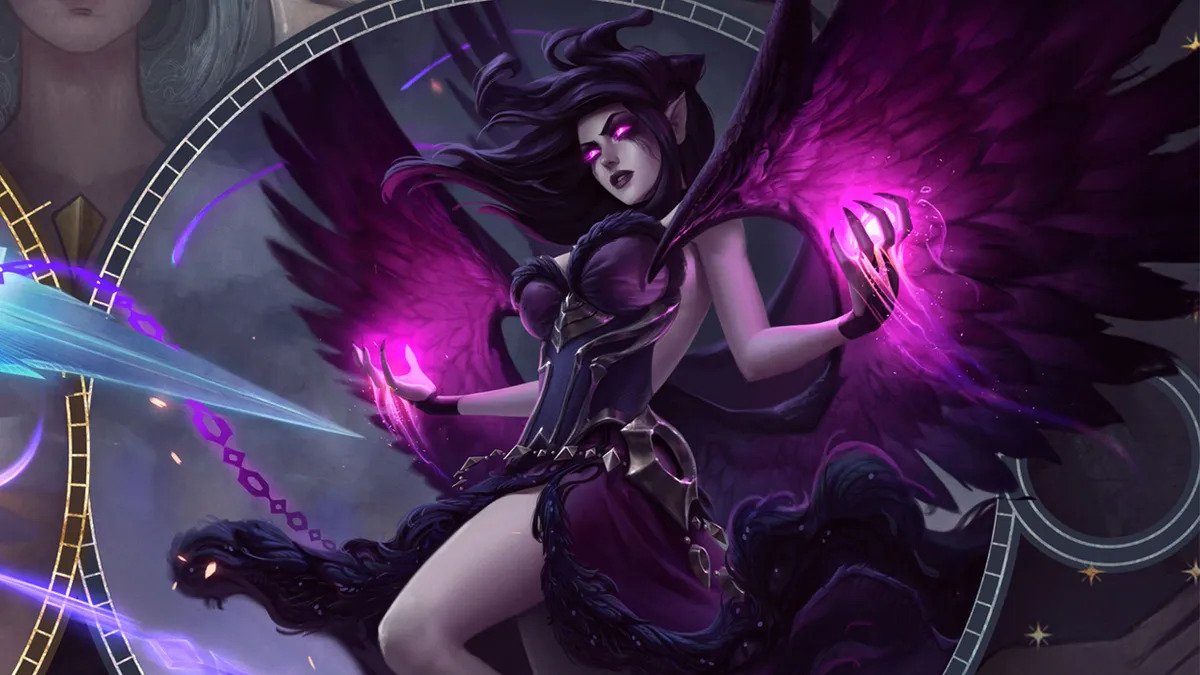 The wildly popular League of Legends only continued to gain popularity over time as the years passed and the player base grew. So much so that Riot Games developed its own mobile spin-off to the original game, named League of Legends: Wild Rift.

Wild Rift is very similar to the original game, carrying on a lot of the same elements from the PC version. This includes the roster from the original League of Legends. From those champions, today we will be highlighting one of them in particular: Morgana.

Morgana the Fallen is an AP Mage champion. Primarily played in the support role, Morgana is also quite capable of dishing out her own damage, making her a great Mid hero as well as a proficient jungler in her own right.

What makes Morgana so powerful are her skills. In the right hands, she is capable of dishing out a lot of damage while supporting her teammates:

The first two of her primary skills are great to combo with each other. While Dark Binding roots and holds an enemy in place, Tormented Shadow does the desired damage over time, with this combo being devastating throughout the early levels.

Her major defensive support capabilities come through her Black Shield skill, which not only negates magic damage but also disables. Her ultimate Soul Shackles offer further disable and also a reveal upon usage, ensuring that those pesky stealth champions can be caught.

She can be quite squishy, however. That problem can be alleviated through her passive Soul Siphon which keeps Morgana healed for every point of damage she dishes out, making her one of the tankier supports in the game.

A combination of these items brings out the best in Morgana, in any role:

This upgrade to her boots is arguably the best on Morgana. The Stasis ability is widely considered to be one of the best for a support, making them invulnerable and untargetable for the duration.

Liandry’s Torment combos well with her Dark Binding and Soul Shackles, dealing damage off max HP percentage and doubling that number while they are rooted or stunned with those abilities.

Rabadon’s Deathcap is just a flat power increase to Morgana by 40 percent. Nothing fancy there, just straight-up power spikes her upon acquiring it.

Rylai’s Crystal Scepter slows enemies with each damaging spell cast, of which Morgana has three. This ensures a disable even if the damage is felt without the debuff being placed.

Finally, the Void Staff completes this build by providing a whopping 40 percent magic penetration, further amplifying her skill damage along with Rabadon’s Deathcap, making for a very powerful secondary (or even primary) damage-dealing champion.

Morgana’s builds can be broken down into three primary builds:

Each of these builds excel in their own way.

This build focuses more on Morgana maxing out and prioritizing her Black Shield spell, maxing it out by level 7. Being a support, the most essential task would be keeping her allies alive and Black Shield does that extremely well.

This is followed up by maxing out Dark Binding next to ensure a setup for either Morgana or her damage-dealing allies to secure a kill. A guaranteed root also lets allies escape a sticky situation.

Finally to round it off, maxing out Tormented Shadow for follow-up damage in the later stages of the game completes this build. Soul Shackles are leveled up whenever possible.

This build focuses on Morgana being a primary damage dealer, which results in certain deviations from the Support build. To start off, we go the opposite route and max out Tormented Shadow first. The damage from this skill is consistent and since it hits enemies in an AOE, it’s great for damaging multiple foes.

Next, we go down the same path of maxing out Dark Binding, ensuring a root setup for Tormented Shadow, making enemies stay in the pool longer and die faster. This combos well with Soul Shackles, ensuring a follow-up stun.

Black Shield is maxed out last, which would make players think this build feels like too much of a glass cannon, but Morgana’s Soul Siphon passive will make sure that all of the damage she dishes out also keeps her alive. Soul Shackles are leveled up whenever possible.

This build is not quite as straightforward, the priority for skill build is split evenly between Dark Binding and Tormented Shadow, ensuring a good mix of both damage and disables.

One value point of Black Shield is taken before level 10, ideally, but maybe sooner if there is a need to fall back on being a little more defensive than normal. Black Shield is still maxed out last in this build as well.

Soul Shackles are leveled up whenever possible.