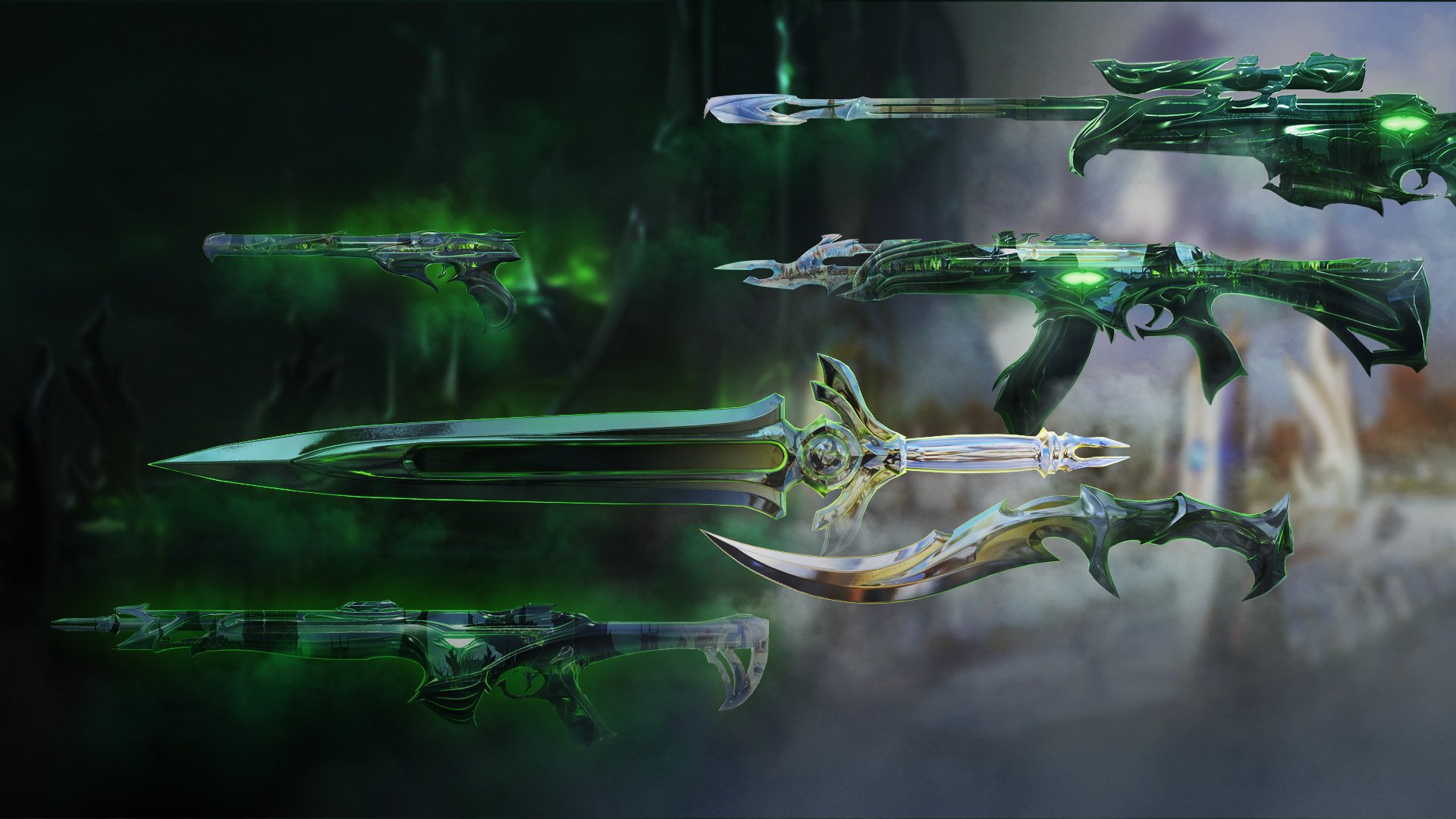 Hot on the trails of the newly-released Forsaken skins, Riot is once again expanding on VALORANT’s weapon lore with the upcoming Tethered Realms bundle.

The new skin line, which will debut on May 26, plays on those familiar thematics of good vs. evil seen in the already-existing Forsaken and Sovereign cosmetics. Tethered Realms uses the same shader method seen in Winterwunderland, transitioning between two different scenes whenever you go from sunlight to shade on a map. And the bundle will include a dual-wield melee weapon for the first time, along with the Vandal, Operator, Guardian, and Ghost.

“We wanted to depict two identical worlds: one divine and one corrupt, taking inspirations from IPs like Diablo or Darksiders, and even Destiny, in the way they play with Light and Darkness,” premium content art lead Sean Marino said. “One thrives in a universe where the world is bright and the people are righteous, and in the other, the world is dark and the people have become corrupt.”

Riot initially wanted to play on this juxtaposition by working the Sovereign and Forsaken themes into a single skin, but that proved to be a “technical nightmare,” according to Marino. So instead, the devs pivoted to the “greenscreen” type cosmetics that still pay homage to Sovereign and Forsaken weapon models but offer an interesting twist with moving textures and a new melee type.

The skins fall into the Premium Edition tier and will likely cost 7,100 VP for the set or 1,775 VP a piece. Snagging the Prosperity and Demise melees on their own will probably cost 3,550 VP, unless Riot ups the price since you’re getting two different weapons. Level one of the melee is the Sovereign Sword with custom moving textures, but players can upgrade it with Radianite to add on the Forsaken Ritual Dagger, too.

“We hope that players really enjoy this type of skin because it gives us opportunities to expand on the lore we create for our different thematic fantasies,” Marino said. “We’ve only just started to show the full lore and fantasy of a skin through the player cards, and skins like these allow us to dive deeper.”

Riot also discussed the new Minima skins today in an exclusive interview with YouTuber aSmoogl, a minimalist bundle that includes the Phantom, Spectre, Operator, Ares, and Sheriff. “Less is more” is the theme of this skin line, with the cosmetics offering subtle, yet deliberate, design choices. The Phantom doesn’t have a scope on the model, for example, but one does project when you go into ADS mode. And the Operator has a square scope, the first time Riot has done that for the sniper.

“It was definitely a tough challenge because we had to figure out how much is too much and how little is too little,” Riot said. “Trying to find that nice balance between overdesigning versus keeping what’s enough in here.”

Minima falls into the Deluxe Edition price tier, which will be 1,275 VP a piece or 4,270 for the bundle. It doesn’t include a melee or any player cards, so you’ll just be paying for the five skins.