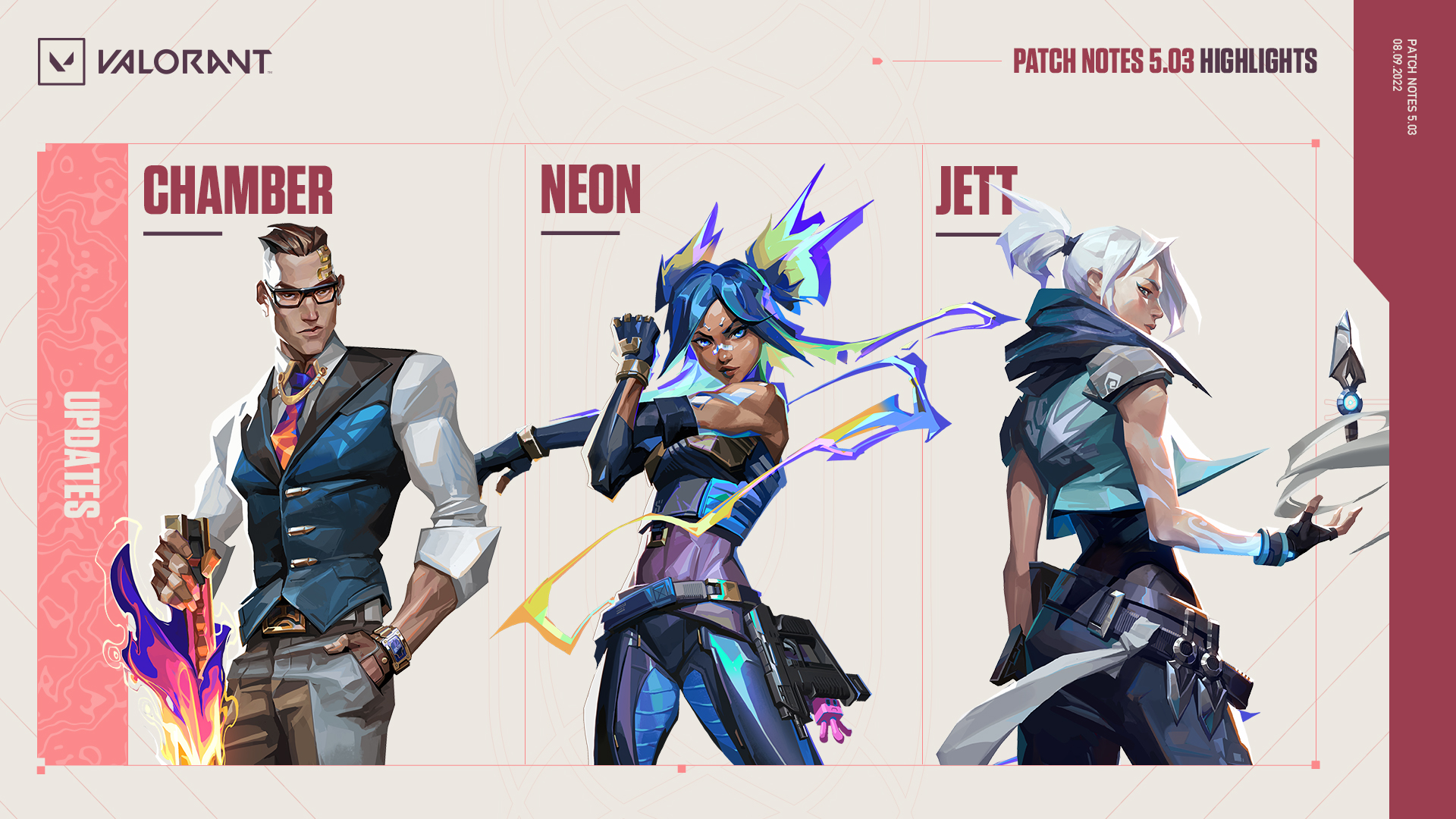 A new VALORANT patch is set to hit the live servers today. Patch 5.03 comes after a programmed delay of updates as the developers needed more time to update the game engine and work on balancing agents like Chamber, Neon, and Jett.

VALORANT‘s engine has been updated to Unreal Engine 4.26, which will “improve the tool set” available for the developers in “many ways.” This change will likely go unnoticed by most players, but Riot Games has warned beforehand that it is aware of some issues with the game’s UI. The devs are working on fixing it as quickly as possible, but players may experience some “funkiness” in the game and in the main menu.

As for agent changes, the most noticeable balance update is how Chamber will work moving forward. The French sentinel has been substantially nerfed because his strengths have started to overshadow his weaknesses, according to Riot. The developers most notably increased the base cooldown and recall cooldown of the Rendevouz ability, reduced the slow of the Trademark ability, reduced the slow of his Ultimate Tour De Force, and increased the Ultimate Points required to activate Tour de Force.

In addition to the Chamber nerfs, Riot has also tweaked the ultimates of Neon and Jett, while fixing bugs that were happening with Jett, Reyna, and Killjoy. As usual, the developers shipped some general qualify of life updates in this latest patch as well.

Here are the full notes for VALORANT Patch 5.03.

As players in both ranked and pro play have mastered Chamber, his strengths have started to overshadow his weaknesses, making the counterplay to Rendezvous and his arsenal not as effective as Riot hoped. Chamber’s overall strength has also felt outsized, and the devs believe that they can reduce the complete power of his kit while still keeping him competitive with the rest of the roster.

The devs are updating the ultimates for the following Agent so that they follow similar regional damage rules to our weapons—where hitting the head and legs of an enemy applies different damage multipliers. The intent is to reward precision and create intuitive consistency across damage in VALORANT.

For Neon specifically, it also gives the devs more tuning levers for balancing her across different skill levels. This change should also add depth to the mastery needed when tracking while sprinting that her ult demands.

⦁ Fixed an issue with Jett’s Tailwind where switching weapons in the middle of the dash would cause the weapon pull-out animation to take longer than desired.