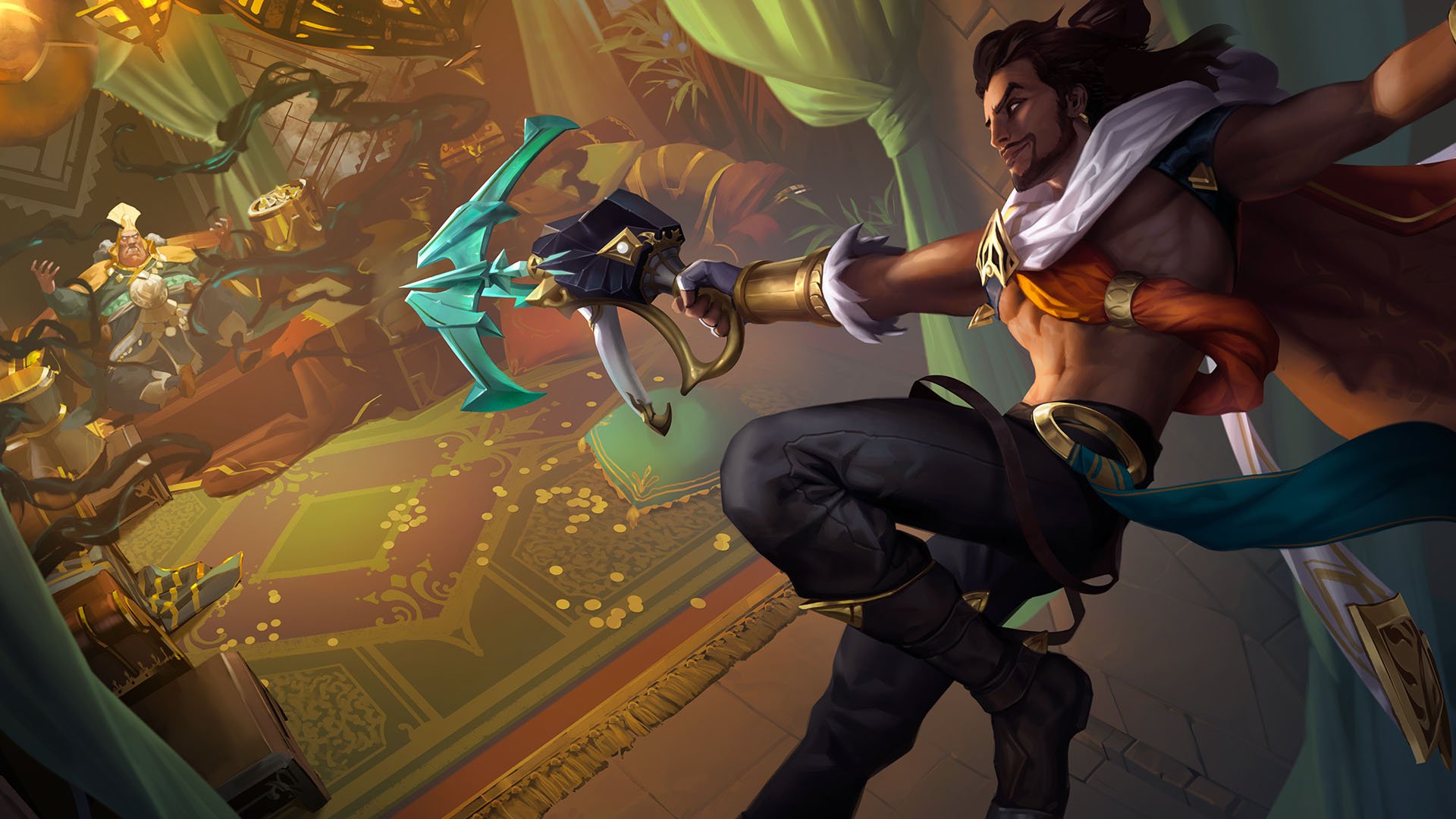 With the recent introduction of Teamfight Tactics Set 5.5, League of Legends‘ very own Scoundrel slayer joined TFT‘s cast of champions and has since become a game-changing powerhouse.

Akshan is the premier carry for both the Sentinel and Ranger traits. His strength is so high, that he can even be played without any synergies for a late-game power spike.

Akshan’s basic attacks deal 80/144/259 damage at one-star, two-star and then three-star respectively, making him one of the deadliest on-hit champs.

But his true power lies in his ability, the Heroic Swing, where Akshan will leap and then swing away from enemies before landing to reset his armor penetration and Attack Speed bonuses. During the swing, Akshan is untargetable and will attack at double speed.

The scaling of his ultimate ability occurs in the moments after he lands from a swing at one-star / two-star / three-star:

Despite only having two traits assigned to his character, Akshan has a phenomenal mix of defensive and offensive statistics coming from his Sentinel and Ranger traits.

Because Akshan is found relatively late into each game, it can be difficult to force him into your composition as a carry in every game. The best point of the game to decide to run Akshan is after forming a strong Ranger or Sentinel early game. It is essential that the player hits level eight or nine with plenty of health remaining to roll for all the high-cost units that are run in this composition.

An early game composition that will pivot into Akshan carry later on might look something like this:

The two compositions that are shown in this guide can both stem from a similar early game build. For a stronger board, players can place their late-game Akshan items on a stronger unit than Vayne but will need to sell them and then re-roll for that unit later on to be able to still fit in four Rangers.

These builds prioritize his survivability by using his Sentinel shielding, which will allow him to use his ultimate Heroic Swing multiple times, cleaning up the fight and staying healthy in the process.

Akshan’s kit features inherent Attack Speed multipliers as well as further Attack Speed from the Ranger trait, meaning any items that can be built from a Recurve Bow may be a little bit redundant. Deathblade and Bloodthirster are great offensive Attack Damage items, but any B.F Sword items can work.

The key difference in this build compared to many others is the use of Spear of Shojin in the third item slot. This item synergizes so well with his Attack Speed multipliers, meaning he will be flinging himself around the battlefield cleaning up the opposition.

With an attack range of just three, which is on the lower side for most ranged carries, Akshan requires being positioned a little closer to the action so he can immediately begin auto-attacking and building toward his ultimate. This also keeps him out of the way of any potential assassin comps taking him out before he can make his mark on the fight.

Playing both Senna and Ashe will add great Crowd Control to the team composition and placing them on opposite sides to each other will create two angles of CC instead of just one, should they be placed together.

Starting with a similar early game team, this version of Akshan still utilizes the Sentinel shields, but focuses more on his incredible damage output as the team’s single win condition.

What this build does have over the six Sentinel variants is a slightly higher ceiling. If the player is on a particularly long win streak or was able to successfully build a large enough gold bank from playing Draconic, this build allows players some extra compositional room for utility units like Gwen and Garen. Gwen can act as a great item holder of Zeke’s Herald and other utility items.

Because this build focuses on damage and allows for utility units that can help Akshan stay alive, he can prioritize damage items over everything else. In this instance, he can do the Spear of Shojin for something like a Giantslayer.