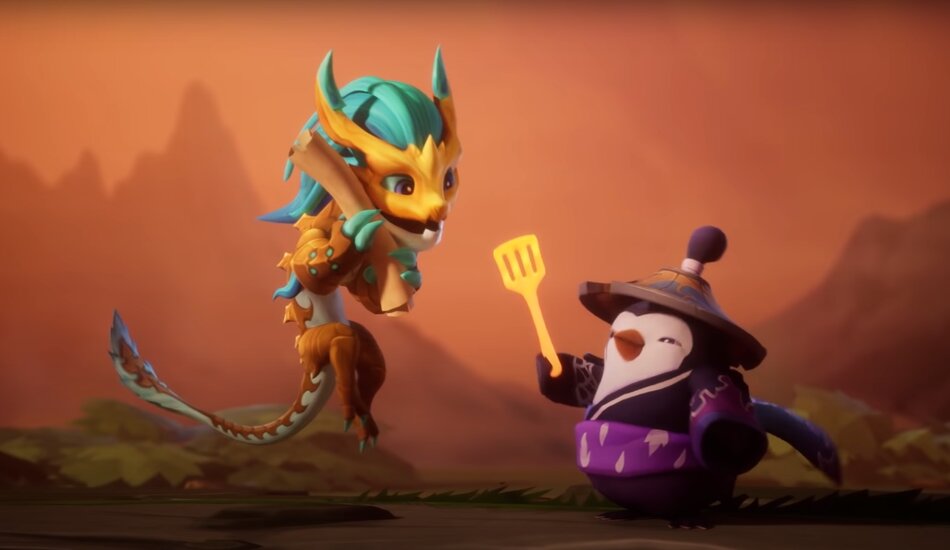 The gigantic set features new champions and traits, along with the Shadow mechanic, new Armory shops, and the game’s first lab, Hyper Roll. Reckoning, according to the devs, brings players “more dynamic moments” to highlight their decision-making “like never before.”

The set also includes a new ranked season, as always, with new items and units that “deepen positional play” and traits that bring “unprecedented flexibility.”

But there’s more. Players will be able to flaunt their style and show off to their opponents with three new Little Legends, a Splash Party Arena, and more.

Here are some highlights from the new 1295 RP Pass+ during TFT: Reckoning. As with past passes, you’ll get rewards for gathering XP. But to unlock all the exclusives listed below, you’ll have to upgrade to the Pass+.

Do you want to add a mystical mer-mage to your party? Look no further. Dowsie can adapt to nearly all surroundings, so you’ll have to lure them out.

Fenroar are fiercely loyal warriors. But don’t let the sword intimidate you. They become eternally bound to their Puproar as well as their friends, which they make quite easily after a round or two of fetch the orbs.

A cunning master of speed, traps, and thievery, Nimblefoot quickly turns any journey into a mischievous misadventure.

It’s here, TFT’s first official Lab, Hyper Roll, where you can roll faster and harder than a three-star Dango.

Shadow Items are the new set mechanic. You can read about them in detail here.

The Armory isn’t exclusive to Reckoning, but it’s making its debut here. It’s core to Hyper Roll and it’ll likely stick around for TFT’s future.

The Armory is a pop-up shop where you select an item from a couple of options as you would a champion. These items are free, but you can only take one per Armory. You can, and often should, pick up Shadow components here.

In previous sets, if you put a lot of tanky items on a character, they become more efficient at generating mana. Now, stacking defensive items won’t allow you to generate wild amounts of mana. But it’ll still be good.

Some ability terms and interactions are being updated for consistency.

If you own a copy of a champion, cards of the same champion will glow in your shops.

The devs have cut a few seconds out of moments where you’re not doing much to allow for more playtime and less “dead” time. This is especially important because the devs are adding time onto a few stages with the new Armory system.

The devs have added a new tiebreaker, which kicks in if players are still tied after the first two tiebreakers (negative health and health prior to elimination). The new tiebreaker is “won a round more recently.”

The player who won a round more recently in a situation where multiple players are eliminated with the same health prior to elimination will finish ahead of the other.

Most base stats for component items and the completed items they produce have been reduced. This will slow down the power ramp that champions experience when getting their items.