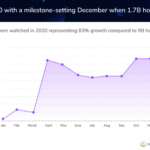 This results in Twitch seeing an 83-percent growth in hours watched in 2020 while Facebook Gaming saw an increase of 166 percent year-over-year, largely because of the COVID-19 pandemic keeping people at home.

And while Mixer might have shut down in July, DLive has shown promising signs as another growing platform for streamers. The newer option jumped from 9.7 million hours watched in Q1 all the way to 17 million in Q2 before stabilizing at around the 15 million mark throughout the rest of 2020.

For Twitch, various new games managed to crack the top 10 categories on the platform every month. But only one new game stuck: VALORANT.

VALORANT placed fifth on the overall rankings for yearly category watch time but brought in the highest peak of the year, surpassing even Just Chatting. That peak came when the game was still only available to a limited number of players, hitting 334 million hours watched in April, largely because there were thousands of players trying to get a code for the game from Twitch drops.

Here are the top 10 categories by yearly watch time on Twitch during 2020.

When talking about December on its own, Cyberpunk 2077 and Escape from Tarkov both jumped into the top 10 categories. Tarkov saw a 193-percent growth in viewership to make it back to the top.