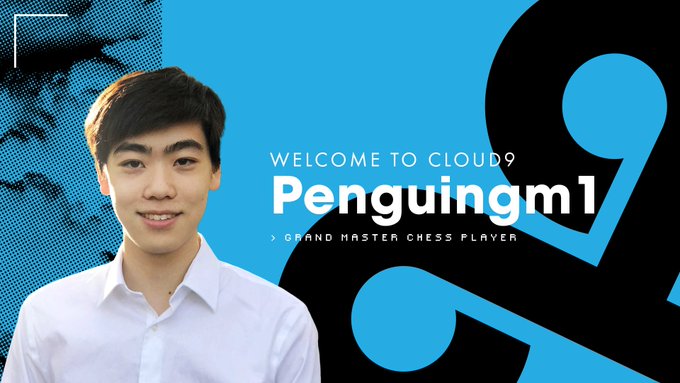 With this move, C9 has joined the latest trend of esports organizations signing high-level chess players. At the tender age of 20, Penguingm1 is already one of the best hyperbullet and ultrabullet chess players in the world.

“A three-time national champion, penguingm1 is also a Top 5 bullet player, having won hundreds of games against Magnus Carlsen, the current World Chess Champion,” Cloud9 said in a press release. “By the age of 18, penguingm1 had already achieved the rank of grandmaster, as recognized by the International Chess Federation. If that wasn’t enough, penguingm1 also earned the #1 ultrabullet rank on lichess while playing blindfolded.“

In addition to those impressive credentials, Penguingm1 is the most recent player to defeat the legendary Leela Chess Zero neural network chess engine. You can watch him play chess live on his Twitch stream.

TSM made a huge splash in the chess world in August by signing five-time U.S. chess champion Hikaru Nakamura. This decision sparked a conversation about whether chess is an esports.

Upon a cursory analysis of the question, there’s no clear reason why online chess is substantively different than online strategic games like Teamfight Tactics or Hearthstone. After all, TFT is classified as auto chess. Although chess may predate electricity by over a thousand years, it appears to meet the qualifications to be an esport just as much as other games that can be played offline or online, like Magic: The Gathering.

The chess category on Twitch has nearly one million followers and typically has over 10,000 people watching at any given time. As more esports teams sign chess players, those numbers will likely grow.