The crewmates in Among Us can win in one of two different ways: either they identify and expel all the imposters, or they complete all their assigned tasks.

At the start of each Among Us round, every crew member has a certain number of tasks to complete. When all crew members have completed their tasks, the imposters lose. Although crewmates likely won’t have enough time to finish all their tasks before the imposters take them out, that doesn’t mean tasks are useless. Visual tasks can help you prove your own innocence or discover the innocence of a fellow crew member since imposters cannot complete tasks.

A visual task provides some sort of visual indicator of its completion, which can be seen by other players. If a crewmate finishes the visual task and you see the associated effect, then they cannot be the imposter. Although most maps have different visual tasks available, The Skeld has the most visual tasks of any map in the game, while The Airship doesn’t feature any visual tasks.

Here is every visual objective in Among Us.

This task is available in the Weapons bay area on The Skeld and Polus. Once started, this task will take players to a green screen where they must destroy 20 asteroids by clicking on them. When a player is in the process of completing this task, other players will be able to notice missiles firing outside the ship in the Weapons area, proving that the player is indeed completing the task and thus clearing them of being an imposter. Although this objective is also available on Mira HQ, it is located on the Balcony on that map and brings no visual proof with it. 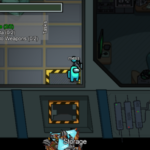 Empty Garbage appears on all three maps, but only includes a visual component for The Skeld. On The Skeld, this task is located in the Cafeteria and Storage areas of the ship. Players must simply pull and hold down a lever to complete the elements of this objective.

The player must first empty the garbage in the Cafeteria, which has no visual effect associated with it, then empty the trash from Storage, which will show the garbage being launched into space. Any player who is there to witness the completion of the task can rest assured that the crewmate who completed it was not an imposter.

Empty Chute only appears on The Skeld. The objectives are located in the O2 and Storage areas of the map. Similarly to Empty Garbage, Empty Chute requires players to pull and hold down two different levers to empty a chute of trash into space. When this task is completed in Storage, players can once again see the trash emptied out into space, providing evidence that the player did indeed complete the task.

Prime Shields is featured on The Skeld. The task is located in the Shields area of the ship and requires players to press all the red hexagons on an interface to turn them white. Once all seven hexagons are white, the task is complete.

Submit Scan is available on all three Among Us maps. On The Skeld and Mira HQ, this is a long task located in MedBay, while on Polus it is a short task available in Laboratory. The task requires players to stand on top of a scanner, which then scans the player for just over 10 seconds. While completing the task, a hologram of the player model will appear, which can be seen by other players and demonstrate the innocence of the scanned crewmate.

These visual tasks can help players discover who to trust in Among Us. Knowing the visual tasks can be crucial to your crew’s success, whether you are trying to prove your own innocence, or ascertain the innocence of another player.