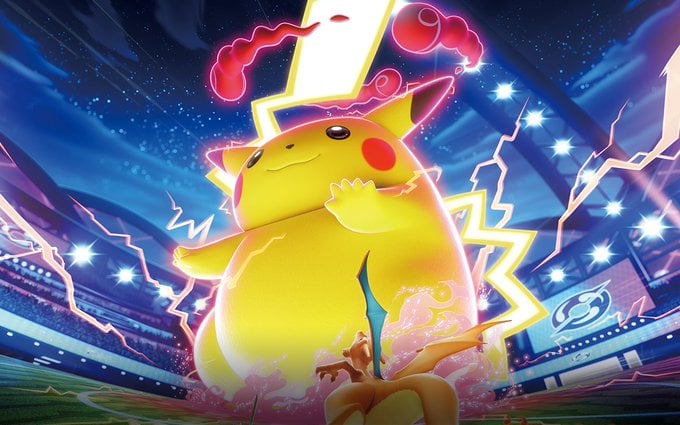 VMAX cards are a new mechanic added to the Pokémon Trading Card Game with the inclusion of Pokémon from the Sword and Shield franchise.

The new card archetype represents the new Dynamax and Gigantamax features in the games. When paired with specific V cards, Pokemon transform into their gigantic forms.

There are only a handful of these cards currently in the game, and of those cards, only a fraction of them stand out as some of the best and most powerful.

You have to start big with a list like this and there is no bigger or more expensive VMAX card than Charizard right now.

While it might not be one of the better cards to play in an actual match, it holds its own as a highly sought-after collector’s item that any VMAX hunter will want to find.

Despite lower-than-average HP for a VMAX card, VMAX Lapras makes up for it in her big attack. A three cost 90 DMF G-Max Pump attack might not look like much, but attaching multiple Water Energy to this card will deal that much more damage.

Keep stacking Water Energy and sooner or later you have a card that can one-shot any Pokémon in the game.

By itself it’s an average card with decent health that can deal a bit of damage for very minimal energy consumption. If you link it with a Grass-type or Poison-type team that can inflict Poison damage to foes, you can get the extra damage off of its move and turn an already good card into a game-winner.

Arguably one of the weaker VMAX cards on offer, VMAX Dragapult’s strengths lie in its weaker retreat cost and its ability to deal damage to the opponent’s backline.

Dragapult is an easy way to steal a win and take advantage of a foe’s weakened backline Pokémon. See a couple of Pokémon only 20 or 30 damage from being defeated? Throw VMAX Dragapult into the ring and take the victory.

It’s a Pikachu, so we needed to put this on the list.

As a self-destruct card if you will, V-Max Pikachu can do 120 damage by default, or if you are sure on the win, you can discard all energy from this Pokémon to deal an additional 150 Damage. Not bad if you want to take on a Pokémon that has been causing you issues all game.