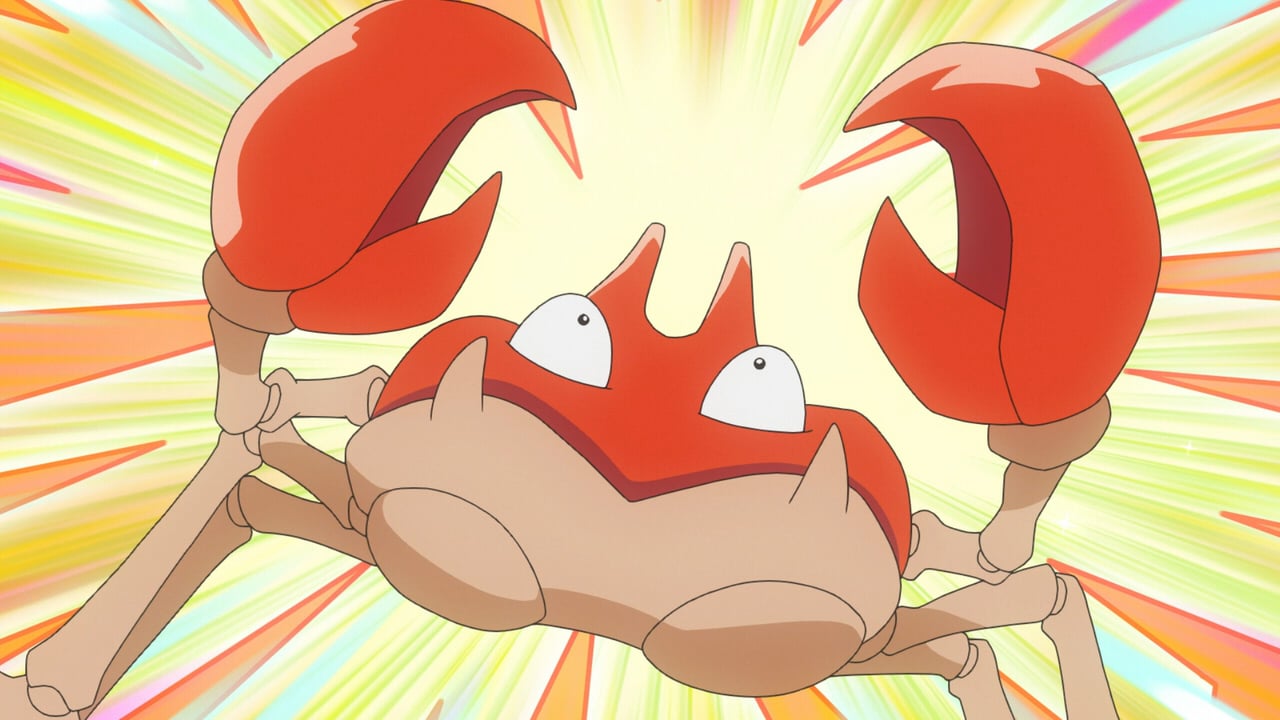 While Pokémon may seem like a fantasy world, many of its inhabitants are based on animals found here on earth. Pokémon’s designers have been inspired by bears, birds, fish, trees, flowers, and yes, even crabs. With so many Pokémon now available, the dev team has had to get creative with their design sources.

Crab Pokémon have appeared in the series over the years, mostly on beaches and in the ocean. Some of them are water-types, while others eschew that obvious type for something more creative. Some attack with claws; others fight with fists or special abilities. All of them are, undeniably, crabs.

Right off the bat, Crabrawler bucks the water-type trend among crab Pokémon. As you might have guessed from its name, it’s a fighting-type that enjoys close combat. Its curved claws are shaped like boxing gloves, and its left eyelid looks almost like a black eye, giving the impression that it’s been in more than a few fights. While it evolves into another crab-like Pokémon, Crabominable, Crabrawler has more of that classic crab look, which allows it to squeak onto the bottom of our list.

Clauncher looks more like a shrimp than a crab, but we’ll let it slide because of its large crab-like claws and hard crustacean body. This pure water-type evolves into Clawitzer, but like Crabrawler, it wins out over its evolved form thanks to its more classic crab form. Clauncher’s stats aren’t great, but it can learn plenty of great moves, including Sludge Bomb and Iron Tail, to take care of Pokémon that may give it trouble.

Crustle takes its cues from hermit crabs: known as the Stone Home Pokémon, it carries its entire sediment-laden home on its back wherever it goes. Both Crustle and its pre-evolution Dwebble are bug and rock-type creatures, thanks to the rocks in which they live. Crustle shares its bug typing with Paras and Parasect, two classic crab Pokémon that rare further down this list. Like most rock-types, it has a high defense, but its speed and special stats leave something to be desired.

Kabuto is one of the oldest Pokémon in the series, both in the real world and in the games’ lore. This water and rock-type was part of the original 151 Pokémon in Red, Blue, and Green. Players need to revive it from a Dome Fossil to get it, implying that it is an ancient dweller of the Pokémon world. Its horseshoe crab appearance and glowing red eyes make it one of the creepier crab Pokémon you’ll come across, but its powerful evolved form is worth the trouble.

Corphish looks like something you’d actually see on a beach. It seems to be a cross between a crab and a lobster, complete with that classic red coloring that’s so common for crab Pokémon. Both it and its evolution Crawdaunt can learn the powerful water-type move Crabhammer, which has a high damage number and a high critical hit rate. Thanks to that power, Corphish skates in at number six on our list.

Crawdaunt comes above Corphish primarily because of its extra power and dual typing. While Corphish is a pure water-type, Crawdaunt is a water and dark-type, giving it additional power against a wider variety of types—as well as a few extra weaknesses. It can also learn Crabhammer, which is a serious threat to any type that’s weak to water. Crawdaunt has higher stats and a more intimidating look than its predecessor, making it a better choice in most cases.

Parasect enjoyed a lot more power in Generation I than it does today. In addition to being a crab, it’s a bug and grass dual-type. Back in Gen I, bug-type moves was the only thing that was super effective on powerful psychic-types, making Paras an appealing choice for early players. Nowadays, psychics are a lot weaker than they used to be, so bug-types aren’t the only way to counter those tough opponents. Even so, Parasect is a fun, classic crab Pokémon.

While Parasect may have better stats and more move possibilities than Paras, the truth is that Paras is the better-looking of the two. Parasect’s glassy eyes and large mushroom back give the impression of a dangerous creature, but Paras looks like a strange little bug you’d find in the grass behind your house. His tiny mushrooms are more endearing than creepy, and his big eyes seem at least a little friendly. The concept of a grass crab is a little strange, but then again, aren’t most Pokémon strange?

Kingler is one of the earliest and most standard crab Pokémon. It’s hard to look at it and think of any inspiration besides “crab.” Before Generation III, the powerful water-type move Crabhammer was exclusive to the Krabby-Kingler line, giving it some extra strength. Kingler also has a Gigantamax form in Pokémon Sword and Shield, which provides it with an epic beard and the biggest crab pincers the Pokémon world has ever seen. All of this combined is almost enough to give Kingler our top spot… but not quite.

Where would we be without Krabby? This is the crab Pokémon that started it all: the quintessential and purest form of crab within the Pokémon games. Krabby is small, cute, and not all that difficult to find–it can be found in just about every single main-series Pokémon game to date, speaking to the ubiquity of crabs in Pokémon. It can learn Crabhammer, too, which is a bonus—unless you’re facing one while using a fire-type first partner Pokémon. Overall, you can’t go wrong with one of Pokémon‘s most iconic crabs.