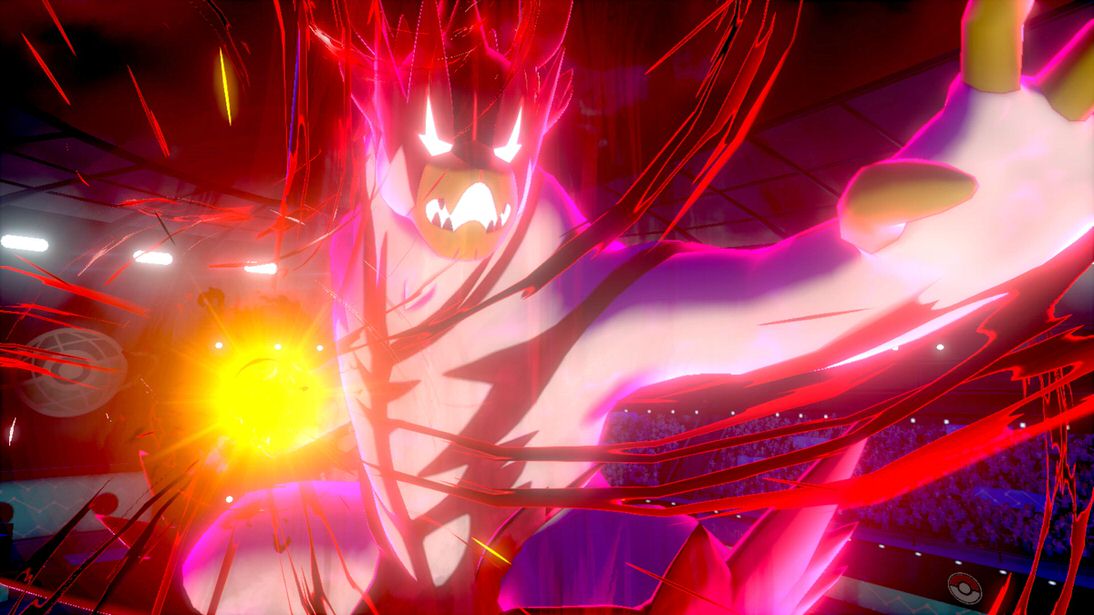 Pokémon Sword and Shield had a strong entry into the Video Game Championships (VGC) series in 2020. Despite the cancelation of the World Championships 2020, monthly online tournaments and the addition of the Players Cups that showcased the best trainers around the world kept the competitive spirit up throughout the year.

As we close the year with the Players Cup 3 on the horizon, we’re taking a look back at some of  the strongest (and most irritating) Pokémon that dominated the VGC format in 2020.

Without a doubt, Togekiss stands out as one of the most oppressive Pokémon in all of VCG 2020. The Jubilee Pokémon may appear to be warm and welcoming, but its access to attacking and support moves of numerous types quickly made it the most-used Pokémon in the format for more than half of the year. Prior to the release of the Crown Tundra expansion, Togekiss sat at a 41.15-percent usage rate, being bested by only Incineroar.

Togekiss was also not restricted to any one specific build, as it has access to both the Serene Grace and Super Luck abilities, making it difficult to know exactly what tricks this Fairy/Flying-type Pokémon would have up its wings. Its monstrous Special Attack and Special Defense stats, on top of access to moves like Follow Me, Thunder Wave, and Air Slash, made it a difficult opponent to overcome.

Togekiss also dominated the first Players Cup, appearing on 10 of the 13 players’ teams and leading Santino Tarquinio to victory. Although the new additions through the Isle of Armor and Crown Tundra DLC packs have seen other picks rise in favor of Togekiss, there’s no denying that this powerful Pokémon leads many trainers to victory.

The addition of move tutors in the Isle of Armor expansion brought a new life to many Pokémon, but none saw benefits greater than Rillaboom.

The final evolution of the Galar starter Pokémon Grookey has already boasted an impressive stat spread, yet its limited movepool and sole access to the Overgrow ability made it difficult for the Drummer Pokémon to shine. Then Grassy Glide was introduced into the game, and everything changed.

Grassy Glide is a powerful physical Grass-type move that goes first when used on Grassy Terrain. And with newfound access to the Grassy Surge ability, enabling Grassy Terrain to be applied upon entry, Rillaboom could combine this powerful priority move with its massive Attack stat and become an absolute monster in the format.

Rillaboom also gained a Gigantamax form in the Isle of Armor expansion, with access to the move G-Max Drum Solo, which attacks the target regardless of their ability. Although not as favored as the Grassy Terrain and Grassy Glide combo, this provided Rillaboom with the tools it needed to stand out among the competition.

With a 41.15-percent pick rate prior to the Crown Tundra expansion and a continuous presence now, Rillaboom will likely continue to outperform those that witness its drum solo.

The mad Alolan cat is back, in all of its fiery, Intimidate-y glory.

Following complete and utter domination of the VGC format in Pokémon Ultra Sun and Ultra Moon, Incineroar’s reintroduction into Sword and Shield immediately rose it to the top of the VGC win and usage charts, as all of the strategies that had previously made it oppressive were made even stronger.

Incineroar’s access to the Intimidate ability, a solid attacking and defending stat spread, as well as moves such as Fake Out, Snarl, and Flare Blitz make it a good fit for almost any team. Its ability to completely deny damage and simultaneously destroy teams was made even stronger with the addition of the move Parting Shot to its movepool, a move that enables Incineroar to lower its target’s Attack and Special Attack stats then immediately switch out for another Pokémon. It could then be switched back out to reimplement the effects of its Intimidate ability, then repeat the cycle.

Although Incineroar no longer has access to Z-moves, items such as the Assault Vest, Figy Berry, and Sitrus Berry allow it to sustain itself and not need much support from its partner Pokémon. But when it is placed alongside Pokémon that can strengthen its already impressive powers (like Togekiss), it becomes an indestructible wall that will not back down until it achieves victory.

For more than three years, Incineroar has been the bane of the existence of so many VGC players—and without a doubt, it will continue to shine into the VGC 2021 format.

You cannot talk about one of these dangerous Pokémon without mentioning the other two.

Weather wars returned in Sword and Shield, and for the first time since the VGC format in Pokémon Black and White, sandstorm-centered teams reigned supreme.

Tyranitar, the premiere establisher of sandstorms through the use of its Sand Stream ability, became an incredibly dominant force as players realized how efficiently it could utilize the Dynamax factor. When given the Weakness Policy item, which raises its Attack and Special Attack stats by two when hit by a super effective move, Tyranitar became a tank and powerful source of damage at the same time.

Excadrill was a Pokémon commonly partnered with Tyranitar, since it flourishes in sandstorms. It has access to three great abilities: Mold Breaker that negates all opponent’s abilities; Sand Rush that doubles its speed in a sandstorm; and Sand Force that increases the power of its Rock, Steel, and Ground-type moves by 30 percent. Although all of the abilities found their uses, it was Sand Rush that made Excadrill capable of destroying teams by itself.

With a monstrous Attack stat and impressive Speed stat that would now be doubled in the sandstorm, Excadrill could sweep teams without breaking a sweat. And if it couldn’t do it alone, Tyranitar would almost always be alongside it, there to get rid of any crumbs that may have been left over. But there was one more looming force that made this combo a true nightmare to face: Rhyperior.

Known as being a massively defensive Pokémon, seeing Rhyperior take advantage of the Dynamax factor was no shock to trainers early this year. But what made it stand out was its Solid Rock ability, which lowers the power of super effective moves used against it. Coupled with a Pokémon like Tyranitar, it would also gain a Special Defense boost from the sandstorm to make it even more tanky.

When coupled with a Weakness Policy, Rhyperior did Tyranitar’s job but better, as although its Rock/Ground typing made it four-times weak to common Water and Grass types, it would very rarely be defeated in one punch. This made retaliation all the much sweeter, leading its powerful Max Rockfall to bring many players to defeat.

It would be a disservice to not mention one of the most dominant combos in the destructive Trick Room teams.

Both of these Pokémon were introduced in the Galar region and were quickly noted by competitive players for their unique synergy. Indeedee, although not a super oppressive Pokémon on its own, gets access to the Psychic Surge ability, setting up Psychic Terrain on entry to power up its Psychic-type moves and negating priority moves. It comes in two unique forms: the male form that serves more as a tank, and the female form that is used for support. Both saw their uses throughout the year, but the female form’s access to Follow Me, which redirects all of the opponent’s moves to hit the user, as well as Expanding Force, a strong Psychic-type move that attacks both opposing Pokémon when used on Psychic Terrain, made it so that its partners could benefit from it in every way.

But when paired with Hatterene, Indeedee became absolutely dominant. Hatterene and its Gigantamax form are known for being notoriously slow but incredibly powerful, so with Indeedee around to take the hits, Hatterene could dish out all the damage. This strategy was empowered by Hatterene’s use of Trick Room, reversing the Speed of all Pokémon on the field, which could now be set up safely due to Indeedee’s Follow Me. Hatterene would then go on to use powerful moves at its disposal, including G-Max Smite, Max Mindstorm, and Max Flare. When combined with a damage-increasing item like a Life Orb, Hatterene could safely do its job while Indeedee made sure it was strong enough to do so.

Although Trick Room is now more commonly seen on Pokémon like Dusclops and Porygon2, the combination of Indeedee (female) and Hatterene is still nothing to scoff at.

Looking ahead into 2021, there will be numerous Legendary Pokémon slowly returning into the meta, such as the notorious Landorus Therian Forme and Cresselia. But Sword and Shield’s new kung-fu bear Legendary, Urshifu, has already been making quite a statement, and is fitting into the VGC format in unprecedented ways.

Urshifu, introduced via the Isle of Armor expansion, has two forms: the Fighting/Dark-type Single Strike form and the Fighting/Water-type Rapid Strike form. Each has its own signature move, but both share the same game-breaking ability Unseen Fist, which enables Urshifu to attack its opponent’s even if they use moves like Protect or Detect. It already boasts an impressive Attack stat, so rendering opposing Pokémon’s manners of defense useless has allowed the Wushu Pokémon to outshine the competition. Both forms of Urshifu also have access to a unique Gigantamax form, with both of their G-Max moves being able to hit through the strongest protection move, Max Guard.

Urshifu’s Rapid Strike form shined at the Players Cup 2, where winner and former World Champion Wolfe Glick successfully utilized its access to its signature move Surging Strikes, a move that hits the opponent three times with each hit resulting in a critical hit. He partnered the Urshifu with Incineroar to ensure that it could withstand an attack, knowing that Urshifu’s Water-type G-Max move would not create rain and infringe on the power of Incineroar.

That’s not to say that Urshifu’s Single Strike form isn’t oppressive as well, as it is currently the most-picked Pokémon in the online VGC format with a 38.14-percent pick rate. Its signature move, Wicked Blow, only hits the opponent one time but is much more powerful than Surging Strikes and also always results in a critical hit.

Having a Pokémon that is able to attack its opponents regardless of their defenses has completely shifted the VGC 2020 meta, and it looks like these bears are ready to keep fighting well into 2021.