There still aren’t a lot of details out there about the new V cards coming to the Pokémon TCG in the first Sword and Shield expansion, but thanks to a few Japanese scans, a few cards in the first wave were revealed.

Outside of knowing that this new card type will be replacing GX cards and that it has a unique black color palette that will mesh with the Pokémon’s type, we now know that several legendary Pokémon will be the first V cards. Among those shown in the scan are Celebi, Tapu Koko, and Victini, which means the first Galar set won’t focus on only new creatures from the region.

We know seven Pokémon will be coming as V cards in the first set after this reveal, five mythical Pokémon and the title legendaries from the upcoming game, Zacian and Zamazenta.

Because this new card type is replacing what was arguably the most effective and integral part of the Pokémon TGC meta for so many years, it is easy to speculate that these cards will function similarly to GX cards. We already know they will have V specific abilities and moves and will cost each player two prize cards when knocked out. 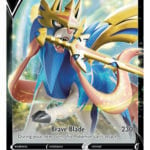 There is also the matter of whatever a V-MAX is, since something of that name was teased in the original reveal video. This could be a way to increase the power of V Cards further by evolving them into another stage or adding new abilities.

As of now, only legendary Pokémon have received V cards, which could end up being a trend for the first several sets. If The Pokémon Company wants to diversify the game away from just using specialty cards, putting better base cards in the game could help.

The first Pokémon TCG set for Sword and Shield has no firm release date, but December is looking to be the prime spot for it to capitalize on the game’s release on Nov. 15. There will be a Pokémon TCG: Galar Collection dropping with the games, but that is not a full set.