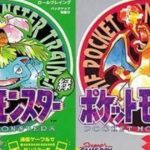 Designing a game is one thing, but creating a franchise and turning into an empire is another.

While it may be relatively easy to attract masses during the information age, it was a whole different world in the ‘90s. Pokémon first came out as an RPG for Nintendo’s Game Boy, and after a local launch in Japan, the attention surrounding the future third best-selling video game franchise started to increase.

The anime adaptation of the first titles allowed the Pokémon fever to cross continents. Alongside early adaptors, a chunk of the player base was introduced to the series through the anime series, which also shaped many fans’ childhoods.

The Pokémon franchise’s core titles were released in generations. This meant that each game had different Pokémon and characters. This evergoing cycle kept the masses coming for more while also increasing the Pokédex’s size. Trainers naturally wanted to continue catching them all, and they were also hooked by the new storylines.

There’s no doubt that excellent developers took part in making each Pokémon game, but there’s another factor that was key to the franchise’s success. Controlling the hype and enthusiasm around your franchise is another critical factor that makes or breaks series. Too much or too little of anything can easily reduce players’ interests, and Pokémon did it just right.

There are over 15 games in the main franchise and countless spin-offs, with Pokémon Go taking the crown for being the most popular one.

Here are all the Pokémon games from the core series in chronological order.

Originally released exclusively in Japan, Pokémon Red and Green were practically the fire-starters of what would evolve into a phenomenon. Debuting with the first 151 species of Pokémon, the game featured the core mechanics of training, capturing, and battling Pokémon. The ultimate goal was to become the best by conquering the league and completing the Pokédex.

After its initial domestic success, it was an inevitable for Pokémon to hit the shelves around the world. Pokémon Red and Blue were essentially the refined versions of the original titles. The more polished versions of the game featured the same mechanics as the first titles.

While the initial Japan release carried signs of future success, 1998 versions showed the full potential of the Pokémon franchise and the heights it can climb up to in terms of popularity.

As the Pokémon franchise started building its global dynasty, its anime adaptation allowed it to reach all parts of the world. The number of new players looking to try out the games after seeing the anime were at unimaginable levels. It would only be right to offer them a similar experience.

Still not much different from the first titles in most ways, Pokémon Yellow featured Pikachu as an on-screen companion that followed players as they roamed around the world.

New hardware enables developers to take their games to the next level. Nintendo’s Game Boy Color was a revolutionary product since gaming on the go meant playing on black and white color palettes until that point in time.

Alongside a new look, an additional 100 new Pokémon were added to the game, labeled as the second generation of Pokémon. Pokémon Gold and Silver also increased replayability by allowing players to travel back to the Kanto region to take on the eight original Gyms after completing the story.

Starting with early 2000, Game Freak started to focus more on giving players more options to customize their gaming experience. Pokémon Crystal was the first title in the series that let players choose their gender before starting their adventure.

It was about time Nintendo released a Pokémon game on Nintendo Game Boy Advance, and it did so by introducing a new generation at the same time. The third generation of Pokémon added 135 species to the franchise.

The map was noticeably more detailed and the introduction of two-vs-two battles was a breath of fresh air for anyone looking to become the very best alongside their friend.

The Pokémon franchise was growing without any stopping indications, but there were still people who hadn’t experienced vanilla gameplay. The first titles were still in good shape, but they started to look slightly outdated.

Pokémon FireRed and LeafGreen came to the rescue, however, as practically a remake of the first Pokémon games for the Nintendo Game Boy Advance.

Pokémon Emerald could be considered as a DLC for Pokémon Ruby and Sapphire. Alongside refining the base gameplay experience, Emerald added the Battle Frontier area where trainers had a chance to battle other trainers for Battle Points. These points could be used to unlock in-game rewards.

It was finally time for the Pokémon franchise to make its first appearance on Nintendo DS. The console’s dual-screen functionality prolonged the development process for the new title, but a new generation of Pokémon was more than enough to make up for it.

Pokémon Platinum was a follow-up title for Diamond and Pearl. The game invited players back to Sinnoh in an alternate dimension in addition to the more refined gameplay elements. The most notable changes were the different versions of the existing legendaries and the new legendary Pokémon, Giratina.

The first remake in the series was a remarkable success. It was a pleasant welcome gift to the late adopters of the series, and there was no reason to stop doing it. Pokémon HeartGold and SoulSilver were the 2010 remakes of the original Gold / Silver.

The remake’s most notable feature was that it allowed players to choose the Pokémon that would follow them as they moved around the map. The storyline also included some bits from Pokémon Crystal, enriching the overall gaming experience.

Though this wasn’t a console upgrade, it was about time to release another generation. The fifth generation of Pokémon added 156 new entries to the Pokédex and a new region named Unova.

New battle types were also introduced, like Triple Battle and Rotation, spicing up the core gameplay for the series’ veterans.

The title invites the players back to the Unova region two years after the events that unfolded during the first Black and White games.

Pokémon X and Y was also the first title to fully feature 3D graphics for environments, and the addition of Mega Evolutions was an excellent inclusion for the trainers who’ve mastered the Pokédex.

Introducing new generations and mechanics didn’t hold back Game Freak from designing remakes, and the remake cycle continued to grow with the introduction of Pokémon Omega Ruby and Alpha Sapphire.

In addition to its more refined graphics, Pokémon Omega Ruby and Alpha Sapphire also featured only battling and trading, allowing players to experience the original game with its full glory.

The storyline of the game requires players to complete trials before they could challenge an island’s Kahuna. Despite being relatively similar to the original storyline, the change ended up being controversial at the time.

Pokémon Sun and Moon got a sequel only a year after its release. The Ultra variation of the title featured an alternate storyline with new characters and Pokémon species. These fast sequels have been essential for players that finish Pokémon games in a breeze while also allowing players to be a part of the storyline from multiple angles.

The Nintendo Switch was a game-changer for Nintendo both in terms of games and consoles. The Switch quickly became one of the most selling consoles in the world, introducing many gamers to the Nintendo universe for the first time.

With masses dipping their toes into what Nintendo had to offer for the first time, it wouldn’t be right to kickstart them from the seventh generation of  Pokémon games.

Pokémon: Let’s Go, Pikachu! and Let’s Go, Eevee! are essentially remakes of Pokémon Yellow. Despite a similar storyline, the game took inspiration from Pokémon Go and designed most of the core mechanics around the popular spin-off.

While a remake of Pokémon Yellow helped introduce more fans to the franchise, veteran players were itching for a new adventure, especially on their Nintendo Switch. Pokémon Sword and Shield introduced the eighth generation of Pokémon and impressive 3D mechanics to the series.

The new Max Raid Battles increased the game’s online replayability and the Dynamax evolutions gave trainers something to look for when it comes to developing their squad.